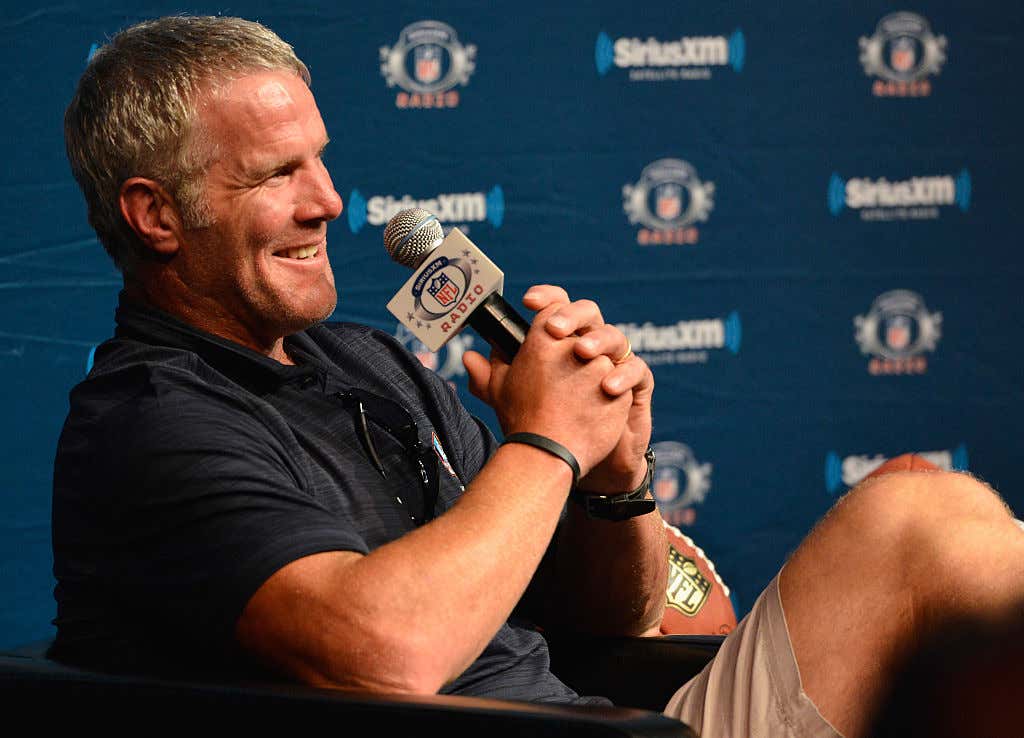 Before we get to the meat of the story, I feel it's necessary to point out that I love Brett Favre. This isn't a new love, it's a love that has run deep since 1993 when I was just 7 years old. It's also important to note that when I love, I love hard with fierce loyalty, sometimes to a fault.

I spent the better part of my youth OBSESSED with The Backstreet Boys. I listened to their music all day, every day for about 6 years. If I was home, their cassettes were blasting through my boom box. (Not so much in the car though. My moma obliged me in the beginning but soon grew so fucking sick of them, the car was off-limits.) My bedroom walls were covered with so many posters, you couldn't even see the actual wall. If anyone ever claimed NSYNC was better, well, God bless 'em because it was on!

If that wasn't crazy enough, I would never - and I do mean NEVER - listen to NSYNC because I felt that would make me a traitor. I mean, what if they (I don't know who "they" are) were somehow spying on me to see if I was really a BSB fan and they caught me listening to NSYNC? They would revoke my #1 fan card forever and then what would I do? I wasn't allowed to go over to other people's houses, so it's not like I had any friends to comfort me! All I had was my undying love for 5 grown-up men who promised me everything would be ok as long I loved them.

So, yeah, I guess you could say my loyalty is pretty serious.

Which brings me to the current Brett Favre situation.

I'll be honest, when the rumors started a few days ago, I didn't want to talk about it because I didn't want to jump to any conclusions. Why? For one, because I didn't want to believe them. Could Brett Favre be capable of essentially stealing $1.1 million in welfare money from the people of Mississippi? Nope. It just seemed too ridiculous to believe that Favre - a good ol' country boy who has always given back to his community - would turn around and knowingly take money out of the mouths of people who really need it, in one of the poorest states in the country.

Secondly, there are three sides to every story: his, hers and the truth. What was Brett's side of this? Why would he accept a total of $1.1 million for speaking engagements he not only did not speak at, but wasn't even present for?

And according to Mississippi State Auditor Shad White via CBS:

White emphasized that Favre has not been accused of any wrongdoing. "To date, we have seen no records indicating Mr. Favre knew that TANF was the program that served as the source of the money he was paid," he said.

You know what, I believe Favre didn't know where the money was coming from. He agent is notoriously old school and it's common knowledge that Brett trusts him 100%. It's very possible the money showed up in Favre's account in two sperate increments and he didn't pay much attention to it - either because he has someone managing his money and pays them to pay attention, or because he figured it was from a speaking engagement that hasn't happened yet.

Obviously you and I would notice deposits of $500k and $600k and want to know where they came from, but we're poor, Favre is not. Let's not forget the time Dave accidentally left $10K cash in his room in Minnesota during the Super Bowl because it slipped his mind. You think I would ever absent-mindedly leave $10,000 cash behind because, whoopsie, I forgot? Absolutely not! The whereabouts of that money would be the ONLY thing on my mind. But again, I'm not rich.

What Favre IS guilty of is not surrounding himself with people who know better. His agent and manager should know exactly who is paying him and where the money is coming from. If a non-profit is paying him $500k for one speaking engagement, they should probably find out where their funding is coming from, especially if the group is so shady that:

…a former Human Services director and five other people were indicted on state charges of embezzling about $4 million in what White has called one of Mississippi's largest public corruption cases in decades.

The important thing is that once Favre DID become aware of the situation, through an audit or not, he gave the money back.

"Today my office has received $500,000 from Brett Favre in repayment for TANF [Temporary Assistance for Needy Families] money he was paid through MCEC and a commitment to repay the remainder in installments over the next few months …" Mississippi State Auditor Shad White said in a statement. "I want to applaud Mr. Favre for his good faith effort to make this right and make the taxpayers and TANF families whole."

Am I a coward for not talking about the Brett Favre situation until today? If in the end things would have turned out poorly for #4, yeah, my blindly loyalty would have turned me into a coward, someone afraid to speak the truth because it was inconvenient. Fortunately, it doesn't take blind loyalty to see Favre's fuck up wasn't stealing money from those in need, but rather not paying more attention to his business matters. And in the end, he owned that mistake and put the money back where it properly belongs.

(Except for the 6 people facing criminal charges for stealing form the poor. Fuck you.)