Everyone in Chicago knows the name Ken Griffin.

Dear friend Carl has documented how giant the man's dick is numerous times.

If you've ever seen the STUNNING Lake Michigan in person, the bike/walking path that runs along the entire length the lake's city front was personally commissioned and paid for by Ken "King Dong" Griffin.

He's a big enough deal that he's pretty well known outside of Chicago as well.

There's a large contingency of Wall St. Stoolies, who obviously know the man, and his Hedge Fund, Citadel, and who will undoubtedly school us in the comments sections about what derivatives and p/e ratios I fucked up in this blog,

For everyone unaware, here's a bio -

Citadel.com- In 1987, Ken Griffin, a then-19-year-old sophomore at Harvard University, started trading from his dorm room with a fax machine, a personal computer, and a telephone. From this modest but ambitious beginning, Ken caught the attention of hedge fund pioneer and co-founder of Chicago-based Glenwood Partners, Frank Meyer, earning him the opportunity to establish what would one day become Citadel.

Ken founded Citadel in 1990 and has since served as the firm’s Chief Executive Officer. Today, Citadel is recognized as one of the most respected and successful investment firms in the world, and manages over $30 billion in capital for its partners.

As a leader within the Chicago community, Ken actively participates in civic and cultural institutions, serving on the Board of Directors of the Chicago Public Education Fund, and the Board of Trustees for the Art Institute of Chicago, the Museum of Contemporary Art Chicago, the Whitney Museum of American Art, and The University of Chicago. He is also a member of numerous business organizations, including G100, the Civic Committee of the Commercial Club of Chicago, and the Economic Club of Chicago.

Ken earned his bachelor’s degree from Harvard University and is a proud supporter of his alma mater. In 2014, he donated $150 million to support need-based financial aid at Harvard, the largest gift in school history at the time. 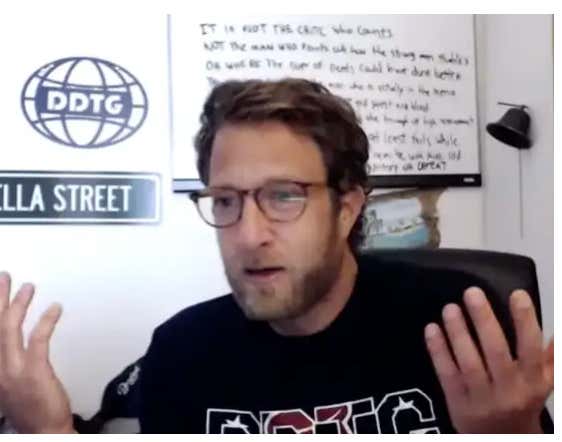 And he's also not one of those Billionaire douche bags who hoards his money because he uses the Forbes Richest People List as a dick measuring contest. He is extremely charitable. And a good guy in person. Everyone I know that's crossed paths with him at restaurants or at baseball games in Chicago has had nothing but nice things to say about the guy and how he treats people.

Now to the point of the blog -

Crains Chicago - It took a thousand extra servers, new trenches for fiber-optic lines and a bunch of rooms at the Four Seasons resort in Palm Beach, Florida, for one of the world’s biggest trading shops to cope with the pandemic—all accomplished in less than a week.

That’s part of how billionaire Ken Griffin’s Citadel Securities has kept humming at a record pace as Covid-19 upends finance, mostly abandoning its New York and Chicago offices and shifting dozens of employees and their families to a work-from-resort bubble. Others are at another emergency facility in Connecticut. The company doesn’t appear to have missed a beat, in March trading 3.3 billion U.S. shares a day and digesting a 90 percent jump in electronic Treasuries volume even as liquidity dried up in many places.

“It’s infinitely easier for us to manage our affairs as a market-making community in a world of distributed computing, the internet and electronic exchanges, he said. “At 100,000 feet, our customers’ experience was as close to flawless as you can get across markets,” he said of the company’s trading in recent weeks. “Giving people a fair and transparent price every day is our mission, and we accomplished that.”

For the mouthbreathers who bitch about having to read 3 internet paragraphs then stamp TLDR 3 seconds after the publish button is hit on a blog, and the poors who don't know what Crains is- here are the cliff notes of the article for ya.

Big Dick Kenny moved his whole crew to the Four Seasons in Palm Beach so they could keep working in a consolidated place. It took a thousand extra servers, new trenches for fiber-optic lines and a bunch of Four Seasons suites for one of the world’s biggest trading shops to cope with the pandemic—but they got it all accomplished in less than a week. Of course, running multiple trading floors—including one at a luxury five-star hotel that in normal times boasts yoga classes, poolside cabanas and private surf lessons—doesn’t come cheap. But doing so has paid off for Citadel. March was an enormously busy month in the markets as the coronavirus panic spread quickly, and Citadel Securities seems to have kept up with it. U.S. stock volume amounted to more than 15.5 billion shares a day, with the company accounting for about a fifth of that. "Its monthly average was about 65% higher than its busiest day in 2019." Between the ease in trading Treasuries and Citadel's stellar record, they are now poised to emerge as the newest member of the elite bond trading club known as "the primary dealers."

So long story short Ken takes a situation as dire and grim as a global pandemic and economic collapse and spins a monumental success out of it.

Why can't this guy run for Illinois Governor?