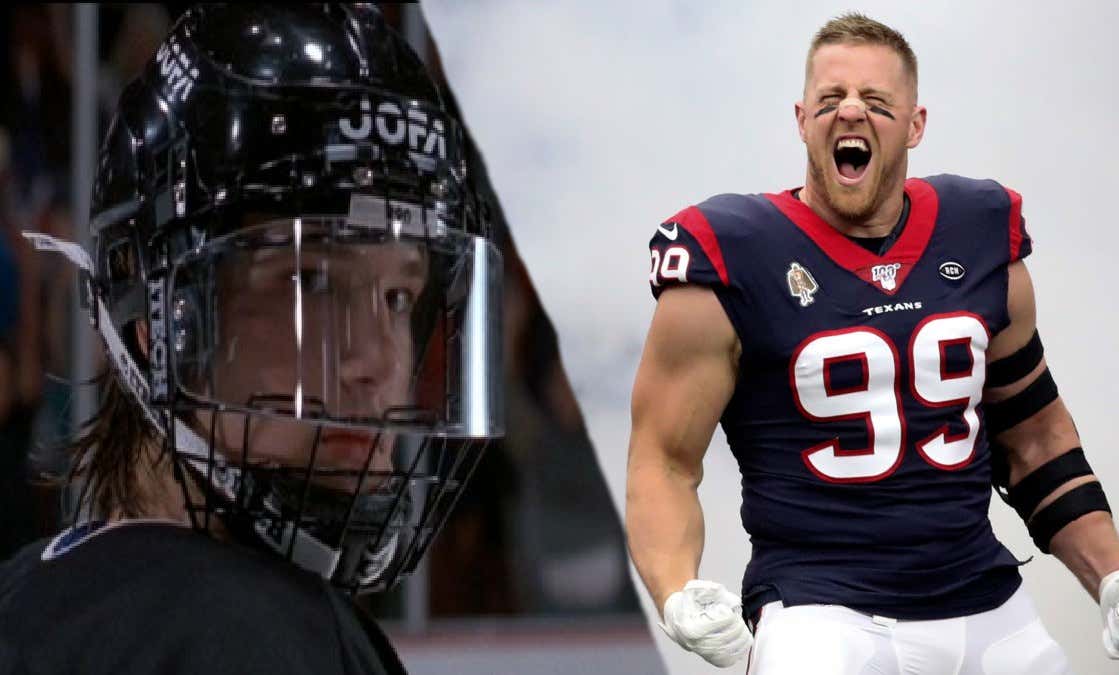 JJ Watt recently did an interview with Sports Illustrated. It was super long so I didn't actually read it. What I did do, however, was peep this one response that JJ gave on the topic of most memorable sports movie scenes. And after reading this answer, I think its safe to say that if it weren't for the fact that he's a Defensive Player of the Year caliber athlete in the NFL, that JJ Watt could have had an incredible career as a movie critic.

SI - Mighty Ducks 2 is my favorite movie of all time. The shoot-out against Iceland in their Junior Goodwill Games final where Gunnar Stahl does the triple deke, which doesn't even count as a triple deek because he stopped and took a slap shot at the end. He takes a slap shot and then the camera cuts to Julie Gaffney's glove, which is closed. You never see the puck go into the glove. Also, the whole crowd is dead silent until she flips the puck out of her glove, like they would have known if the puck hit the back of the net or not. I loved the movie overall, but that one scene, even as a kid I was like, that was, that was poorly made. They didn't think that all the way through.

In the history of takes, I can't come up with any that have ever come close to how correct this one is. The only other take that comes to mind is when Rebecca Black said "yesterday was Thursday. Today it is Friday. Tomorrow is Saturday and Sunday comes afterwards". For the most part, that take has held up through the test of time. Still hasn't gotten OldTakesExposed on that one. But still. JJ Watt drilled this one right through the center.

I mean this scene had it all. I've watched it approximately 985 times and I'll still be on the edge of my seat on watch #986. You've got the best player on Team Iceland and that maniac Bombay decides to throw a cold goaltender between the pipes. That sick son of a bitch. So much build up and anticipation to that moment. Your anxiety builds with each stride that Gunnar Stahl takes toward the net. The moment he slams on the brakes in the slot your heart is ready to burst right out of your chest. As you await for Julie the Cat to finally reveal that she gloved the shit out of that clapper, you're sure that you are going to die. But the moment that puck hits the ice and its not in the back of the net, you are immediately overcome with such an intense rush of joy and exuberance the likes of which have never been felt before. Everything about this scene is perfect aside from the fact that Gunnar Stahl inexplicably stopped in the middle of this shootout attempt to wind up for a slapshot, and that for some reason nobody in the crowd could piece together that Julie made the save in the 13 seconds between the shot and when the puck hit the ice. But other than that, this is the greatest scene in cinematic history let alone just sports movies.

Credit to JJ Watt for being the most correct man on planet Earth.