I'm one of the biggest recruiting guys out there. I've made my stance incredibly clear, time and time again:

That being said, I do understand the complaints of the anti-recruiting crowd. I think the crowd of "development over recruiting" are wrong, but their point does make sense. It's like your high school football coach who always used to say "hard work beats talent when talent doesn't work hard." Well, Coach Martinez, what happens when talent works hard? Then you're Alabama.

SOURCE-Seventeen of those 33 prospects eventually became a first-round pick in Tuscaloosa. That’s 51.5 percent for those playing at home. That number doesn’t factor in the six other Crimson Tide five-star draftees that went off the board in Round 2.

Let’s provide some perspective for that number.

Of course, development is incredibly important. You can't just get 5-stars and be good. You need to continue to develop their freakish talent. Nobody does it like Nick Saban.

Take away Alabama’s 33 five-star players from that 2008-17 window, and there are 226 eligible five-star recruits. Some schools had many (Florida State: 24) while more than a dozen had just one or two. Taken together, the number of first-round picks from that group is 48. That’s a 21.2-percent hit rate.

Here is a look at some other schools: 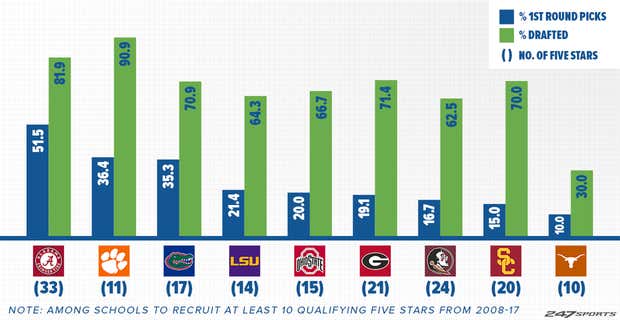