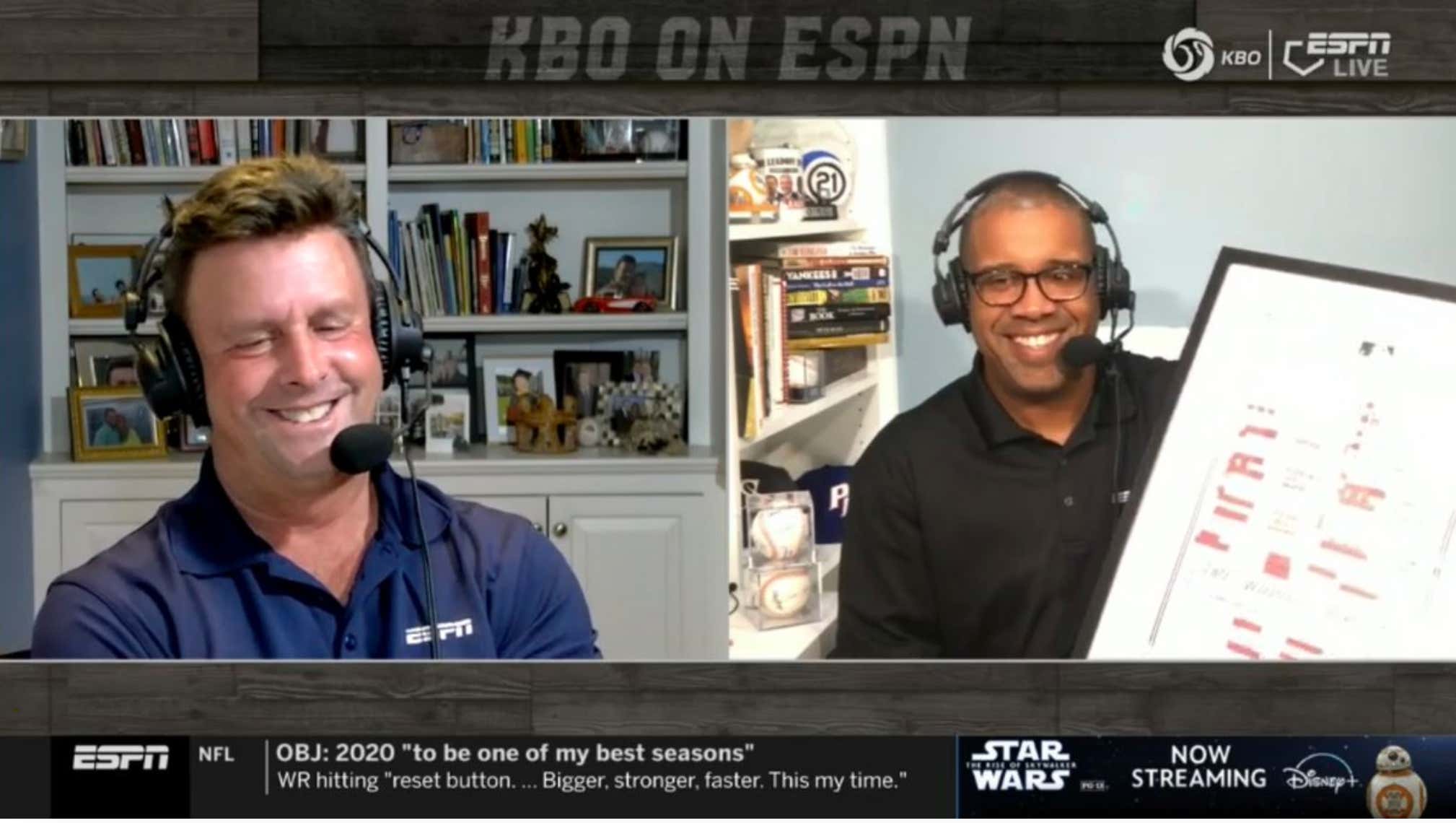 Last night at 1:00 AM ESPN aired their first ever KBO baseball game to entertain America. This was the first live sporting event the U.S. population had the chance to watch and enjoy on TV in quite some time. Karl Ravech and Eduardo Perez were tasked with guiding us through all the quirks and weird situations that come with South Korean baseball.

When SVP's midnight SportsCenter went off the air the attention shifted to the KBO where of course we were greeted with puddles of rain. A RAIN DELAY! So not only were Ravech and Perez forced to stay up late at night in their own homes calling these games, but now they had to stall until play started. You could tell Ravech was having one of those "how the fuck did I get here?" moments. Luckily for them, former KBO star and now current MLB slugger Eric Thames joined the telecast to hang out and pass the time with them. Good on Thames, such an awesome move to give the fellas 20+ minutes of his time when he easily could have been fast asleep.

Eventually play resumed and baseball got underway. So how did Ravech and Perez watch the game? The same way we did, on their TVs. In the top of the first inning a ball was hit down the left field line and caught up against the wall, but the camera angle wasn't ideal so no one actually knew what happened at first. Ravech discovered it was caught only when we all saw the left fielder throwing the ball back on the field. Many times Ravech and Perez could be heard talking over each other to no one's fault at all. That's just how Zooms and Skypes go. It's impossible to avoid. Only for this Zoom sesh they were calling a professional baseball game for millions of people. Credit to them, they made the most out of nothing after being thrown into a forest fire. There was actually a fire at one of the games!

At some point in the middle innings both their monitors went out! The only source of the game they had at their disposal was sound. We were at home watching on our TVs while the announcers had no clue what was going on for a few at bats. A dragon could have came down from the heavens and lit everyone on fire and poor Ravech would have had no idea. What a shit show.

I feel so bad for these two guys having to put up with all of that last night/this morning but I'm really happy they did. It was good to have baseball back and they helped make it happen and enjoyable. I was thoroughly happy watching my favorite sport last night. I was already big fans of Ravech and Perez, but that respect just went even higher. As the games progress they'll get more of the hang of it all, but we got through night one and that's all that matter. Oh and the Dinos kicked ass and shutout the Lions.