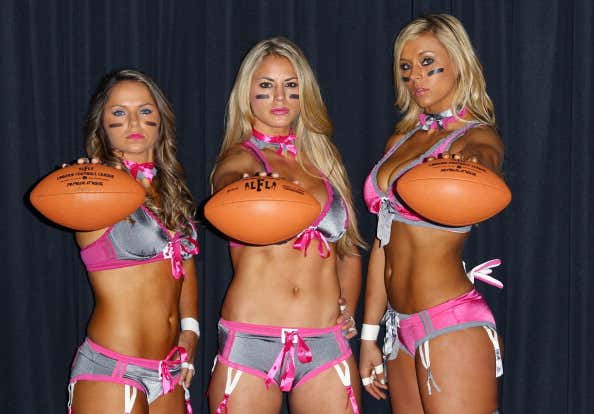 We've stood helplessly by while coronavirus has claimed one sporting event after another. And even one entire league, Vince McMahon's tragically ill-timed reboot of the XFL. And in the midst of an national debate over whether some part of the NBA and NHL seasons, when MLB can re-open and even whether the NFL and college football can begin on time, I'm holding a faint glimmer of hope that one brand of football can return to spare us from a summer without sports: Women's football.

This video dropped a few days ago. You might not have heard of the Extreme Football League, aka the X League, but you can be forgiven for that. It's the latest re-branding of the former Legends Football League which was formerly the Lingerie Football League. Which in of itself was formerly simply the Lingerie Bowl before some visionaries realized there was a national appetite for an entire league of strong, empowered, female athletes playing the greatest game God ever invented.

Well X League is scheduled to start on Saturday, June 20th, with the Seattle Thunder visiting the Atlanta Empire. According to the league's official website, tickets are available.  I can find no press releases saying otherwise. As you can see from the video, rosters are set. Eight teams from across the country, from LA to Atlanta, from Chicago to Austin. If their inaugural season goes off as scheduled, it might be exactly the boost this sports-starved nation needs.

The incredible feats of athleticism:

The fights among these proud, fierce warriors:

Obviously we all want the X League opened in a safe, contagion-free environment. So hopefully it can be done in a responsible manner. But I think we absolutely need it in the same way FDR kept pro sports going during WWII. Granted the situations are different. But the need for a great, national morale boost is the same. As is the need to show the world our way of life goes on. And we will continue celebrate those uniquely American institutions like women's professional football because it's part of who we are.

Until then, stay safe everyone. Especially you X League athletes. So we can get this going on time.