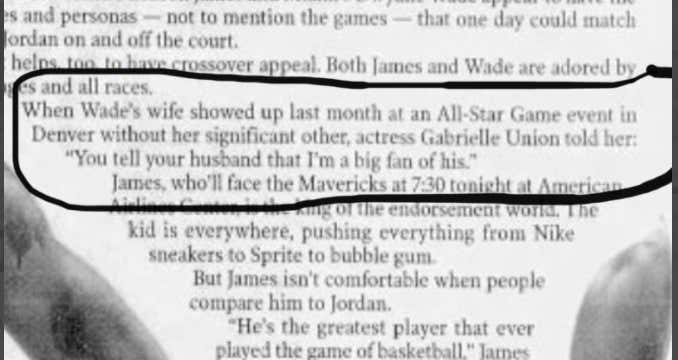 Like the Mickstape boys said. What a cold, cold world we live in. This is a newspaper clip from 2005. 2005! Sure you may read this and say 'well what's the big deal? Maybe she just liked Marquette or the Heat.' But you have to say it in Gabrielle Union's voice:

That's someone calling her shot. That's a warning shot to Wade's ex-wife. I respect it. It also makes more sense that Dwyane Wade went on IG Live and willingly called her an ex-thot too

And then fast forward a little over a decade later:

Just goes to show you that no matter who you are, a celebrity will take your guy. We're talking about Gabrielle fucking Union here. A legend of the game. She's been around forever and always been a smoke. If she comes around and says she's a big fan of your husband, just know a decade from now they'll be married. Can't prove it wrong.