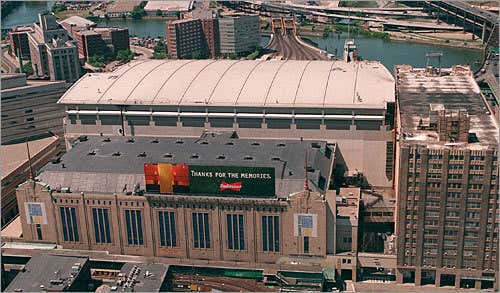 It is the end of an era as the Boston Celtics play their final game at the Boston Garden. The end for the old Garden comes with a whimper, as the Celtics are eliminated in the first round by the Orlando Magic in four games. The Celtics lose their final game 95-92. The Boston Bruins last game would come nine days later, a 3-2 loss to the New Jersey Devils, leading to a first-round exit.

Three days later, the Boston Bruins hosted the Montreal Canadiens in the first NHL game in the new arena. The Garden was overflowing that night, as 17,000 fans were on hand, more than 2,000 above the arena’s capacity. The Canadiens won the game 1-0, as fans broken doors and windows to get in to watch the game. The Bruins would go on to win the Stanley Cup in their first season at the Boston Garden.

The Boston Garden was owned and operated by Tex Rickard’s Madison Square Garden company until 1934 when a local cooperation purchased it. George V. Brown was put in charge of the building until he died in 1937. At which point, his son Walter A. Brown began to operate the building. Nearly a decade later, Brown would join a group of arena operators to create a basketball league called the Basketball Association of America. After their founding in 1946, the Celtics became the most successful team in the NBA, winning 11 NBA Championships in 13 years, including eight straight from 1957-1969.

Over the years, the Boston Garden got a reputation as a house of horrors for visiting teams from the parquet floor, which had a million quirks, that some thought it actually housed a leprechaun that would make the ball bounce Boston’s way. The Boston Garden also had cramped visiting lockers, with inadequate heating and air conditioning, as visiting players were forced to take cold showers. In the 1985/86 season, the Celtics won a 16th NBA Championship, losing just one game at Boston Garden all season.

By the time 1995 arrived, the Boston Celtics’ dynasty was over. Tragedy followed the 1986 championship as Len Bias pass away just days after the 1986 NBA Draft. Reggie Lewis, another star in Boston, died due to a heart defect while working out before the 1993/94 season. Larry Bird had retired after the 1992 Olympics, with Kevin McHale retiring a year later. Robert Parrish meanwhile left to play for the Charlotte Hornets.

The 1994/95 Celtics made the playoffs despite a 35-47 under coach Chris Ford. Facing the top-seeded Orlando Magic, the Celtics stole Game 2 in Orlando but could not defend Shaquille O’Neal as the Magic took the series in four games. Shaq had 25 points with 13 rebounds to lead the way for Orlando, while Dominique Wilkens had 22 points and 18 boards to lead the way for Boston.

When the Fleet Center opened the following fall, the infamous parquet floor followed. However, the floor had begun to show its age as players wore down faster. In 1999, the Celtics finally got rid of the floor that they had used since their first game in 1946. Replacing it with a lookalike that now was more modern and forgiving on players’ knees.