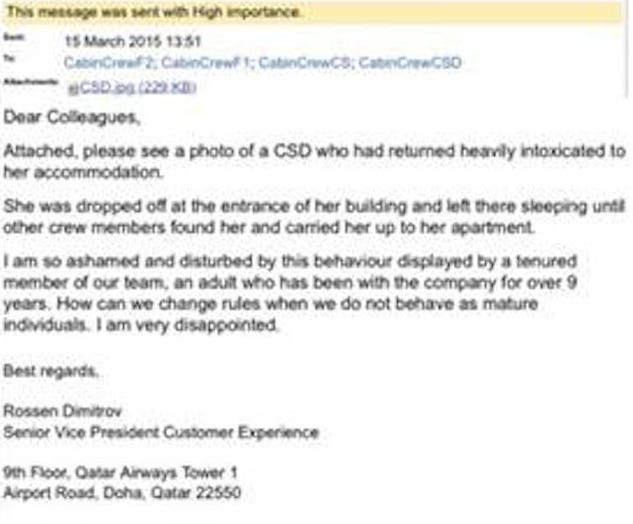 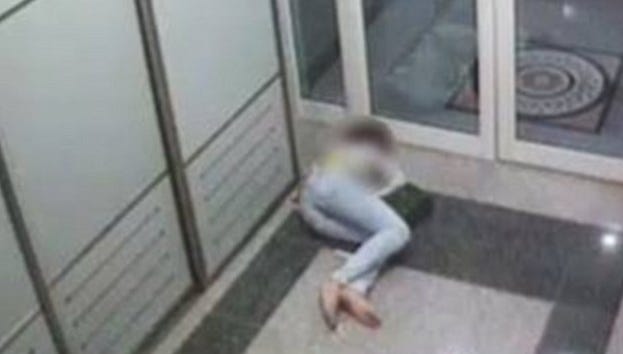 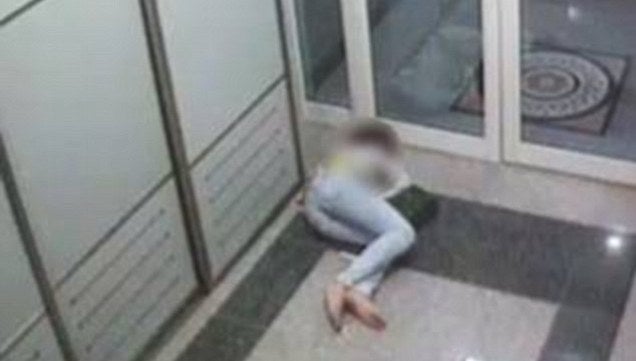 (Source) – According to reports, a rude Qatar Airlines executive forwarded the entire company an image of one of his employees passed-out drunk this weekend. The security camera screenshot was allegedly sent out by vice president Rossen Dimitrov, who also typed up a smarmy note about the woman, who was apparently based at the company’s headquarters in Qatar, where drinking is legal for non-Muslims, but frowned on by many. The airline reportedly confirmed the email was real and defended the exec’s reply-all tactic as making effective use of a “teachable moment.” The spokesperson added: “In this particular case, the individual concerned was found in a state of incapacity by the entrance of a Qatar Airways staff building. “The vast majority of our cabin crew would themselves be disappointed at the idea that one of their colleagues should get into this situation, since they share our pride in the reputation of our team, and they would also, as we are, be very concerned about the safety implications for someone in this position.”

Should you get shitfaced in a country where drinking is illegal for nationals then show up at your staff building and pass out in the hall? No, probably not. But fuck this boss and fuck anyone else who takes pictures or shares things done by blackout drunk people. Once the first sip of alcohol hits your lips, you have immunity. That’s a law and you can look it up if you don’t believe me. The people who send the “hahaha look where so and so passed out” pics and the “oh my god look what whatever his name is texted me last night” are the biggest assholes on earth. If someone got a little drunk and maybe did a few regrettable things, don’t share them with the world. Don’t even share them with that person. Just don’t be that “look what happened last night” person. No one likes them. They ruin brunch with all their gossip, and the person who ruins brunch is the devil. “YOU SHOULD’VE SENN WHO YOU WERE MAKING OUT WITH AT THE BAR LAST NIGHT… LOOK!” Hey man, listen, I’m not here to talk about the past. I’m here to eat my chicked and waffles, have a couple bloodys and get back to even. What I did when I was blackout is ancient history, leave it alone.