What a difference a few hours can make.

Rob Gronkowski and Camille Kostek joined Big Cat on the YouTube Live broadcast Bud Light Seltzer Drafterparty, where he said, among other things, “I was in a Tampa Bay Buccaneers playbook four weeks ago, and I wasn’t even on the team.” Meaning, when he was still the contractual property of the Patriots. Which I guess could've been the low pressure system that started a Category 5 shitstorm if anyone truly cared. Or if Patriots fans were ever in the habit of getting worked up by things Gronk says or take them seriously.

But it seems Gronk felt enough breeze building from a potential shitstorm that he decided it to bomb it out of existence before it made landfall. 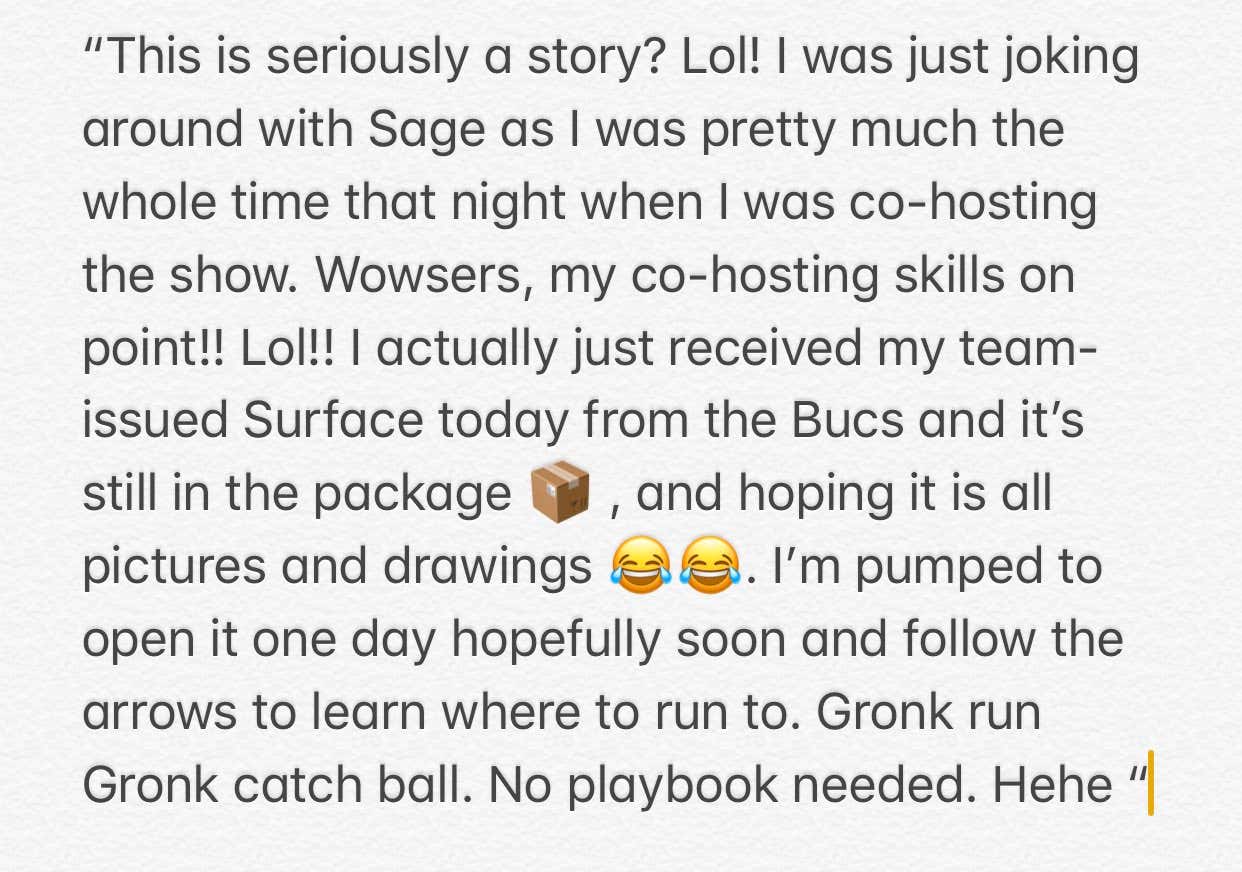 Wowsers, indeed. If Gronk could've backpedaled that fast two years ago, he would've made the tackle on the Miami Miracle. But that's neither here nor there. This is how it's done. This is how you defuse a situation before it potentially turns into something. You don't release phony statements written by team lawyers and pass them off as your own. You don't issue carefully crafted insincere apologies. You talk in Gronkspeak. Complete with emojis and lols and heavy on the exclamation points and self-deprecation, and you turn this thing into the nothingburger it always was.

That said, I wouldn't doubt Gronk and the Bucs knew damned well he was coming to Tampa a long time ago. Brady clearly had his mind made up long before he signed with them. And nobody involved could've gotten it done without getting Belichick to sign off on the arrangement. So I don't think any of us are naive enough to believe it all came together at the last minute. And there's nothing sketchy about that. Gronk busted his ass here - almost literally - for 10 years. If he wants no part of the grind in New England but wants to have fun with his bestie under the palm trees on the Sunoast and you can get a 4th rounder for him, why burn the calories it takes to worry about when he got his digital playbook?

Instead, let's get back to worrying about important things, like handjobs and pointing a camera at the Bengals' sideline. As far as we know, those scandals are still ongoing.