Gay Pat wrote about the different methods India has used to keep people inside during the pandemic, namely treating its people like circus elephants with whips and cattle prod looking things:

But those methods didn't seem to scare all of the Indian people into staying in their homes. They had to crank the heat to 100 degrees by humiliating them on the internet earlier this week:

A man in Chhattisgarh decided to livestream on Facebook while he broke the lockdown restrictions, as punishment, when he got caught, police made him post pictures on his page about the arrest, too.

On Sunday night, Soni decided to go out on a joyride in his car, breaking the nationwide lockdown imposed due to the coronavirus pandemic.

The police made the accused write on his Facebook page that he has been arrested by Mandir Hasoud police, English news channel, The Times Now reported.

"Last night, I broke the lockdown and did a Facebook live. And now as a responsible citizen, I have surrendered before the police and [got] arrested," the caption Soni posted read.

There's eye for an eye, and there's eye for an eye. This is a classic case of an eye for an eye. Bravo India! Bravo!!! You wanna know how to get people to cut the shit and cower into holes (homes)? You humiliate them on the internet. That's eye for an eye pandemic control 101. Take it from me as I lost a battle with a piece of gum 5 years ago and STILL can't get people to shut the fuck up about that. Every time one of my asshole coworkers tweet about it or mention it in a blog or on radio, I decide not to show my face in public for weeks at a time out of sheer embarrassment. Internet humiliation is a dish best served cold, and India has it down in spades right now.

Oh and btw I know they didn't live stream his arrest technically, but the title is better if I said they did.

Wtf kind of police force has goddamn BMW's as their cruiser? 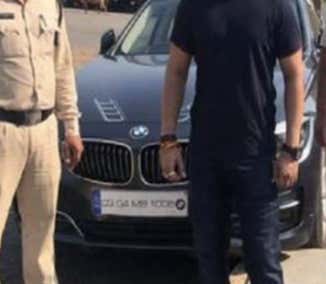 Or are they just posing in front of it to look cool? So many questions