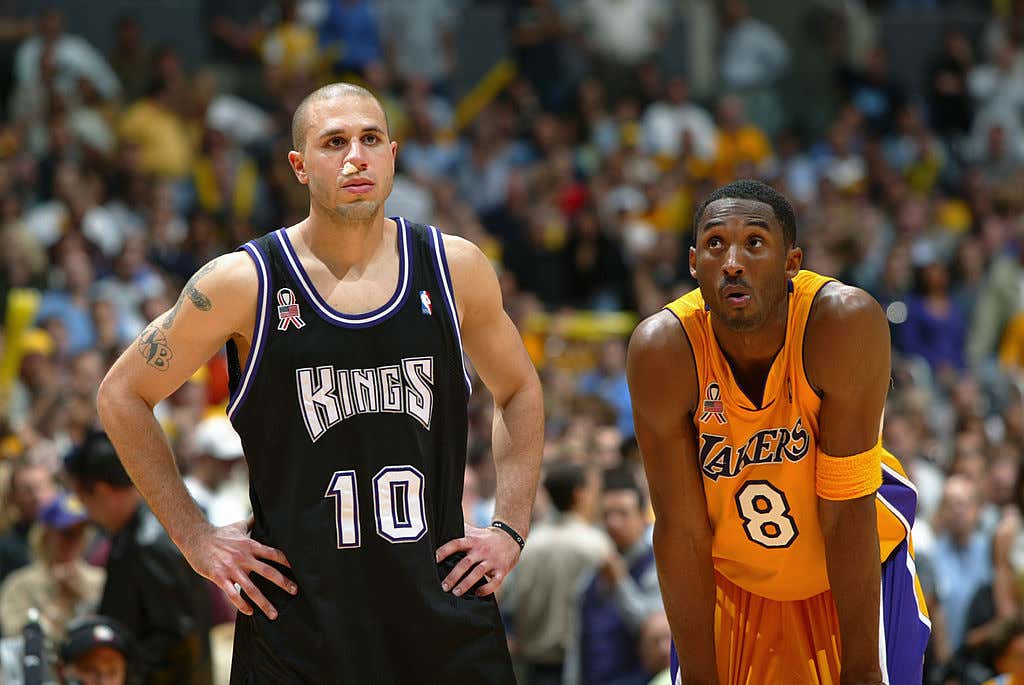 (Yahoo Sports) - The top end of the 1996 NBA Draft was star-studded, with Allen Iverson, Marcus Camby, Shareef Abdur-Rahim, Stephon Marbury and Ray Allen all going in the top five. But the best player to come out of this particular draft came at pick No. 13, just one selection before Stojakovic.

A Philadelphia high school player by the name of Kobe Bryant partnered with power agent Arn Tellem to get to the Lakers. According to long-time Kings front office man Jerry Reynolds, the Kings were preparing to select Bryant if the Charlotte Hornets hadn't traded the No. 13 pick to LA in exchange for center Vlade Divac.

"At that time, high school players weren't going that high in the draft as they did a little bit later." Reynolds recounted to Kings.com's Jordan Ramirez. "But Geoff made it clear to Kobe's agent, that if his client was there at No. 14 that we would take him.

"Kobe's camp told us that if he was drafted by the Kings, he wouldn't sign. Arn Tellem - Bryant's agent - said he wouldn't sign with several teams in front of us either because he wanted to play for the Los Angeles Lakers. Tellem had a relationship with Jerry West, who of course was running the Lakers at that time."

It was a battle of wits between Petrie and Tellem, one that according to Reynolds, Petrie intended to win.

"I know absolutely for a fact that we would've taken Kobe, and the only way that he wasn't going to play for the Sacramento Kings was the Lakers swinging a trade, and they did it," Reynolds said. "Tellem knew that Geoff Petrie wasn't going to back off like other teams. Kobe didn't care what position he was drafted, he just wanted to go to the Lakers."

The story of Kobe and his agent pulling some shady shit in order to get him to LA isn't exactly new. We've all heard about how he refused to sign anywhere else and didn't work out for certain teams all in an effort to join the Lakers. The 'wink wink' deal with Arn Tellem and Jerry West is pretty well known. Now one of the oldest moves in draft history is when your team doesn't get the chance to take a player that would prove to be an all time great, the narrative is you would have taken him if you had the chance. We see it all the time. There's no way to know if this story is truly what would have happened, but boy what a fun "what if" this is. Especially when you factor in what Kobe did to the Kings over his career.

In 56 career games against SAC Kobe put up averages of 26.5/5.9/5.2 on 45/33% shooting. That's tied for his 6th highest scoring average against all NBA teams. He was 3-0 against them in the postseason, obviously with the 2002 series being the most controversial. Can you imagine how much fun it would have been to see Kobe and Jason Williams play together? Remember, Peja didn't come over until the 1998-99 season and those mid 90s Kings teams were pretty bad so chances are they still would have been picking high in the 1998 draft. That's a duo that would have been amazing to see together. Then if that Webber trade still happens and you have Kobe/White Chocolate/Webber all on the same team? Maybe they actually do get over the hump and never trade for Mike Bibby. There's no Lakers dynasty. Perhaps how we view Kobe today is completely different.

That's a pretty good NBA "what if". This kind of reminds me of how everyone says Danny Ainge definitely would have taken Durant in 2007 and not Oden had the ping pong balls broke his way. Much easier to say once the world learned that Durant was one of the greatest players in league history and Oden....wasn't.

If I'm a Kings fan and I hear that story it's definitely a kick to the dick. Peja was a fine player in his own right, but he wasn't Kobe. If true, that's tough to stomach when you add in all the torture that soon came as a result of that Hornets trade. They did get Vlade a few years later which was good for them, but again we're talking about Kobe. It just goes to show that your favorite team can sometimes be one pick away from having an entirely different future. Something to keep in mind with the draft coming up.