No Country For Old Men was based on the book written by Cormac McCarthy. In the novel, set in 1980, Sheriff Bell - always concerned with justice and the law - drops the following line:

"The drug dealers don't even think about the law. It don't seem to even concern em. Of course here a while back in San Antonio they shot and killed a federal judge. I guess he concerned em."

While the novel may be fiction, the shooting and killing of a federal judge in San Antonio is not. And the person who shot and killed that judge in 1979 was none other than Charles Harrelson, father of Woody Harrelson. 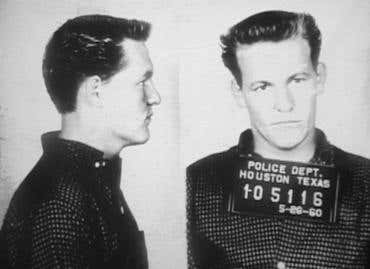 Throughout, Charles Voyde Harrelson, the man convicted of killing the judge May 29, 1979, with a single shot in the back from a highpowered rifle, appeared at ease, leaning back in his chair and offering the jury faint smiles…

After the verdict, Mr. Harrelson said, ''It's just a necessary step in the progression of things.''

I guess we know where Rust got his philosophical "time is flat" inspiration from. That Charles may have been a hitman, but he sure had a way with words! So much so, it appears that his son, all these years later, is walking around carrying the weight of his words and actions all over the place.

I mean, why would Woody want to act in No Country for Old Men if it's based on the book that mentions his father murdering a federal judge? Wouldn't that bring up a past most people would want to leave in the past? Even if the movie doesn't make specific note of it like the book does, the parallels between the film and his real-life are a psychologist's dreams!

Woody Harrelson plays Carson Wells, a bounty hunter who is hired to find Chigurh, a hitman who he describes as a "psychopathic killer." Except Wells doesn't kill him. Chigurh kills him right after he asks him, "If the road you followed brought you to this, what use was the road?"

COME ON! It's too easy. Of course having a hitman for a father is going to stick with you! How could it not??! And now, thanks to Woody's younger brother, Brett Harrelson, we get to hear a first-hand account on what it was like to be the "Son of a Hitman." (credit: EW)

At age 16, Brett Harrelson was supposed to get a fresh start. It was the late '70s, and Brett, the younger brother of actor Woody Harrelson, was sent to live with their estranged father, Charles Harrelson, after getting caught smoking weed in high school. But rather than being a stabilizing presence, Charles was embroiled in troubles of his own — the kind that would come to be described as a "crime of the century."

Forty years later, Brett is ready to talk about what he saw in the four months he lived with his father, and beyond. He does just that with investigative reporter Jason Cavanagh in the 10-part Spotify podcast Son of a Hitman, premiering May 5.

Imagine being sent away Fresh Prince-style to avoid future trouble, but instead of  "movin' with your auntie and uncle in Bel Air," you end up "movin' with your hitman father around the time of the murder that he was later convicted with two life sentences for." (I never said I was a rapper.)

"The podcast covers so much new things about my dad," Brett tells EW. "When I thought I knew everything, there's just been way more than I realized. It's mind-blowing."

Unfortunately, Woody will not be a part of the podcast as he, understandably, avoids the subject. Or maybe it's that he doesn't want to talk about something he doesn't think happened in the first place.

In a 1997 interview with Barbara Walters, Woody said the man "wasn't a saint," but that he was not given a fair trial. He said he believed Charles was innocent, and also noted that the man his father was allegedly working for was acquitted.

It also appears that while doing research for the podcast, new details were uncovered that should raise many eyebrows.

If so, the "Crime of the Century" may need a new name…