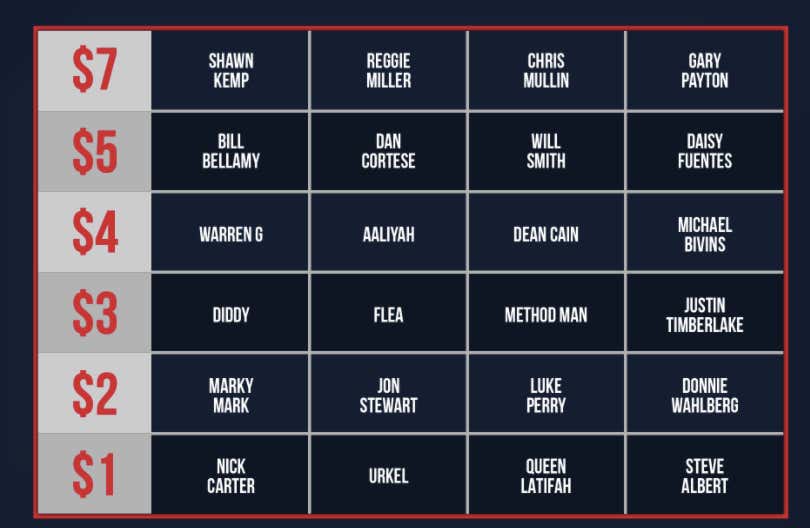 I've settled the "Jock" portion of my team. I will consider tending to the "Rock" segment later. 22-year-old Shawn Kemp made his RnJ debut in 1992. He had yet to make an NBA All-Star team. He took out his frustration on rockers and jockers alike:

He was going behind his back, dunking on literally everybody and running down children for chase-down blocks. Kemp's All-Star run (1993-1998) started right after his first RnJ appearance. Did dunking on a teenage Leonardo Dicaprio fuel Kemp to greatness in the Association? Did his appearance on MTV lead to a surge in votes? The world may never know. As is, Kemp is my high dollar item. So far, so good.

Bill Bellamy is tempting. It'd be tough to explain to anybody under the age of 30 how famous Bill Bellamy was once upon a time but he was everywhere. I'm going with Aaliyah here, a steal for $4.

What a fit! What a jersey, sized 8XLT for some reason! What a woman! What a pick, by me.

Another lost legend smh but another great pick by me. For the low price of $2 I get Luke Perry's face, his valuable face:

By far, the best choice of the $2 options. Though Jon Stewart and Jon Stewart's hair is tempting.

Another steal! Do you remember the random episodes of "Family Matters" where they would work in how nice Urkel was at playing ball in real life?

He was all of 5'2 and 74 lbs of hardwood wizardry. Shades of Allen Iverson, but also Steve Nash, Steph Curry, and Lebron James. And for $1!

Another steal off of the dollar menu! Kemp had few weaknesses in terms of RnJ….as a matter of fact, he only had one: Queen Latifah.

Queen "Kawhi Leonard" Latifah with the CLAMPS on yalls little Reign Man! Literal royalty! Of course, Queen Latifah is on my team.

Check out Barstool TGIF with Clem and Reags on Friday evenings. Check out our deep dive from Friday with KFC about Rock N' Jock: