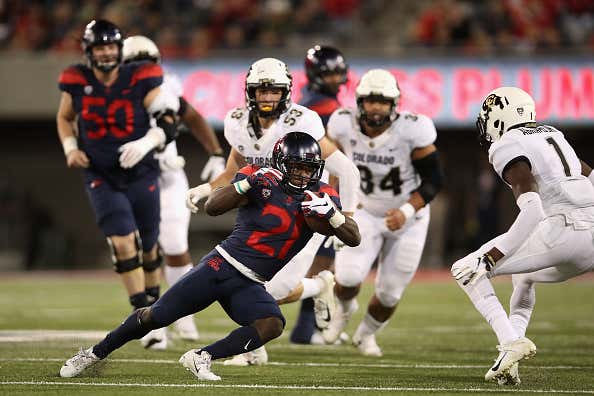 If there's one thing the Patriots have been lacking for a while now, it's your classic undersized, underdog, overachieving folk hero. The kind of player a Medium man in an XL world such as myself can latch onto and create an emotional bond with.

Believe it or not, Danny Woodhead was EIGHT years ago. Braxton Berrios was 5-foot-9 and never made it out of training camp. You might think Julian Edelman or James White, but they're 5-10. You'd maybe have to go back to 5-8 Kevin Faulk to find an example. And like Woodhead, Edelman and White, he was all of 200 pounds. So so much for the average-sized gentleman who sometimes inherits hand-me-up clothes when his teenagers out grown them [raises hand] being able to relate.

Which brings me to the newest addition to the Patriots' running back depth chart, undrafted rookie free agent JJ Taylor out of Arizona.

Checking in at just 5-foot-5, Taylor is 65 inches and 185 pounds of pure, undiluted, 100-proof excitement. To find anyone like him in Foxboro, I'd have to go back to Mack Herron. And I have no time to give you a history lesson about how he flashed in the mid-70s before Chuck Fairbanks got sick of his ego getting ahead of his production and dumped his tiny ass. The more pertinent question is how this guy slipped through the nets of seven rounds of the draft without somebody taking him.

At the Combine, he might as well have been wearing a Patriots t-shirt because he did all the things that draw Belichick's lustful gaze like Harriet Byrd turning her head to Roy Hobbs once he struck out The Whammer. He barely cracked the Top 20 in the 40, which does not move the needle in New England. But he was good-to-great in all the drills that do. His all-important 3-cone was third best at an even 7.00. His 20-yard shuttle was a second best 4.15. And despite weighing less than a typical Trent Brown breakfast, he benched 19 reps, good for 12th best among all RBs at the Lucas Oil Gym Class.

Plus, he'll run right through much bigger tacklers

Not only does Taylor have a very legitimate chance to carve his legend into the relatively small pantheon of undersized Patriots fan favorites, he has a shot to be among the all time best UDFAs in recent memory. Which is an established tradition around here. Adam Vinatieri. Wes Welker. Stephen Neal, who was a college wrestler but played 10 years of pro football. Malcolm Butler. David Patten. Joe Andruzzi. LeGarrette Blount. Current starters JC Jackson and David Andrews. Just to name a few.

You can't be a greater underdog than a 5-foot, 5-inch UDFA running back in a game of behemoths. And if he's like any of my 5'5" friends, he's going to bring an arrogance and an attitude that should serve him well. Little Man's Disease is a powerful tool to help a guy get through life. And I cannot wait to see JJ Taylor in action. Practices can't start soon enough.