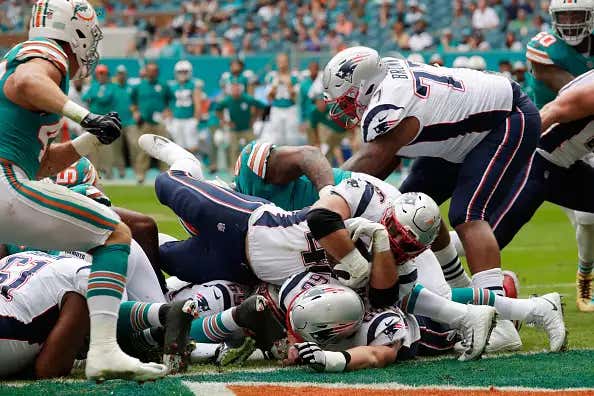 I didn't think it was possible, but the waking nightmare/bad acid trip that is 2020 somehow figured out a way to get worse.

This has been out there for some time. I makes sense, given that he missed all but two games last year with an injured neck and coming back for another season would put his health in jeopardy. After all, a roll will only protect you so much. And if you suffer a re-injury it's not like they can fit you for a prosthetic neck. (Though if they could, I'm sure he'd be willing.) And still, as Develin's retirement becomes official, I'm not ready for it.

His will be a tale I will be telling grandkids someday, though I'm sure they'll scarcely believe such a person existed. Part man, part battering ram. Not born of human parents, but rather forged by the King of Dwarves harnessing the power of a collapsed star to open up holes in a defense.

How effective was Jimmy Neckroll? In this case, the numbers tell the story. Here was the difference between last year without him and the previous year with him:

So, while there are other factors at work here, obviously, you can still say that roughly speaking, they were about a half a yard per play better with Develin than without him. And the effect on the team's lead running back was even more pronounced.

Those are not coincidences.

And yet, sadly, it is here where his journey comes to an end, all too soon. It has come to pass that the indestructible one has, at long last, proven capable of being destructed. He has succumbed to the fate that awaits us all, retirement. I will not even begin to discuss how or if he can be replaced. And while I'd like to say that we shouldn't cry because it's over, we should smile that it happened, I'd rather not. Instead I'll repeat Gandalf's wise words. "I will not say 'do not weep.' For not all tears are an evil."

Goodnight, Sweet Prince. Get well soon and be back in whatever capacity you can.