We know last night was the Dennis Rodman episode and man did it deliver. I still can't get over that Vegas story with Carmen Electra, but it got me thinking. What are the true memorable moments of Dennis Rodman that have absolutely nothing to do with rebounding or winning titles. That said I will still argue the craziest part of Dennis Rodman was the fact that he was on the Spurs. Now obviously these are tied to hoops, impossible not to be, but that doesn't sell in the headline. Let's get into it.

11. Getting drunk and robbing a yoga studio

I laugh every single time I hear that sentence. Dennis Rodman gave Post Malone a $25 gift card to Olive Garden as a Christmas gift. It's so outrageous that it's starting to become my favorite sentence ever. You know Post Malone loved the gift. You know Dennis Rodman thought he nailed it. It's all just perfect when we're talking about Dennis Rodman off the court shit.

Sure, it's not a great moment. But it also showed who Rodman was. He was a loose cannon. You never knew what the fuck he was going to do or not do. You knew he'd hustle his ass off and defend, but would he get suspended? Would he show up on time? Kicking a cameraman was so outrageous. I still remember the whole fallout of this and watching updates.

See everything I said above. Just sub out a cameraman and kicking for a headbutt on a ref.

7. Trying to wear 69 with the Mavericks

Rodman wearing 69 would be the most owned jersey of all time. No doubt about it. It's iconic. Any music festival? Any college party? There would be hundreds of them. I'm all for David Stern blocking Chris Paul to the Lakers, but this? This is the biggest one he needed to explain to us.

6. Madonna offered him $20 million to get her pregnant - so he leaves Vegas, fucks her and gets right back to his table

Just a little peak into Rodman and Vegas, I guess. Imagine him sitting there playing some blackjack or craps. He gets th call and knows he can't say no to Madonna. It's Madonna! But what if the table was hot here? You know you can't leave a heater. That's why he ahem knocks out what he has to do and then flies immediately back to Vegas. That's right she was in NYC. Just a little cross country road trip.

Just find any headline you want with the words Dennis Rodman and North Korea in it and fill it in here. Somehow this is only 5th on my list and it feels way too low. Maybe at this point I'm just immune to crazy Rodman shit, but the man became good friends with Kim Jong-Un and an ambassador. DENNIS. RODMAN. Shit, he organized a game there. We had him saying his mission was to break the ice with hostile countries. Actually kinda checks out though. Feel like Rodman would be a great ice breaker guy. 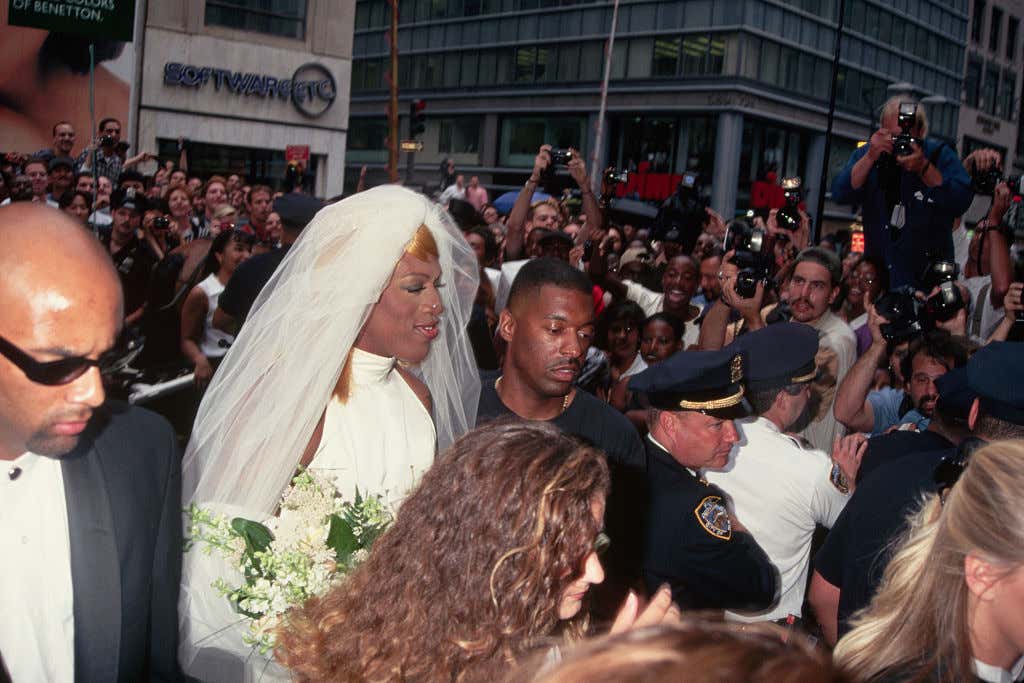 Not only was it the wedding dress, this is when he came out as bisexual and said he was marrying himself. This was also when talking about Rodman was HOT in the streets. Everyone across the country was talking Rodman and the crazy shit he pulled. Sure it was for a book tour, but the picture of him in a wedding dress is probably a top-3 image you think of with Rodman.

So this was the topic from last night's episode. Dennis Rodman just straight up said he needed to go to Vegas for 48 hours. MJ may or may not have had to go out there and bring him back where Carmen Electra may or may not have been in Rodman's bed. Imagine today a star saying he needs to leave his team for a few days to go to Vegas and the true star of the team and face of the league has to go out there to get him. I'm picturing like Klay getting lost out there looking at scaffolding until Steph would save him. It'd be talked about for no less than 72 hours straight. Twitter would be unreal with it. Oh, also, Carmen Electra.

How the hell did we get Karl Malone and Dennis Rodman - at the peak of Bulls/Jazz - doing a goddamn tag team match? This is something that deserves an entire story on its own. Don't get me wrong as a wrestling fan and hoops lover I LOVED this. But it's still insane that this actually happened.