I'll be frank with you guys. If I barely know anything about the players drafted during the first two days of the draft, I'm definitely going to have no fucking clue what I'm talking during the third day of the draft. All I usually do is look at the Strengths column of a player and imagine all of the best case scenarios occurring because negativity is not what we need on Day 3.

But since all we have is time during this quarantine, here are my quick hits on all of the Giants Day 3 picks.

I'm sure some Giants fans were upset because Dave Gettleman has acquired roughly 100 DBs during his tenure as Giants general manager. But according to some of my sources deep within league circles, the NFL is a passing league. By that logic, having people that can defend the pass is very important. Especially if your pass rush has been various states of non-existent the last few years and is still a major question mark right this minute.

However, Darnay Holmes is fast as fuck and can return kicks to the house.

That video is music to Giants fans eyes since we are all still scarred from the Dwayne Harris Era where kick returns were usually 3 yards and a cloud of dust. I love having my Madden return guy not only with all the important speed ratings at 90+ but also has a good Kick Return rating, even though I have no clue what the hell that means other than maybe the computer giving him a boost. I will go to my grave believing that Corey Coleman was going to be the NFC Return Specialist Pro Bowler last year before an ACL injury ended his season before it began. Coleman could still be a return ace, but I like having insurance with Holmes.

My only red flag on Darnay is this tidbit:

Ruining your summer with college classes so you can graduate from being a football player at UCLA early is one of the craziest things I've ever heard. Then again, Darnay Holmes is already smarter than me and is about to be richer than me. So I guess maybe it's the father of two that pays his bills as a professional smut blogger that's crazy here.

A Hog Molly with a great name, sick flow, and plenty of ink.

Name something you dislike about Shane Lemieux. You can't. It sounds like there's a chance the Giants may try to move Lemieux to center down the road since while also keeping him as guard depth, and Lemieux's Instagram only confirms this theory.

Hopefully the Giants practice my Madden strategy of sorting offensive lineman by Overall rating and playing the best 5 guys regardless of their natural position.

I imagine every sports fan with a pulse briefly thought about Mario Lemieux, so here is a pretty awesome highlight video I found of him with a sweet ass soundtrack.

Linebacker U, ever heard of it? I was sold on Cam Brown simply based on his choice of college and position. Then this tweet started getting retweeted and I fell in love.

Did you know that Carter Coughlin's grandpa is Tom Coughlin? Not the Giants Tom Coughlin but likely a wonderful man in his own right. Remember when the Giants released that video of Coughlin addressing the team before Super Bowl XLII? That was awesome (*Said in Chris Farley show voice*).

Even though they Carter isn't related to our Tom Coughlin, I still love having a Coughlin on the team, with CJ making the perfect analogy.

Bonus points for being a double last name Coughlin and being an edge rusher whose best attribute is speed. I can talk myself into any player that has speed.

I was pretty meh on the pick just because I don't know anything about Brunson. Then I saw the Gamecocks tweet for when he got drafted.

6 is a fast number for a college linebacker but an uglyyyyyy game card and no way to introduce yourself to the NFL. However, all is forgiven if Brunson wears the classic SC hat that every punk ass kid had in the 90s during his first virtual press conference with the media. 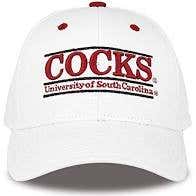 CFF Grade: B- (Changes to B+ if TJ wears that hat)

I love drafting two guys from a program on the come-up like Minnesota. Is that an indicator of future success? I don't know. But Williamson being a transfer from Florida raises this pick up a full letter grade in my mind. If Last Chance U has taught me anything, its always take a chance on kids that used to go to SEC schools.

Mr. Irrelevant which actually makes Tae Crowder the most relevant player in the entire 7th round. If you had told me before the draft that the Giants picked a linebacker named Tae Crowder from Georgia, I would be over the moon excited and figured he was a Top 100 pick at worst.

Okay, that was a whole lot of work for what I imagine won't be a whole lot of pageviews. But I've been more excited about the Giants since Joe Judge's introductory press conference than I have been since Ben McAdoo's haircut and love of showing the team weird ass hype videos gave me unlimited content as a blogger. I will leave you guys now with two more notes before I go back and read every Draft Grade I can get my hands on.

Did the Giants just sign the next Ramses Barden ipso facto the next Plaxico Burress that will be an auto touchdown every time the Giants throw a fade to him in the endzone?

*To be clear, I am not counting out this being the year Ramses puts it all together and becomes the red zone force we all thought he would become

Hog Mollies. Linebackers. Pass Defense. New York Giants Football. Before the draft started, I said I wanted to draft nothing but offensive linemen and defense unless there was a good wide receiver available since Sterling Shepard's brain health scares the shit out of me. But I cannot put into words just how excited I am for this season to kick off, whatever year that may be.