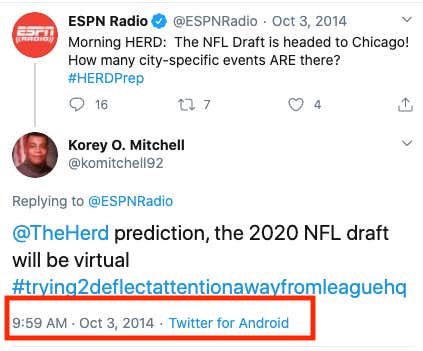 What, and I cannot stress this next part enough, the fuck is this about Korey O? I know once Twitter hit a zillion users and everyone tweeted nonsense day in and day out, sooner or later people were going to be mistakenly predicting the future and putting the Old Takes Exposed dude's brain in a blender.

But some rando nailing the 2020 NFL Draft being virtual was a little too crazy for my brain to handle after 6 weeks in quarantine. Especially when that guy's name is Korey with a K. That's definitely the name of someone from a dystopian future after coronavirus, the drinking bleach fad, and whatever post-pandemic economic fallout wiped out a changed humanity and the world forever. Do you notice how Korey O. never says why there is a virtual draft? Because time travelers know they cannot reveal too much or it violates some sort of time traveling rule or paradox. Korey O was clearly sent to the past for some other reason, likely to right the wrongs that occur in this timeline. But he also had to flex on Twitter like we all do when we are the first to find out news. He just put it on the record 6 years early like Nostradamus knowing we would be stuck in our houses watching the draft when he melted our brains with the least cold take ever.

Also, #NeverForget when people thought that the world might end when Game 7 of the 2016 World Series got delayed in extra innings. I didn't sleep a wink that night because of the heart attack fucking Rays Fan Gio gave me. 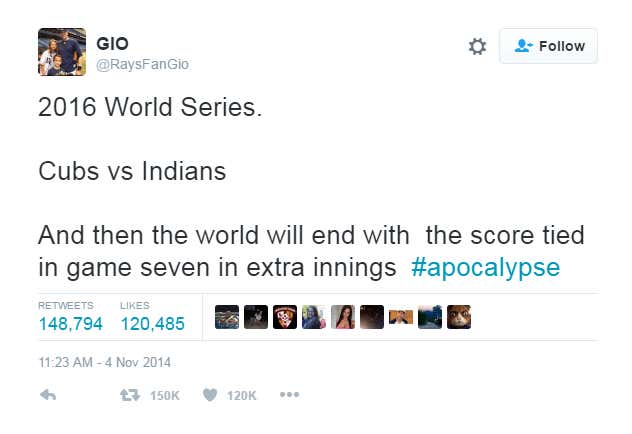