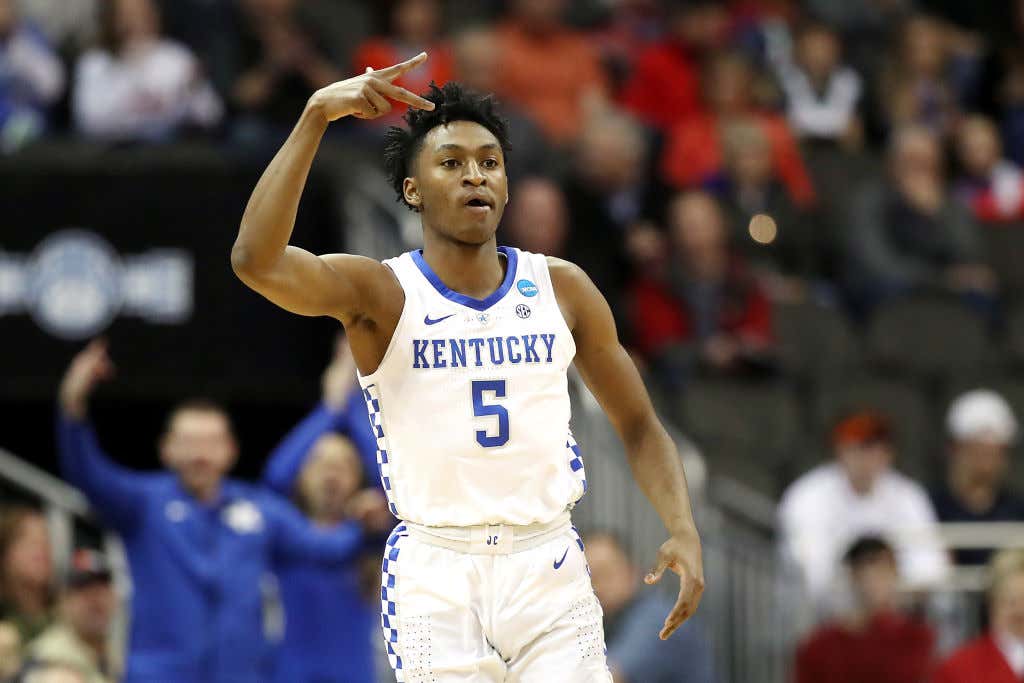 Alright it's that time again to dive into the YouTube highlights of a potential Celtics prospect and we have some shooting on the menu tonight. Lord knows this team needs all the shooting help it can get so I'm excited about this one. As a reminder you can catch up on all previous prospects we've looked at by going here. I don't know about you but watching the NFL Draft last night made me crave the NBA's virtual draft, so it's only right we have this blog today.

So who are we looking at?

That's right, it's time to fall in love once again with another Kentucky guard and honestly I cannot wait to dive in. We begin with the stats:

OK so here's the thing. My brain just assumes that if you go to Kentucky, you're going to be an awesome pro. Look around at some of the best players currently in the league and they went to Kentucky. I'm sure there are some misses in there over the years, but overall I feel like if Coach Cal wants you and brings you in, you'll be a good pro. Then I think of the Celtics history drafting guys from Kentucky and there are obviously two ends of the spectrum. There's the Rajon Rondo/Antoine Walker/Ron Mercer side and then there's the James Young side. Some worked out, the other….well we don't have to talk about that. Where does Immanuel Quickley end up? Well, after learning about this

we're off to a great start. As I've stated in this blog before, your name plays a HUGE role in how badly I want you added to this roster. Adding a dude whose name means Godspeed? That might be enough for me right off the bat. If we then go to the mock draft test, the most recent one I saw has him going around 33, so he does fit our rule of being a player that has to be around where the Celts draft. Maybe they snag him with the 30th pick if they go big man at 26. The kid was the SEC Player Of The Year and if you look at Ainge's immediate draft history, that's something he likes. See Grant Williams so keep that in mind.

My first takeaway watching those highlights is I love his size. Seems big enough so he can guard multiple positions which is basically what gives Brad a hard on. Looking at the Celts current roster, they are undersized all over the place at the guard position so adding another 6'3 PG/SG is fine by me. I dunno about you but I loved all those highlights of him scoring through contact whether it was on drives or even with little pullups. Love his release on his jumper and his form looks pretty good to me. This is a guy that shot 42.8% from three last season on nearly 5 attempts a game, he shot 92% from the line and was a career 89% FT shooter in college. He seems to check all the boxes that people use to project NBA 3pt shooting. Just 1.6 TOs in his 33 minutes a night too with a 23.4% usage rate so it's hard to not love that as well. I also can't ignore how money he appears to be with his floater, a shot that's pretty important for a Celtics guard to have based on how Brad's offense works.

Now what I didn't really see was his playmaking ability, he's a guy that averaged only 1.9 assists in college but it's pretty clear that wasn't his role and wouldn't be his role if he found his way onto this roster. I'm taking him for his shooting/scoring and hoping Brad can develop that part of his game over time just like he has with Jaylen/Tatum. If you're telling me you can insert a guy who is NBA ready as a shooter and can hold his own on defense, that's exactly what I want for the second unit. He also got to the line a ton with a 47.1% FTAr which is a BIG TIME need on this team.

When you add it all up, this is the exact type of prospect I'd have no problem using the last pick in the first round on. Maybe you're reaching a little bit, but the plus side is worth it to me. It's a crap shoot that late in the draft anyways so give me the elite shooter with good size.

Conclusion: IN on Quickley as long as he promises me he will not be James Young 2.0