BOOOOOOOOOOOOOOO!!!!!!!!!! Was that the basement of a Barstool blogger during a Quarantine Edition of Cribs or the basement of a commissioner of the biggest sports league in the country that has a $44 million salary and is worth $150 million according to the always accurate CelebrityNetworth.com? I got all excited going down that fancy set curved staircase only to see the most basic basement on the planet. Stu Hart's famed Dungeon that trained countless WWF wrestler back in the day had more charm and lighting than Goodell's "man cave" (Hearing Goodell say that drove a shiver down my spine).

I can tell you everything you need to know about a person based on two minutes in their basement and Roger Goodell is no different. 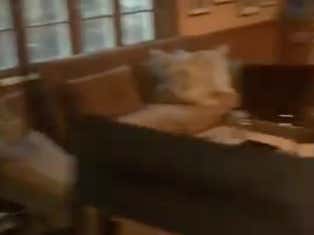 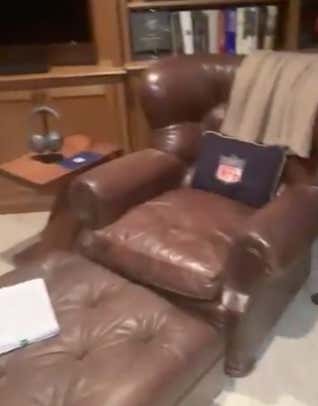 That right there is the setup of a man that doesn't have any friends, because nobody would subject pals to a couch that gave me a backache just looking at it. I'm sure there was a time when Goodell would host a poker game or two before his neighbors realized he's the worst.

I was shocked Goodell has multiple TVs, which is a veteran move and I would never dare shit talk his 30 year old leather couch because that's a wonderful piece of furniture that you can sink into on NFL Sundays while watching RedZone and two other games until your eyes bleed along with being able to fart as much as you want knowing that couch will suck them all in. But you know that's also probably where Goodell sits and hides after he bungles the response to whatever the latest NFL PR crisis is.

The pictures on the wall of Rog shaking hands and exchanging pleasantries screams egotistic Hardo while the lightly used fireplace screams someone that has no clue how to start or maintain a fire. But anybody reading Barstool already knew that about him. The apparent lack of a dehumidifier tells me that Rog is barely a basement guy and much more a living room or dining room guy, which makes perfect sense given everything we know about that fancy asshole (There is also a chance Goodell has some expensive dehumidifier instead of a floor unit like I have that sounds like a truck is running in my basement all day. But lets just stick with Goodell being a non-basement schmuck).

Basement Rating: 6.5/10. The multiple TV setup and that goddamn chair from football heaven that you become one with is the only thing stopping the Goodell Dungeon from getting a failing grade.