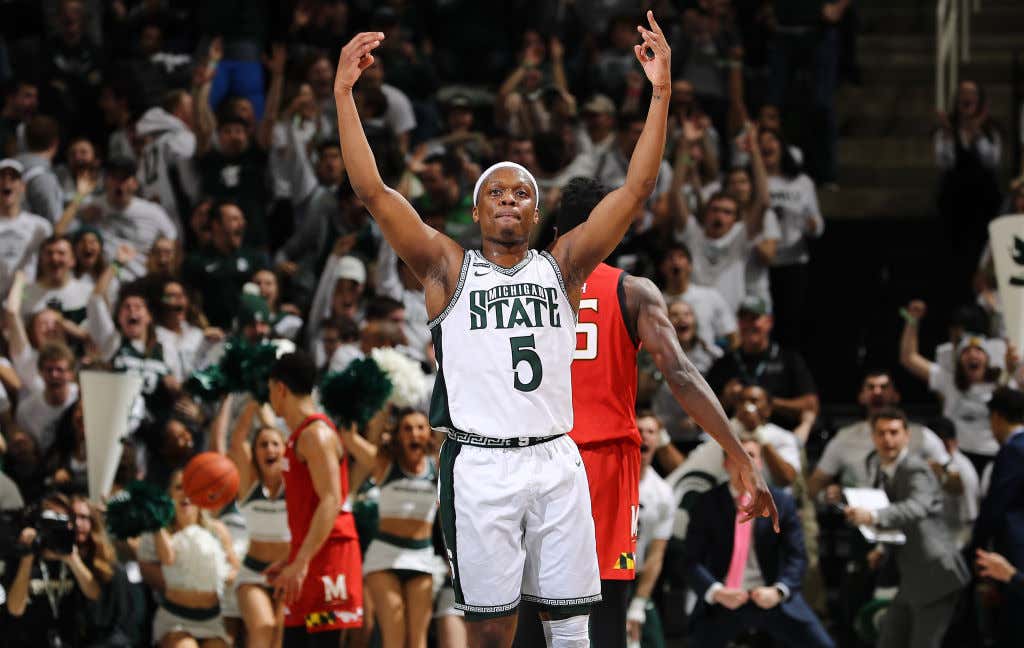 The time has come for our next dive into the YouTube highlights of a potential Celtics draft pick and today we're talking point guards. As always you can go and see every prospect we've done by going here. A good list of guys if you're looking for something to kill the time with. A nice mix of guards and wings so far but I wanted to talk guards today because really all we've done so far is Nico Mannion.

So who is today's prospect?

Not a huge MSU fan? That's A OK. We'll learn about this fella together. As always, we'll start with the stats

You know what I don't want to hear? The Celtics shouldn't be drafting a point guard. When it comes to this time of year, you need to be honest about this roster. Here are the stone cold facts whether you want to accept them or not. If you look at the guard production from the bench this season, the Celtics rank 28th in points, 22nd in FG%, 30th in 3PM, and 23rd in 3P%. Yes, I am fully aware that both Carsen Edwards and Tremont Waters exist and are on this team. I'm also aware of this

Obviously Tremont's sample size is super small, but the point is nothing we saw from either guy should give you the impression that Ainge should stay away from point guards in this draft. You also have to factor in Brad Wanamaker's free agency status this summer and the fact that he'll be 31 next year. Chances are he's not back. So even if one of Tremont/Carsen takes his minutes, there is still room on this roster for guard help.

Now, most mocks have Cassius Winston dropping to the Celts at their 46th pick. One could argue that if the Celts are actually making this pick it's a bit of a disaster because you would think Ainge would package a few of his picks to either move up or trade for a later draft. While it may hurt Winston's stock that he's already 22, it doesn't really bother me if we're talking about a late second round backup point guard. I welcome the maturity of a four year player. Here's what I know based on watching those videos and looking at his numbers. This dude can shoot. A career 43% shooter from deep, he shot 38% as as freshman (under 1 3PA), then 49% as a sophomore (3.7 3PA), then 39% as a junior (5.4 3PA) and 43% last year (5.6 3PA). He's also a career 84% shooter from the line, so all signs point to his three point shooting translating at the next level. I don't think it's crazy to say the second unit could use some shooting from that spot.

I don't exactly get the impression that he's the quickest or most athletic guard, so there is a little concern about him being able to get by NBA caliber defenders, but I'm willing to overlook that given his size and strength. It really seems like despite not being quicker than guys he's still able to get to his spots through sheer strength. I also love how he sees the floor and the way he passes the ball. That looks like a guy who isn't afraid to thread the needle if needed. He had three straight seasons with at least a 43% AST%, and I'm intrigued by how he passes off the dribble. Nothing I see in those highlights tells me he can't be a reliable offensive back up point guard as well as an off ball shooter, which fills a glaring need.

Where the quickness issue could bite him is on the defensive end, but name a time a point guard being a negative on defense has stopped Danny Ainge before. Remember, the Celts are already a top 5 defense in the NBA. I'm willing to sacrifice that end of the floor for improved shooting/reliable back up point guard play and you should be too.

Conclusion: IN on Cassius Winston if for some reason the Celts still have their 46th pick and he's there. Bring me shooting, let him get his reps in the G-League and make spot appearances here and there. I see no downside.