Can #ComebackSZN have a #ComebackSZN? Because I feel like Gronk, along the quarantine making people sick of being around their families, has officially brought #back #ComebackSZN.

Not to go all Steven Cheah on you guys, but I've picked up a thing or two about scouting since the NFL made Game Pass free to everyone during this quarantine. And the tape on 2020 Percy Harvin don't lie. Still an insanely quick first step, acceleration is still elite, but steps 4 through 20 are extremely slow. Like painfully, my fat ass could almost beat Percy in a foot race up that ramp slow. I'm no trainer. In fact, I am pretty much the legitimate polar opposite of a trainer since I've been locked in my house the last month. But I think showing Percy jumping on boxes, running in water, or pretty much doing anything BUT running in slow motion up a concrete ramp would've helped get him a phone call from an NFL GM. (*Unless the NFL is going to start playing games in parking garages because coronavirus is found to live longer on grass).

Actually now that I think about it, all Percy Harvin has to do is put out a video of him getting tackled and being able to get back up. If you see a specimen like Percy finally will be able to get on, and more importantly stay on a football field, it should get the blood rushing to all the right places for scouts.

Percy also has to put out a video of him running faster than a 27.7 40 because it feels like he is hiding something.

P.S. I remember Percy Harvin's stats being much more impressive despite missing so many games, likely because he put the fear of God into me every time he touched the ball after murdering me in fantasy twice during the 2011 season. 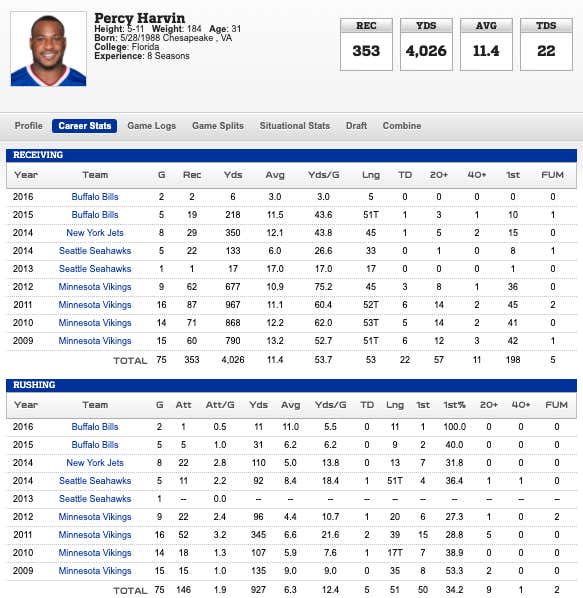