On today's Hard Factor News, it's WTF Wednesday and our hosts got into some of the best listener-submitted news stories from this past week.

One submission brought us to Ogden, Utah, where 46-year-old Frank Hinojosa Rendon, a one-legged member of Scoots & Shoots, a disabled motorized wheelchair gang, tried to blow his up his neighbor last Friday ... and Saturday. 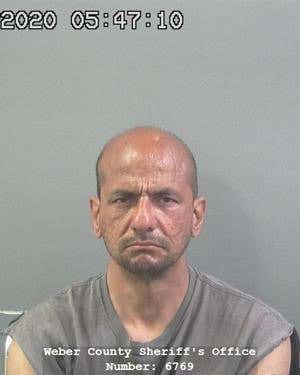 As reported by the Standard-Examiner, Rendon said that he heard a woman's scream coming from inside the home before he began threatening to blow the man up.  Knowing it was just ole one-leg Frank because he had done this before, the homeowner called police who came and took Rendon to the hospital for evaluations.

And that's where mistake number 1 was made.

You see, with frantic and violent psychiatric patients, the smart thing to do would be to make sure they are restrained in some way for the safety of themselves and others.  But, for this hospital in Ogden, Utah, that wasn't exactly the precautions taken.  Free to roam around, Rendon devised a possible escape plan which started with him throwing his piss all over security guards.  Unable to get away, Rendon began yelling something like, "Enjoy that Hep C boys!" followed by a maniacal laugh, and unfortunately for those guards, Rendon's records show that he is, in fact, positive for Hepatitis C.   Yikes.  Might want to burn those uniforms, fellas.

Additional charges of knowingly propelling infected bodily fluids were tacked on to his already pending charges.

After formally being charged, Rendon was RELEASED back to the hospital, as his charges were mere misdemeanors and Rendon is ineligible for incarceration due to the fact that he is on kidney dialysis.

Once released from the hospital's care Rendon was back to his menacing ways.  The next day police were called to the same residence, this time by firefighters, who were attempting to put out a fire in a truck bed when they discovered a pipe bomb inside.  The fire was eventually put out and the device was unsuccessful.

Witnesses said they saw a one-legged man on a scooter drop something in the bed of the truck and then frantically scoot away.

*This is a reenactment done by a paid actor*

Rendon was FINALLY booked into jail after this one, racking up several misdemeanors and a felony use of explosives charge, all in less than 24 hours.

Get the full story covered on today's episode below and hear more like it Monday - Friday, on Hard Factor News. Your daily dose of News Cocaine.  *Also a bonus "Convict Corner" story submitted by loyal listener and hero, The Dutch Hammer, in the video below*