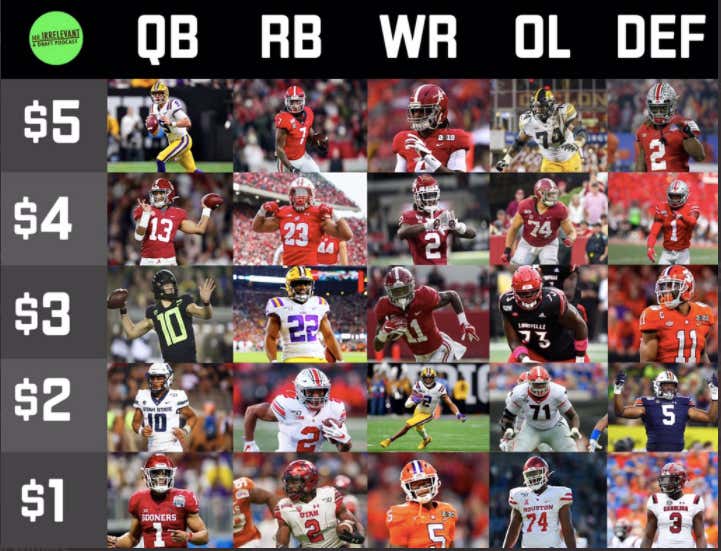 I am not, I repeat NOT addicted to picking things for $15. I can stop whenever I want to stop.

Having said that, this fictional $15 is burning a hole in my pocket so let's get to it

I think there are two elite quarterbacks in this class so I'll take the cheaper one. I'm generally pretty optimistic on the recovery of athletes now across sports. We know too much and the medical world has advanced so much since Tua suffered a hip injury similar to the one that cut Bo Jackson's career short. I'm betting on the guy that was a terrible tackle away from probably still going #1 overall.

Dobbins for $2?? $2 too much but I'll take it. I like Swift the most of the guys here and think he probably ends up as the best pro. But I like Dobbins second among this bunch. Is Swift going to be 2.5 times as valuable as Dobbins? Because he costs 2.5 times as much. Give me the guy that rushed for 2k yards on nearly 7 yards a pop and was absolutely shredding Clemson (24 touches for 221 total yards & 1 TD, 9.6 yards per play) before he got injured in his last college game.

Legit 4.2 speed that shows up on tape (18 yards per catch over his CAREER at Alabama) for a major program? Yes, please! Jeudy and Lamb are better route runners, but there are few people on the planet with Ruggs' speed. There are even fewer that can keep up with him defensively. He's going to take the top off of my defense, Tyreek Hill style. A nice way for the Football Gods to make it up to us for this awful 2020 year we've had so far? Let the rumor below be true:

Another steal! We all know college performance doesn't guarantee NFL success but none of the guys above Thomas here were named Unanimous All-Americans…but Thomas was. Willis made Second Team All-American…but was behind Thomas who made First Team All-American.

You know the Unanimous All-Americans list from above? Okudah was there too.

I like the physicality. I like him coming from a big program. The physical traits match the tape. He worked hand-in-hand with the man above him on the chart but Okudah did his part on the backend.