Like the rest of us, the 42-year-old former Patriots quarterback has had trouble finding a place to work out. Brady was spotted at a city park and told to leave by a Tampa Parks and Recreation staffer, according to Tampa Mayor Jane Castor. The city’s parks are closed in an effort to stop the spread of COVID-19.

“I got to tell you this story, too. I always tell people, ‘Now I’m not one to gossip so you didn’t hear this from me,'” Castor said during a Facebook live chat with St. Petersburg Mayor Rick Kriseman on Monday.

Enough of this. Life doesn't need any help sucking a hot air balloon-sized bag of dicks right now. It's plenty bad enough when I'm spending what should be Patriots Day in Massachusetts flipping between the 2003 AFC championship game and the 1989 draft without hearing Tom Brady is getting booted out of public parks for working hard preparing himself for the 2020 season. Or 2021, if that's what it comes to.

He wasn't supposed to go to Tampa to go all Act Two of "Rocky IV" on us. Working his ass off out in the elements while the authorities keep an eye on him. He was supposed to go down there to be Act One of "Rocky III." All relaxing. Resting on his laurels. Enjoying his success with credit car ads and appearances on "The Muppet Show" and going to bed every night on a pile of Buccaneers cash.

I want him down there for the same reason anyone else from New England goes there: To semi-retire. Just be happy that Bruce Arians just wants you to have fun and be his pal and watch him drink a beer while you have a kale smoothie. I want him to treat his offseason program like he treated OTAs the last couple of years. As optional, and therefore to be missed. Stay at home. Help Gisele hang pictures and move furniture. And for the love of all that is sacred, don't get all obsessed with improving and winning and all that.

The ball is in your court, Jarrett Stidham. Get your massive meat javelin out to Boston Common and get working. I'll even promise to bail you out. 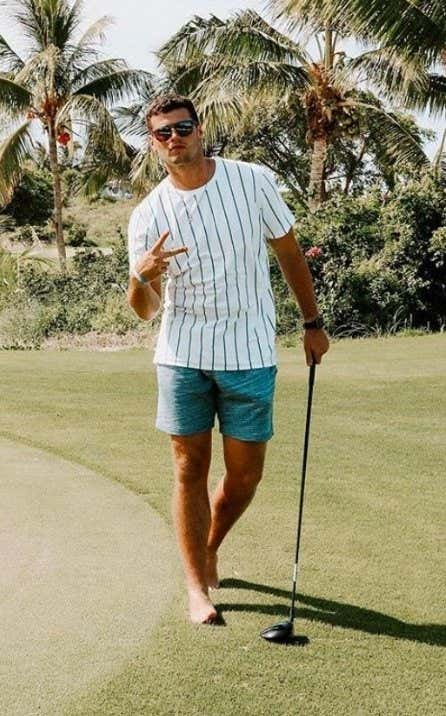