Celebrities have been all over the place with COVID-19 advice and suggestions. So naturally, when AJ Hawk had Aaron Rodgers as a guest on his podcast this week, The Hawk Cast, he had to get his two cents on the matter. And Rodgers did not disappoint. (Unless you were looking for Kelly Ripa-type meltdown from him, in which case you probably don't know who he is in the first place.)

"One thing that I haven't done or will not do is (be) one of those celebs who's telling you how difficult it is, or stay-in-your-home stuff, from a mansion.

What I do know is that my friends who are small-business owners are really hurting... There's real people hurting, so I'm not going sit here in my privilege and tell people from my ivory tower to do this or do that...

I will say, let’s all be smart about what we’re doing and what we’re seeing. But man, I know people are hurting and that is way more important to me than some sort of message that I can relate to you. That to me just falls on deaf ears.”

Just when you think you can't love your QB more than you already do, he turns around and drops the most self-aware, empathetic, and understanding message possible. Not only does he bypass the standard advice, he immediately turns the conversation to those who are really suffering, people whose livelihoods are significantly damaged because of the virus. His ability to put things into perspective and recognize the privilege of being stuck in a mansion - healthy and comparatively unaffected - is pretty enlightened.

In the end, the only message he has is that of mindfulness.

It's definitely much easier said than done, but positivity is contagious. And so is negativity.

So shoutout to the gratitude from the ivory tower!

(P.S. That wasn't the only Corona-related conversation…

Hawk: "During these times, you're quarantined away in your place in California, is this a time where you can just take all the steroids and you don't have to fear the testers coming to find you?" 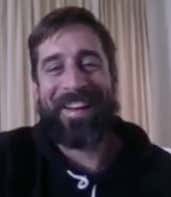 Honestly, I'm not sure I've ever heard him chuckle like that before! That's the hard-hitting journalism I'm here for: serious Corona talk coupled with tough questions we all want answers to. Well done, AJ!)