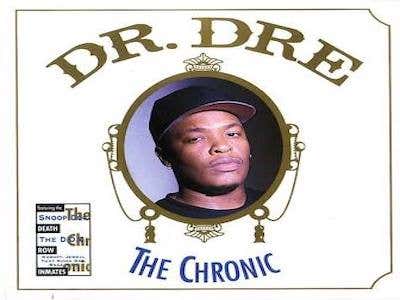 Today, streaming services have marked 4/20 by making it accessible on their platforms for the first time – with the likes of Spotify, Apple Music and Tidal all hosting it.

*Sorry if this headline offends anyone. Drugs are no laughing matter!

Did Dr. Dre do it again or did Dr. Dre do it again? At what point is Dr. Dre going to be considered the greatest marketing mind on the planet? First he got millions of white kids to buy gangster rap albums about the happenings of the streets of South Central LA using some of the greatest beats in hip hop history followed by an iconic white rapper. Then he got zillions of people to buy headphones by putting them on every celebrity with a pair of ears. And now he launches his classic debut album named after some good ass weed on essentially Worldwide Weed Day. Eat your heart out, Don Draper.

One of the proudest random facts of my life is that my first CD was "The Chronic". Shout out to my parents for not only letting me buy an album full of tracks with titles like Fuck With Dre Day, Bitches Ain't Shit, and Deeeez Nuuuts (which probably help turn me into the smut blogger I am today) but for also not busting my balls for being an oblivious nerd that had no idea why a leaf was on the CD, which was so simple and understated yet so beautiful.

Little did I know that I was about to meet legends like Snoop, Nate Dogg, and Daz on that album along with finding out who Suge Knight was along with one of the most brutal diss tracks/videos ever when you consider when it was made.

The Fuck Wit Dre Day music video walked so Hit'em Up could run and Here Kitty Kitty could fly.

It also has to be said that the skits on The Chronic were actually legitimately funny that brought something to the record, which is a straight listen through until this day. The fact Deeez Nuuuts was a skit on this album yet is still in our lexicon tells you all you need to know about how great The Chronic is in addition to all the bangers and other classics it spawned.

Speaking of those classics, here is a refresh of my personal rankings for Top 5 Dre produced albums (at least the ones where he produced the majority of the songs):

Honorable Mentions (Seriously, how the hell can albums this good not be in the Top 5?!?!?!)- Straight Outta Compton (N.W.A.), The Slim Shady LP (Eminem), The Documentary (The Game)

5. Get Rich Or Die Tryin' (50 Cent)- This is probably my favorite non Jay-Z hip hop album of this century, yet it only makes number 5. This made 50 Cent the biggest name in music, and more importantly, allowed 50 to become famous enough that he could challenge Floyd Mayweather to read a Harry Potter Book. "In Da Club" has to be the biggest hip hop song of the 2000s, right? The only song that touches it in my eyes is "Yeah" by Usher.

4.The Chronic (Dr. Dre)- For all the reasons I mentioned in this blog. Putting this at number 4 just seems wrong, but I guess that's where it ends up.

3. Marshall Mathers LP (Eminem)- I have moved this between 2 and 3 a billion times because it is impossible to decide where it should go. I put it at 3 because I think there are a ton of songs that are in the 7.5-8.5 out of 10 range, but just not enough 9s and 10s. "The Real Slim Shady" drives me up the wall every time it comes on. I realize he had to make it so they had a poppy, mainstream single to lead the album off. But it's still annoying to this day. Listening to this album makes me so goddamn angry about what Eminem's music became after The Eminem Show.

1. 2001 (Dr. Dre)- Maybe it's because I was in a fun part of my life when this album came out or maybe it's because I was one of the first people to have a CD burner in my school and I sold burnt CDs back in 99 (I was about that bad boy life). But this is just a banger the whole way through. It had the old Death Row superstars (Snoop, Nate Dogg, Kurupt, etc.) mixed with the new Dre superstars (Eminem, Xzibit, etc.) like if Hulk Hogan, Macho Man, and Andre The Giant were around in their relative primes to join Stone Cold, The Rock, and Triple H. Any number of these songs can still dominate the party. Simply fucking awesome.