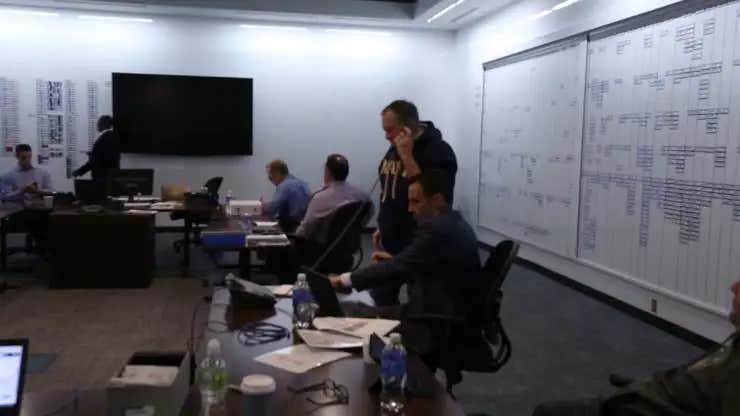 NFL Draft Week is finally upon us, to provide some small sense of normalcy to an otherwise barren, salted field where no other sports will grow. Granted, it won't be the same without a million Las Vegas tourists showing up to take in the pure excitement that can only come from watching 22-year-olds get their names called, pull an ill-fitting hat onto their heads and then physically engage with the world's most awkward middle aged man. But the first - and praise God, last - Zoom Draft will have to do.

And since the draft is just days away, it's time for my favorite time waster this time of year. Hearing from people who say Bill Belichick is a terrible drafter. Like the birds coming back to the Northeast, you can set the calendar on all your clocks to it. Someone will just appear outside your window one morning, whistling a song about how GM Bill is always letting down HC Bill. Even as you shoot them off their perch with birdshot of all the double digit win seasons, deep post season runs and banners, they always come back to the same branch and start in again.

Today, it's someone from an alleged Patriots blog.

I don't even need to excerpt the claims made in here because we've read it all before. We know how the game is played. You count up the misses, diminish the hits, and chalk up the tape measure grand slams as pure, stupid luck. But just to play the game, here's a sample:

How about 2005? Again, just “meh.” Logan Mankins went 32nd and was obviously impactful, but Ellis Hobbs? Nick Kaczur? James Sanders? Waste, waste, and waste. Ryan Claridge (LB) went in the fifth round and never became anything while Andy Stokes (TE) was another pick down the toilet at 255. The only other player that became anything somewhat relevant was Matt Cassell at 230 overall. Chalk 2005 up as one of the worst ever in the Belichick era.

Holy smokes. I want to go easy here because punching up is way more fun than punching down. But really? Logan Mankins was "impactful"? Yeah, I guess you could say that if you're definition of impactful is "became the second best interior lineman in team history as well as the highest paid at his position ever. So yes, he's "impactful" in that way Barack Obama was an "impactful" candidate in the 2008 Democratic primary. Ellis Hobbs was a four year player and started every game in back to back years, including one that went 16-0 and went to a Super Bowl. James Sanders was the starting free safety those same two seasons and played 114 NFL games. Nick Kaczur was their right tackle and started for five seasons. They were all taken between Pick 84 and 133. But fuck them for not being first ballot Hall of Famers. Matt Cassel's  relevance was more than "somewhat" when he led them to 11 wins and returned an early second rounder in a trade.

But that's how the "GM Bill Sucks" game is played. Count the losses, ignore the gains. It's like the way the Mob keeps the books on their legitimate businesses.

I do it a slightly different way. Rather than compare GM Bill to some idealized form of Platonic perfection, I compare him to all the other GMs. Since they're all gladiators fighting in the same arena and he's been up to his sandal straps in puddles of their blood for two decades, I think that's fair. And by measuring him against his contemporaries, not only to you get the Won-Loss record and the rings, you get this result:

But if it's in depth analytics you need to really make the case, I refer you to this long piece that Pro Football Focus (paywall) did last month. I don't want to get too deep into the weeds or "borrow" the charts that the elves in Cris Collinsworth's nerdshop did, because it wouldn't be right. But a few bullet points they laid out:

--Despite drafting late in every round every year and having picks taken away by the league on a few occasions, GM Bill has traded his way to the 13th most draft capital in the league.

Between 2005 and 2015 … the New England Patriots, who won the most games during that timeframe by a fairly wide margin (147 to the Colts' 127) yet still found themselves in the upper half in terms of draft capital.

The Patriots also had to forfeit their 2016 first-round pick due to the fallout from Deflategate, but if we hypothetically had them draft with the 29th overall pick that year, they would have had the eighth-most draft capital in the league despite starting with the lowest draft capital thanks to their sustained excellence on the field. That was a remarkable effort of maneuvering through both the draft and the trade market, and they gained a competitive edge over other teams in the process.

-- The Patriots have had the sixth most "draft success," defined as the difference between "expected WAR the draft picks were supposed to yield" and the "actual WAR those picked produced on the field."

From 2006-16, only the Saints, Seahawks, Broncos, Packers and Vikings had a higher draft success metric. It's worth noting that among them, they've won four Super Bowls in that time, to the Patriots three.

We’ve indeed found that consistently hitting on very good players is more important than consistently avoiding busts. This is an intuitive result, as it basically reflects that the upside of a draft pick is much higher than the risk.

Ranking teams by the "consistency" of their successes vs. failures by percentile, the Pats are ninth best. When the results are weighted by the more important early rounds and they're eight best.

But again, I don't want to get too deep into the calculus of it. Just to remind the people who write the dreck of this lazy narrative every year what frauds they are. And remind the rest of you that every time they bring up Chad Jackson or Ras-I Dowling or whomever, that they're selectively ignoring Devin McCourty, Dont'a Hightower, Duron Harmon, Marcus Cannon, Joe Thuney, Shaq Mason, Julian Edelman, Mathew Slater, Stephen Gostkowski, Chandler Jones, Jimmy Garoppolo, Vince Wilfork, Gronk, Mankins and two Pro Bowl teams worth of picks who went big money deals from other teams or retirement. Not the least of whom is the starting quarterback of the Buccaneers.

My guess is that HC Bill wouldn't want anyone delivering his groceries other than GM Bill.