Disclaimer: This isn't a video

As seen on ANUS Teaser 5, Nick and I unsuccessfully attempted to do a virtual trivia game show that was quickly derailed due to the poor internet connection and laggy responses on my end. Apparently my delayed answers also awkwardly (and problematically) applied to each of the previous questions (not sure how that’s possible), so we received a lot of backlash on the internet from prominent members of “cancel culture” and the like. 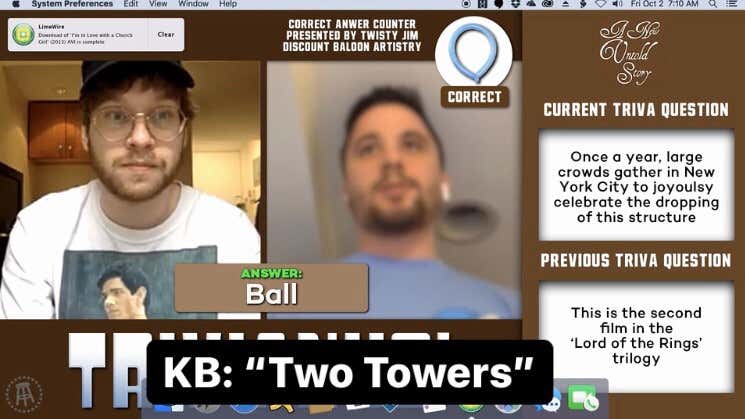 Unfortunately, that episode didn’t go as planned, but I’m going to try to redeem myself by providing everyone with the rest of the trivia questions that didn't end up making the cut...just in case anyone at home was curious and/or wanted to play along and have some fun. But first, here are the questions/answers that did up getting aired:

QUESTION: Which 2015 single from Taylor Swift and Kendrick Lamar trended on Twitter and reached number one on the Billboard charts?

QUESTION: What is the second film in the Lord of the Rings trilogy?

QUESTION: Once a year, large crowds gather in New York City to joyously celebrate the dropping of which large structure?

Answers: The Two Towers, A ball

QUESTION: In the Summer of 2007, which athlete made a name for himself when he took down 66 dogs?

And here are the rest of the trivia questions/answers:

QUESTION: Following "Time to Pretend" and "Electric Feel," which song was the third and final single from MGMT’s debut album Oracular Spectacular?

QUESTION: In 1983, pop sensation Michael Jackson spent a dominant 37 consecutive weeks on top of what?

QUESTION: What are the names of the male decathletes who earned medals at the 1976 Olympic Games?

QUESTION: What do former track and field Olympians Caitlyn Jenner and Oscar Pistorious have in common?

QUESTION: In a massively popular Vine video, a sexually frustrated skateboarder exclaims (blank) before smashing his phone on the ground?

QUESTION: Million Dollar Baby and Rocky are the only two boxing movies to win which award at the Oscars?

QUESTION: Floyd Mayweather was the only student to win which award at his high school’s annual Book Report competition?

QUESTION: If you purchased a copy of a 2016 romantic musical film starring Emma Stone and Ryan Gosling, what did you most likely buy?

QUESTION: How would Floyd Mayweather most likely attempt to read Landon Donovan’s name out loud?

QUESTION: Which comedy series starring rapper Lil Dicky premiered on FXX in March of this year?

QUESTION: This controversial 5’3” multimillionaire celebrity is known for having both a public sex tape and a father who’s a famous lawyer.