That was just the first 5 tweets if you search "Michael Scottie Selfish." So you get the point.

So the two main takeaways from the first two eps of The Last Dance:

1) Jerry Krause is a fat dumb short asshole. Their words, not mine. I mean thank god that poor bastard is dead. If he was still alive he'd be hanging in his closet this morning. Holy moly that was as bad as a documentary can go for one man. Robert Durst made it through the Jinx better than Jerry Krause made it through the Last Dance, and Robert ended up going to jail for life in his doc. He's lucky he wasnt around to see last night, and he's lucky he operated in an era before social media and sports coverage on the internet. Because if you're in the middle of a second threepeat...with all the main pieces intact, and, for the the most part, WANTING to continue to play for you, and you did your best to try to put an end to it? You would never survive that.

Anyway, the second biggest takeaway, and the one I'm here to talk about

Scottie Pippen has long been the guy known for having the worst contract in sports history. Its on full display now and its fun to watch the younger generation lose their minds over how under paid he was, but this isnt a hindsight is 20/20 thing. In realtime back in the day everyone knew Scottie was getting fucked. Look at the money he made in Chicago: 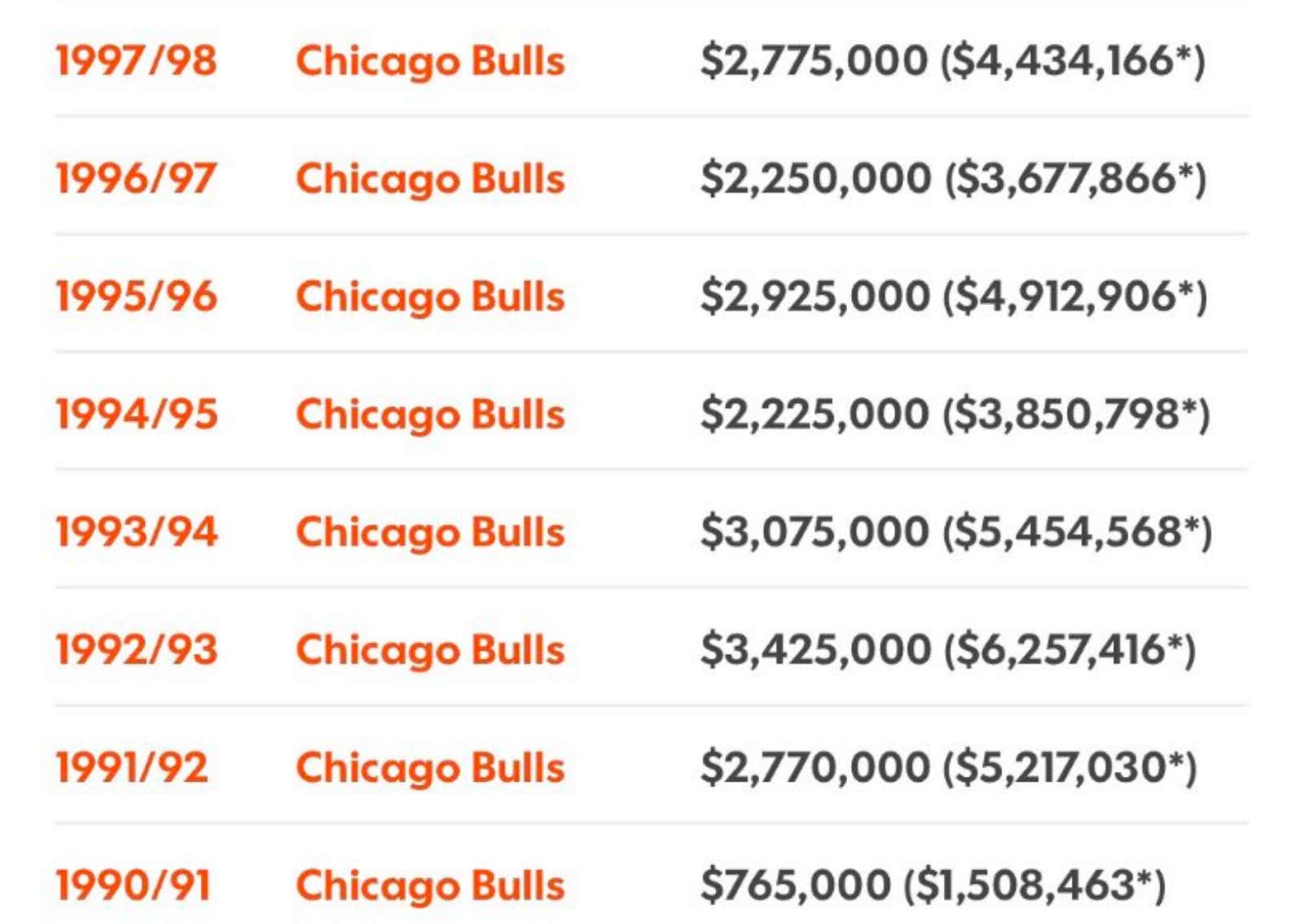 Not only is that deplorably low...but who's contract varies up and down like that? As you come into your prime...and as you clearly emerge as MJs number 2...you drop 300k? Then drop nearly a million? Only to get a 700k raise, then another 700k paycut, finishing with a 500k bump. I mean what in the FUCK is that? Scottie Pippen's agent and George Bluth's lawyers: the fucking worst

There is absolutely no denying that Scottie was criminally underpaid, that he had the worst agent ever, and that Scottie had every right to hate the front office (apparently like every single player, coach, and person in the world did). I'd even go as far to say as Scottie then, in turn, was justified in his behavior regarding his injury. You get what you pay for. And Jerry Krause and company did not pay enough for Scottie to fuck up his summer: 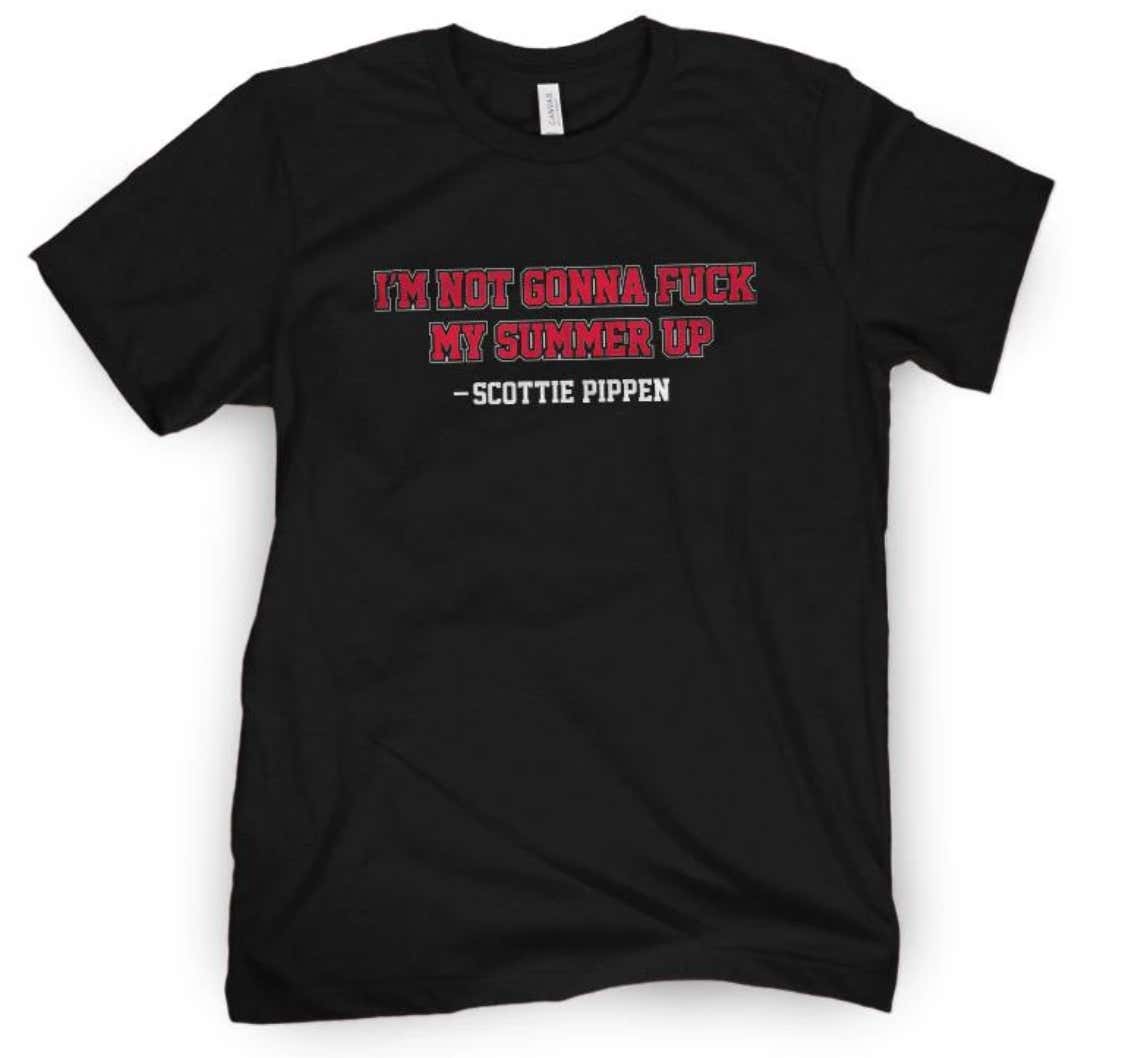 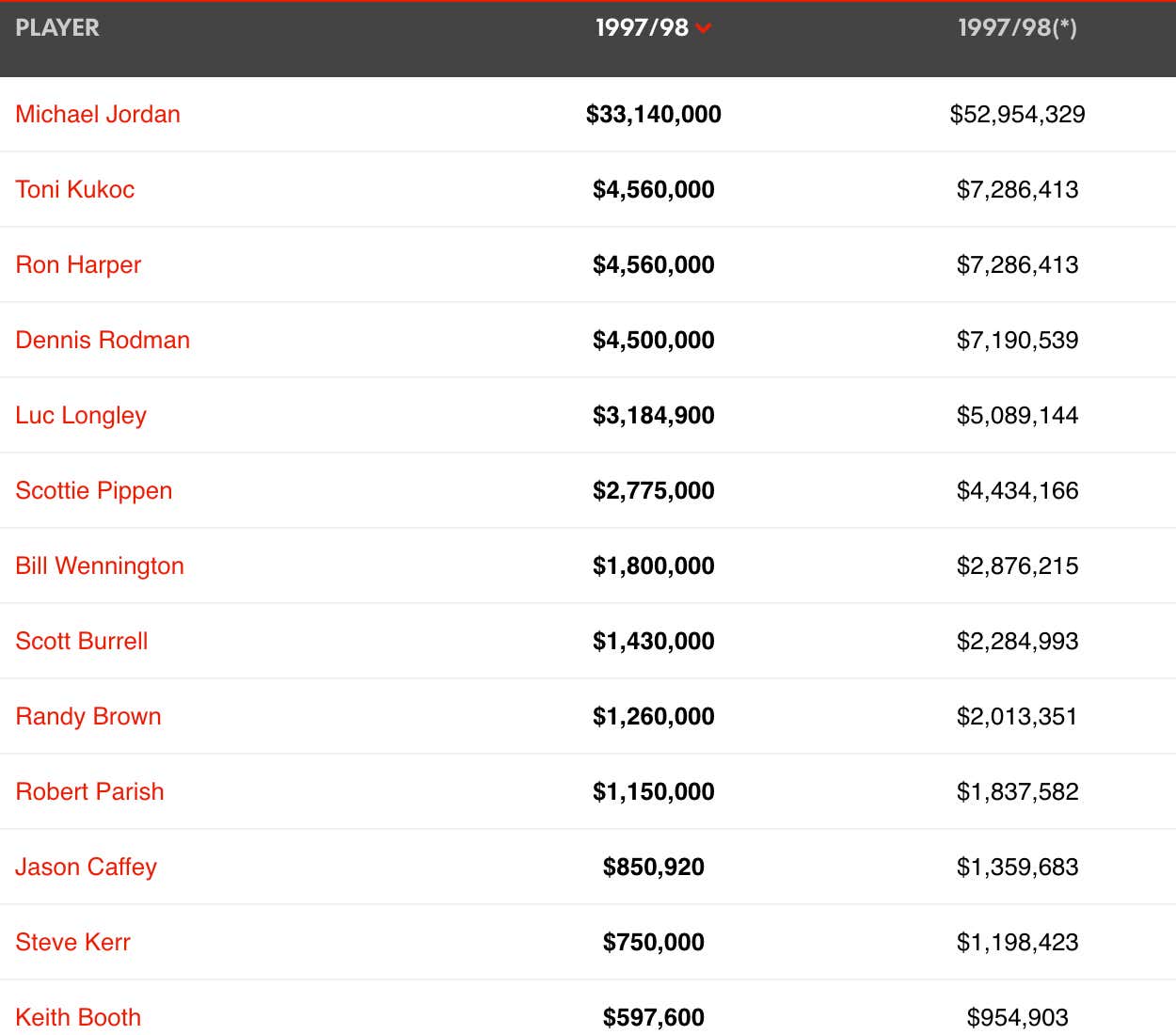 Now I understand the comment calling him selfish is what set this off, and yes, thats a bit judgmental considering its probably Scottie's pay cut that allows for a legendary Big 3 instead of a phenomenal 1-2 punch. And that trickles down to a Ron Harper and a Toni Kukoc and thats how you have a second three peat. BUT, facts are facts - Scottie Pippen chose to get surgery after the summer because he was looking out only for himself. That is, by definition, selfish. Justifiable selfishness from Pip from his point of view, but thats not what MJ is concerned with. MJ is not thinking about Scottie's bank account or his pride or his relationship with Jerry Krause. He's thinking about finishing off his career and his second dynasty with a bang. That was put in jeopardy by Scottie's decision. From MJ's point of view, and from the rest of his teammates point of view, that is, in fact, selfish. And I dont think theres a problem with saying that 20 years later. Just in a casual "Yea, that was a little fucked up." I actually can understand how ironic and tone deaf it sounds when someone is making 15x your salary and calls you selfish, but when you look at the circumstances, he aint wrong. Perhaps a little more bedside manner from MJ would have helped. Perhaps a disclaimer of like "I know what his situation was and I understand his thought process, but as his teammate I thought..." would have come off better. But I dont think you're gonna get that from Michael Jordan when hes discussing playing basketball. Being ready to go when the season tips off, competing, and winning is all MJ knew and what he always demanded.

I see it from both sides, but at the end of the day, everyone is responsible for their own money, and doing their own job.

PS - Scottie ended up making just over $100,000,000 in his career. Ended up getting paaaaid by the Blazers and Rockets. Thats $10 million more than the career earnings of MJ. Which is wild when you consider all the circumstances. MJ and Scottie played ball in the same era. Yes, MJ came a few years before him, but for the most part heavy, heavy overlap in their careers. Michael was the greatest to ever do it and a money making sensation...Scottie was regarded as the cheapest player in history for the first 6 years of his career. And yet he still ends up out earning him with basketball contracts. Its a testament to how much the NBA grew and exploded during that David Stern era, and probably thanks to Michael Jordan. Like yea he was kind of an asshole saying he was selfish, but the reason Scottie ended up making 9 figures is because of what MJ turned the NBA into. So in the end, everyone is drowning in money and rings. I think the "selfish" comment 20 years later can slide.