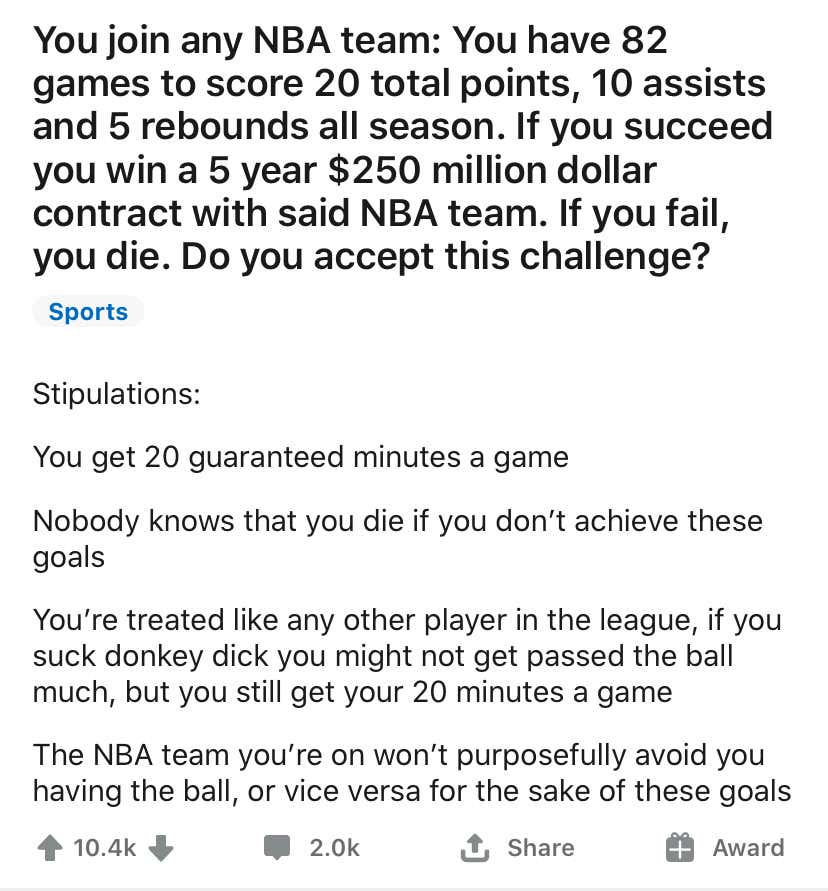 I love me a good, "Could you do X?" For anything really, but sports in particular, because things like putting a ball in a hoops are things most people think they can do with most having no conception of how difficult it is to do at a professional level.

When it comes to these things, I am generally on the totally opposite side than I am for this one. Usually, I am dubious of one's chances to complete whatever sports task is listed. However, I have never been more certain I could do something in my life.

So we're talking about a *total* of 20 points, 10 assists and five rebounds over a full 82-game season with a guaranteed 20 minutes per game. Or in other words, one point every 82 minutes, one rebound every 164 minutes and one assist every 328 minutes. If you stood on a basketball court for that length of time with any semblance of an idea of what you were doing, you would have to try to not luck into at least double those stats.

If you took just three two-point shots in each game, you would only need to shoot four percent on the season to reach the 20-point mark. And as I said, the rebounds and assists would come almost by accident.

But then there's the risk and reward. Completion of this challenge nets you $250 million — a staggeringly life-altering amount of money. But, if you fail to record the requisite stats, you're out of here. Even with death on the table, the promise of a quarter of a billion dollars is going to take a lot more than 20 points, 10 assists and five rebounds to keep me from taking a swing at it.