Writer's Note: Hi, I'm Dope Ropes. I'm a nerd from the South Side of Chicago with historical NFL gambling success who began blogging my picks and weird-ass analysis on an independent site four years ago, just trying to have fun while making money for my friends (including Carl). A couple years ago, I left insane voicemails on Red Line Radio and Carl eventually brought me on as a Barstool Chicago intern to write NFL gambling blogs throughout last season. Currently, quarantine is overlapping with paternity leave from my real job, so I'm taking the opportunity to write about what I love for a company and fan base that I love. Follow on Twitter @DopeRopesChi

With the NFL draft fast approaching, I figured we could take a trip down memory lane and reevaluate the 61st pick in 2013, Green Bay Packers running back Eddie Lacy. If you think an Eddie Lacy blog is out of place in the year 2020, you're correct. But I'm losing my mind after 5 straight weeks of no live sports, so roll with it. Seriously, the competitive action of the Cat Cave Derby is the only thing keeping me alive right now. Here we go.

Eddie Lacy shot out of the gate with over 1,000 rushing yards and Top-10 RB fantasy scoring in each of his first two NFL seasons, but there were some red flags that draft evaluators missed that could have helped anticipate Lacy's career falling off a cliff by the end of his third season. Based on his strengths coming out of Alabama (light feet, balance, power), scouts drew comparisons to Frank Gore, which is hilarious because Gore was drafted 8 years before Lacy, and Gore is still active today. Scouts identified blocking as Lacy's most glaring weakness, but I have a few more to retroactively add to the list.

Weakness #1: Wears boxers on the gridiron 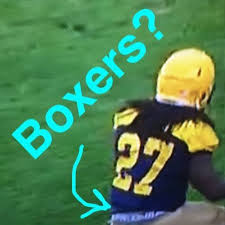 Apologies for the picture quality, but I took it many years ago on a Windows phone. Hand up, mybad on the choice of mobile device. The salesman at Sprint must've hammered some sweet commish when he pawned off that trash into my stupid hands.

Even though the pic has the resolution of a Bigfoot sighting, you need to trust me. I saw it with my own eyes - Eddie Lacy was wearing boxers in a professional football game.

Apparently Eddie never learned this lesson. There he is on the field of battle, sporting boxers like the creep from Backroom Casting Couch. Can't trust it.

Eddie Lacy could not stop referring to Chinese food as "China food."

"China food" feels vaguely racist, but it isn't, right? It's just "[country] + food." Lacy's terminology technically isn't wrong, but referring to a popular cuisine in a way that no human has ever referred to it is enough for me to ring some alarms.

Side note: I guess I can't be too critical. From the moment I first heard "China food" I have never called it "Chinese food" since.

Weakness #3: Does not prioritize nutrition

This dovetails off of #2, but Lacy's aversion to portion control cut his career woefully short. He had incredible raw agility and power...

... but he only went as far as his youthful metabolism would take him. He took the tank of gas that the good lord gave him and did nothing to replenish it after hitting empty. He of course ended his career with the only NFL franchise that would accept an out-of-shape running back in the last gasp of his career:

Well, 2.6 yards per carry in Seattle feels pretty "wrong" to me. If Lacy cut down on sugars and mixed in some vegetables, he could've played twice as long and landed tens of millions of additional dollars. Just a perplexing refusal to sacrifice the chonk lifestyle.

In total, I'm reminded of Charlize Theron's character on Arrested Development, Rita Leeds. Jason Bateman's character falls in love with her through her beauty and British charm, but it's eventually revealed that he completely misread the situation and failed to recognize that something was "off" about her. If you don't get the reference, you can research Rita Leeds on your own time, but I am not co-signing on the "MRF" term as part of my comparison here.

But that was Eddie Lacy. His abilities made scouts swoon, but there were some odd characteristics that flew under the radar and eventually led to his downfall.

Best of luck to your team in the draft tomorrow - I hope they nail their evaluations, unless of course you're a Packers fan.