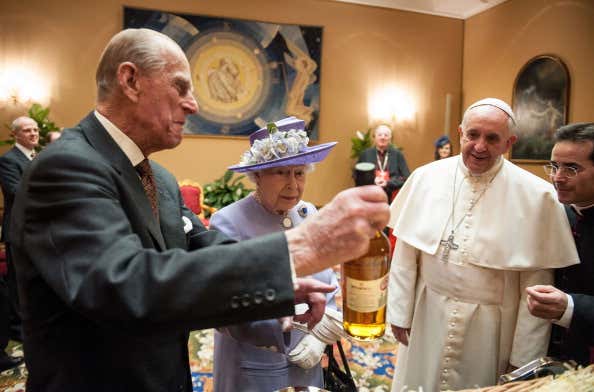 Source -  Footage of Pope Francis holding up a bottle of Scotch and proclaiming it “the real water of life” was censored by the Vatican ahead of a new documentary about seminarians at the Scots College in Rome.

The footage featured the Holy Father accepting a bottle of Oban malt from a group of Scottish student priests at a reception at the Vatican’s Apostolic Palace last year.

But Vatican media insisted Il Papa’s quip was cut from the film. ...

Director Tony Kearney, whose Solus Productions made the one-hour documentary Priest School, followed the Scots seminarians over 18 months in 2018 and 2019. ...

“He was really down to earth with them all and when they handed him the bottle, instead of just handing it to his assistant as he normally would with a gift, he held it up and said ‘Questa e la vera acqua santa’, which means ‘This is the real holy water.’

“He guffawed with laughter and it was a real ice-breaker with the students and put everyone at ease [but] they insisted they didn’t want the Pope to be seen to be endorsing whisky. I think it’s quite funny how guarded his image is."

And that, my friends, is why he's The Cool Pope. And why the Vatican needs to slow their roll when it comes to worrying about all the wrong things.

"Endorsing whiskey"? Pardon the unintentional pun but, God forbid! Imagine an 83-year-old Catholic cleric from Argentina saying something nice about booze. Booze that is as much a part of the fabric of life for the seminarians who handed it to him as vodka is to Russia, coffee is to Central America or meth is to Florida. Besides, the last I checked he was the head of a church of about a billion people, 999,999,000 of whom appreciate a cocktail or two under extreme social pressure. Or distancing. When the President of the Mormon Church starts talking nice about delicious, life-affirming Scotch, worry about that. But in this case, lighten up, everybody but Francis.

Besides, it's not like someone handed him a slice of Wonder Bread and he said, "Mmm, now there's the real Body of Christ!" He's saying something nice about a drink that did nothing less that help bring about human civilization. I am not joking. The moment in time that early humans stopped being a loose collection of nomadic tribes is when they discovered they could distill and brew grains. FACT. So they started to settle down, learned to farm, and created the first villages.

So show a little respect the next time the infallible spiritual leader of one of the world's leading faiths calls the finest distilled spirits ever created "holy water."

And worry about something else. I'm sure the Vatican looks hard, it can find some matters that are a little more pressing.