Pitchfork- It happens to most of us at an early age: the realization that life will not follow a straight line on the path towards fulfillment. Instead, life spirals. The game is rigged, power corrupts, and society is, in a word, bullshit. Art can expose the lies. The early music of Fiona Apple was so much about grand betrayals by inadequate men and the patriarchal world. Did it teach you to hate yourself? Did it teach you to bury your pain, to let it calcify, to build a gate around your heart that quiets the reaches of your one and only voice? Fetch the bolt cutters.

Fiona Apple’s fifth record is unbound. No music has ever sounded quite like it. Apple recorded Fetch the Bolt Cutters both in and with her Venice Beach home, banging on its walls, stomping on its ground. Self-reliance is its rule, curiosity is its key. Fetch the Bolt Cutters seems to almost completely turn the volume down on music history, while it cranks up raw, real life—handclaps, chants, and other makeshift percussion, in harmony with space, echoes, whispers, screams, breathing, jokes, so-called mistakes, and dog barks. (At least five dogs are credited: Mercy, Maddie, Leo, Little, and Alfie.) All of this debris orbits around the core of Apple’s music: her voice, her piano, and most of all her words, which have always been her primary instrument. It creates a symphony of the everyday.

In the past, Apple has said John Lennon was her god, and she wrote lyrics and melodies on par with the finest pop songs ever recorded. But Fetch the Bolt Cutters feels more conceptually akin to the revolutionary risk-taking of saint Yoko Ono—a woman who once wrote, “I like to fight the establishment by using methods that are so far removed from establishment-type thinking that the establishment doesn’t know how to fight back.” Fetch the Bolt Cutters does something similar. It contains practically no conventional pop forms. Taken together, the notes of its found percussion and rattling blues are liberationist.

Allow me to begin this blog by saying I hate Pitchfork. I don't hate many things in this world but that website is one of them.

They're not evil or anything, they're just littered with some of the most pretentious assholes on the internet, writing about how much superior their music taste is to yours, while using vocabulary you probably won't fully understand to do so. I don't even disagree with their reviews/opinions of certain albums or artists all that often either, I just despise how they put those takes into words a lot of the time.

This morning, to the surprise of many, the website gave Fiona Apple's 'Fetch The Bolt Cutters' its first perfect score (10.0) in almost a decade - the last perfect score being Kanye West's 'My Beautiful Dark Twisted Fantasy' - and they ain't the only ones fired up about it, either! 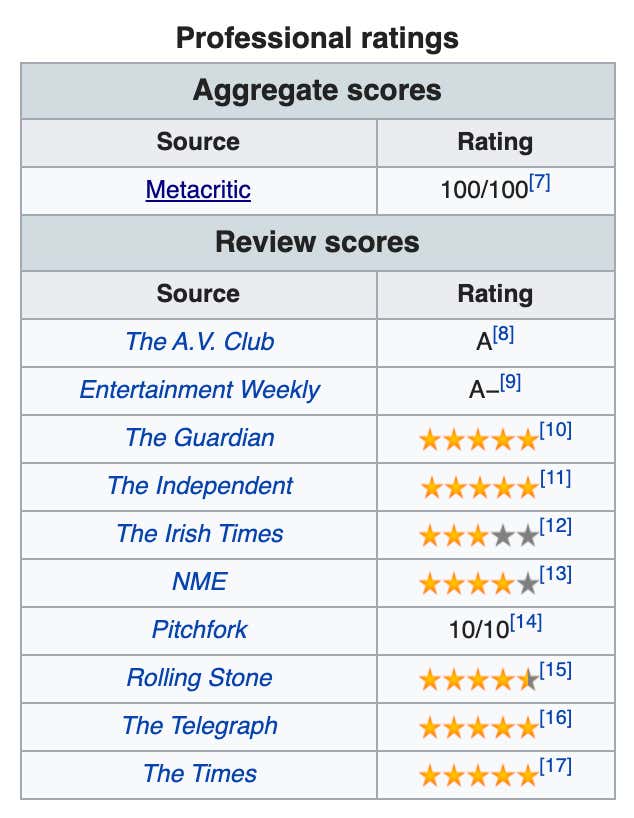 Admittedly, before today, I didn't know a ton of Fiona Apple stuff. I'd say I knew her 'Across The Universe' cover, 'Criminal', 'Paper Bag' - and that's probably it.

After giving 'Fetch The Bolt Cutters' a full spin, that's definitely gonna have to change. I think I'm a Fiona Apple fan now. It's weird. It's not going to be for everybody. There aren't any tracks that I imagine will get any major radio play. There's a buncha fucked up tempos and time signatures that make things hit your ear strangely upon first listen, and I think it's definitely fair to describe this as an "artsy" record. It's fucking gooooooood, though! Like…really good!

There's so much groovy percussion all over the album that had me nodding along constantly, raw-ass vocals (reminiscent of 'Jagged Little Pill') blaring over em, gorgeous piano melodies played to perfection, super jazzy bass lines and electronic loops (which reminded me of St. Vincent's 'Masseduction' at times), every song bleeds right into the next perfectly, sometimes to the sound of barking dogs (five of which are credited on the album) or off-beat claps or strange multi-layered vocal hooks - I actually have to agree with Pitchfork writer Jenn Pelly when she said, "No music has ever sounded quite like it." None I've ever heard at least.

I don't know if I'd say 'Fetch The Bolt Cutters' is the best album I've heard in a decade, or that it's a definitive flawless 10.0, or anything of that nature - it's so friggin ridiculous to rate music on a numerical scale and it'll hit different for everyone - but I will say that it feels like Fiona Apple took a maaaaaaaasssive risk with this record and it paid off massively, and that she made the exact product she set out to.

It's a nice lengthy 13-track/51-minute listen, and I KNOW you've got nothing else to do today, so give it a shot. Kill some time. Let me know what you think. At the very least, you'll broaden your musical horizon a little - because like I mentioned - this shit is weird!

P.S. How about Pitchfork taking Fiona Apple saying John Lennon was her God and going, "Well actually, she's a bit more like THE LOVELY AND REVOLUTIONARY SAINT YOKO now!"

NO! STOP IT! Fuck you, Pitchfork! Fuck you! This is why I hate you! I get the analogy you're making (and that quote actually works pretty damn well with full context) but still - NO! Stop trying to shoehorn Yoko into every Lennon discussion! Stop it!