Not gonna lie, I was looking forward to Star Wars night with Lights, Camera, Barstool, Clem and Robbie Fox all week. Human interaction with extremely good-vibes people while housing junk food in my LaZBoy? Big plus.

And as an added bonus, I would no longer be that annoying person you find in every group who has some weird sense of pride about making it two or three decades into life without seeing it. For *reasons I don't quite understand I delighted in people's reactions when they'd find out I hadn't seen any in the series. (*attention)

I was excited to be brought into the fold and even got dressed up like Princess Leia (and was then quickly informed by Star Wars diehards that I was doing the wrong Leia hairstyle for this one).

Anyways! Off we went:

And here's some of my main takeaways after letting it marinate for a few hours:

Obe Wan Kanobe - Not a robot as I expected because that is 100% a robot name.

Slipping through blast doors at the last minute - Is there anything Americans love more in cinema that a hero slipping through a door hole or under a closing gate or out of a trash compactor at the last second? This had plenty of that. Yes, keep it coming.

Darth Vader - The cape is cool as shit but also… do you really want a cape when you're running all over the place doing evil stuff? Do you know how easily a light saber could snag that?

Jek Porker - That rebel pilot at the end who has a little more mass than the others. When that guy got the script and was like, "Ooo, what's my character's name?!"… I wonder if he was like, "Waiiiit a minute… Jek who?!!" 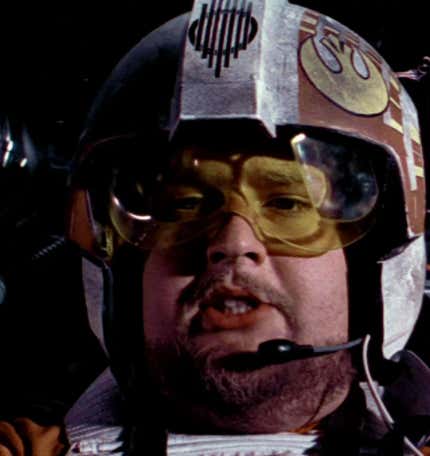 That's about all that stands out to me for now besides a general feeling that I enjoyed it, but mostly because Robbie Fox & Jeff D. Lowe made me feel like I was watching the movie in VH1 Pop Up Video form… They showed me funny mistakes (like a visible string connecting Obe Wan's light saber to his hand, or Harrison Ford floating over that giant slug's tail) to cool facts about the toys spawned by the series, and behind the scenes stories on the actors. I loved that.

Probably something that took away from my experience and what t I did not tell anyone out of embarrassment is that I couldn't figure out how to get the Closed Caption going and with the movie turned nearly all the way down so I could hear the gang in my headphones I pretty much didn't hear anything in the movie. Ope! But hey, still a delight!

Final notes: Scrolling back through the full video to see my main takeaways again it hit me that for 90% of the movie I was eating something and it was extremely flattering. 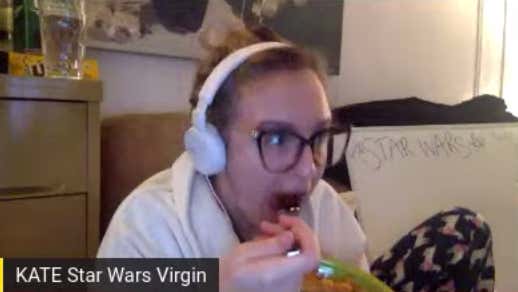 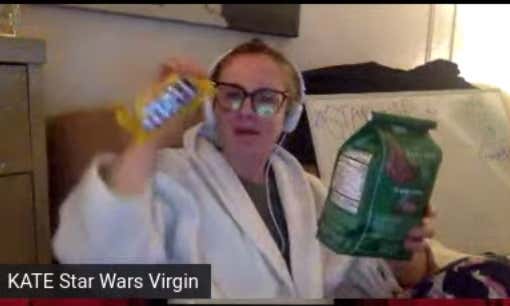 AN ENTIRE SLEEVE OF TATE'S BAKESHOP DOUBLE CHOCOLATE COOKIES. I scrolled through the YouTube playback and took a screenshot every time I started in on a new cookie. Nothing matters in Isolation Month II. 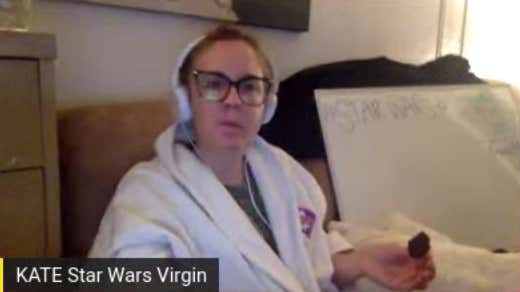 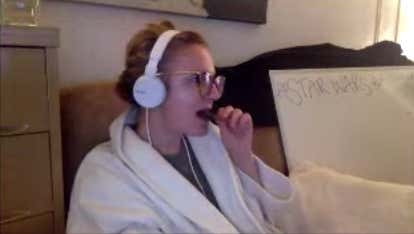 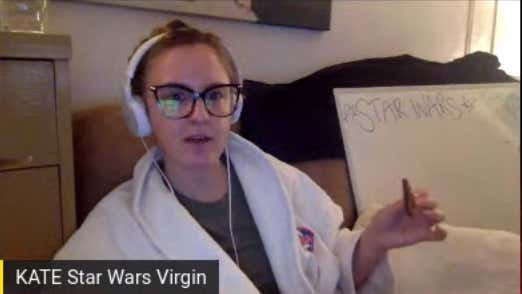 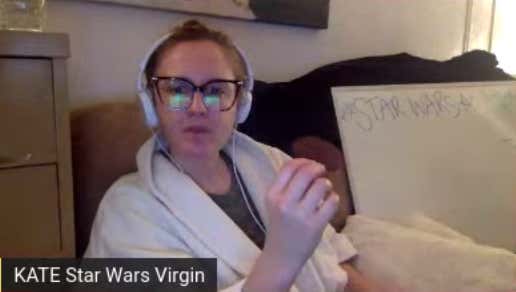 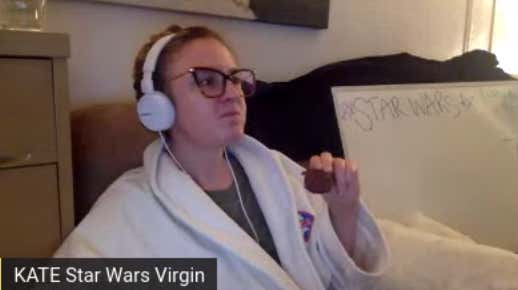 THE DEATH STAR: Not food but I want to talk about it real quick.

At the end they made me the only screen viewers could see to get my reaction to the ( SPOILER ALERT --> ) Death Star blowing up. Instead what happened went totally over my head. Wait - who shot the laser beam down the hole? Did I blink and miss that? How did the good guys survive the explosion?? Harrison Ford made a big show of dipping out and now he's just back and even though all the high speed good guys got killed he survived in his big, clumsy ship? Wait, is that it? Darth's still spinning around out there?! 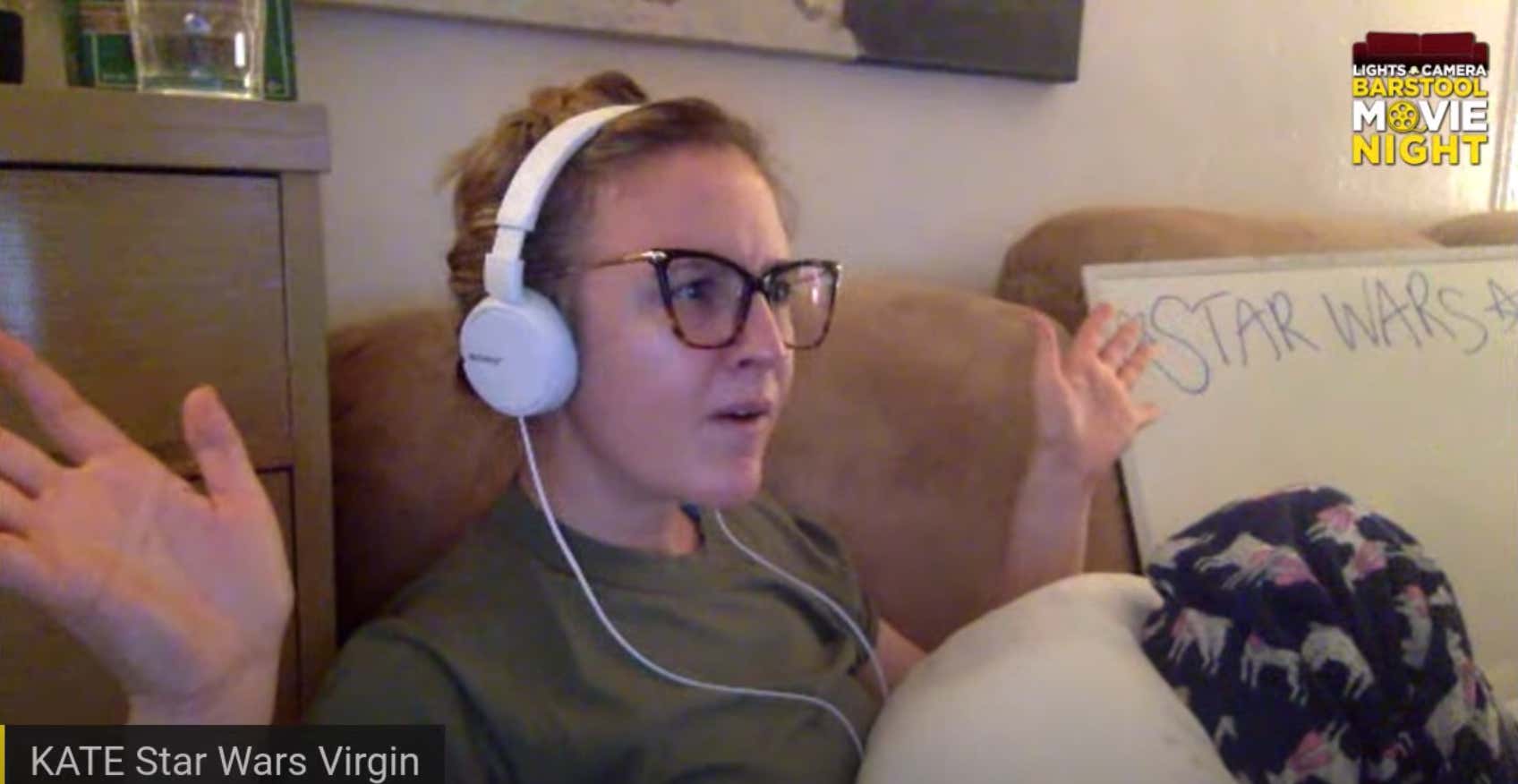 Be sure to tune in next week when LCB has an actual Star Wars expert to watch the 2nd movie in the series; the gent who wrote the Family Guy version of it. Pretty darn cool.