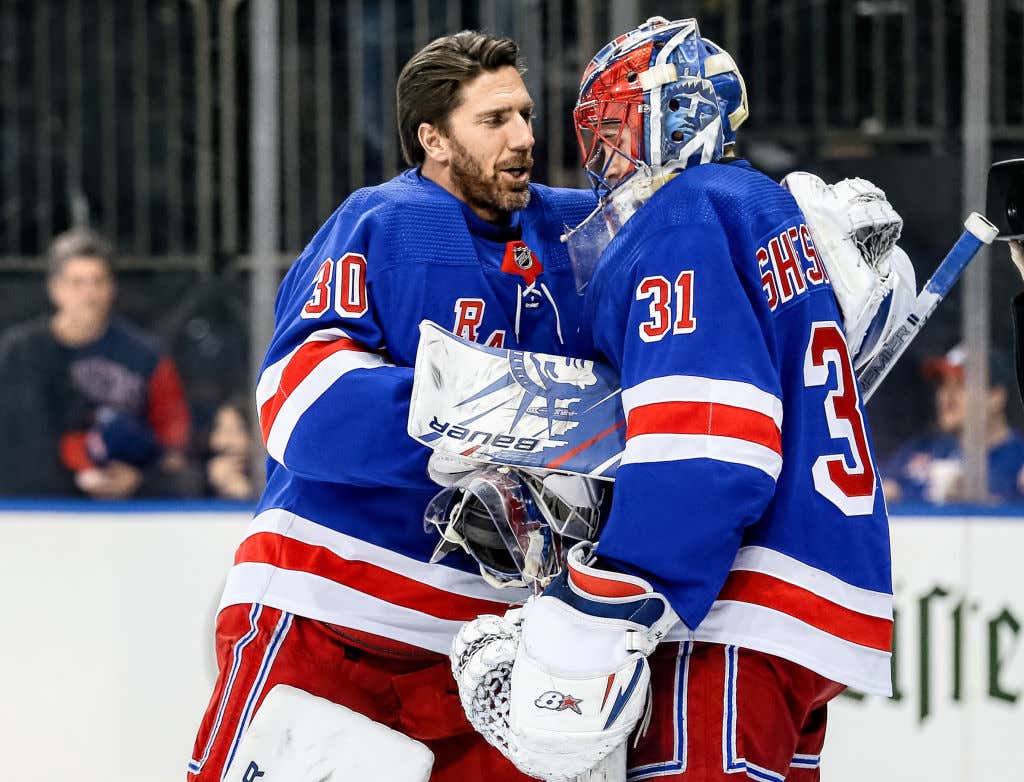 Regardless of whether or not the current NHL season continues, it's safe to say the former face of the franchise & unquestioned HOFer Henrik Lundqvist won't be a part of the 2020-21 NY Rangers. The rapid rise of Igor Shesterkin & reliability of Alexander Georgiev, both 24, are the go-to tandem for the immediate future. Sure there's potential for an off-season move with Georgie but I think he's more valuable to the Blueshirts as a cost-controlled Option B unless someone's willing to come in with a ready-now forward they simply can't refuse.

Realistically assuming that offer doesn't come, it's the end of the road for Hank one way or another. The team certainly doesn't want to do the three-goalie shuffle for another year & I'm sure #30 doesn't want his career to end like that - which is the same reason why he won't retire. Teams aren't going to trade for him even if they only have to float half his $8.5M cap hit, and even if somehow there's a match Hank still has full veto rights. There's only one logical way this ends and that's a buyout, which allows the King to offer his services to any contending team willing to fork over a bargain-bin contract for a veteran netminder starved to make one last push at a Cup.

I went through all squads reasonably in playoff contention this year and picked who I think are the three best matches in each conference based on overall fit including whether a team could realistically "win now", opportunity for playing time, etc. Here's what I came up with.

Carolina - Obviously the Rangers would prefer Hank signs outside the division, but a buyout gives him carte blanche & I don't see a fit in the Atlantic. To me the Canes are ideal. Rod Brind'Amour's squad is young, loaded on defense & ready to make some serious noise. Both of their current goalies (Mrazek & Reimer) have a year left on their deals but, despite anchoring the league's second-best team in terms of shot suppression, neither showed the ability to lead a contender. They'd have to move one of them to make room but I think they'd easily do so to catch lightning in a bottle with an all-time great at a much cheaper price tag.

Washington - I think the next-best fit would be the rival Capitals. Holtby is a pending UFA coming off a couple pretty bad years and I can't imagine DC brass are gonna pony up anywhere near the price tag he'll get elsewhere. Samsonov is clearly the goalie of the future, but with just 22 pro starts under his rookie belt the 2018 champs will make sure they have a more-than-serviceable contingency plan. Enter Lundqvist, whom the Caps have seen plenty of over the years. Should Samsonov struggle or get hurt, his squad would be plenty confident in handing the reins over to Hank as opposed to another unknown or a career backup.

Philadelphia - The Flyers are in a similar position to the Caps. Carter Hart has more experience and Philly is new to the "win-now" list but the AV-led team were tops in shots against per game and would be an ideal fit for a guy like Hank used to seeing a barrage. Brian Elliot will be a UFA so they'll be looking for some security behind their stud. I know Vigneault and Lundqvist didn't part on the best of terms in NY but I can't imagine that'd take such a good option off Hank's list of potential landing spots. With a majority of their best players in their late-20's/early 30's, Philly won't find a better security blanket in net to avoid an unaffordable wasted season.

Vegas - This might be the top of the list in terms of fit for both sides. Marc-Andre Fleury is under contract for another 2 years at $7M per but the 35 year-old really struggled this season from December on - hence their acquisition of pending UFA Robin Lehner at the deadline. Assuming Lehner is gonna command way too high a price tag seeking out a stable starting gig, the Golden Knights are gonna be on the hunt for a cheap yet capable 1B. Lundqvist could thrive behind an elite shot suppressing squad, keeping MAF's workload down or even taking over the 1A slot if Fleury's demise continues.

Edmonton - I don't think the Oilers truly qualify as a "win now" squad but, when you're a Canadian city who's seen their team participate in just one of the last thirteen postseasons & you're built around arguably the top two offensive studs in the league, there's plenty of pressure for immediate success. Koskinen still has a couple years left at $4.5M per but never separated himself from 38 year-old UFA Mike Smith. Edmonton is far from a defensive juggernaut but could be Hank's easiest path to starts as Dave Tippett split them right down the middle this season. With money tight, would you rather have Koskinen or Lundqvist manning the playoff crease?

Calgary - The Flames could be in a tough spot next season in terms of salary cap with only three rostered blueliners under contract. They'll have a goaltending hole to fill as well behind an inconsistent David Rittich as former Blueshirt Cam Talbot hits the market, so a bargain-bin vet with elite career playoff numbers might be exactly what they need. In a wide open Pacific division, Calgary doesn't want to waste an opportunity anchored by a huge question mark. They'll eventually have to address the position long-term but for now, Lundqvist makes a great stop-gap for a year before both he and Rittich are off the books to go top-shelf goalie shopping.

Hank's overall numbers look bad - thanks in large part to a Rangers defensive structure still a long way from respectability - but he was actually above-average at even strength. And when it came to making saves goalies shouldn't make, Mackenzie Blackwood was the only Eastern Conference goalie who prevented more high-danger ES goals against per-60 than Lundqvist. Maybe he can't singlehandedly carry a team anymore like he did the Rangers for over a decade, but put him behind a contending squad with proven defensive aptitude and worst case, you'll have an above-average backstop with top-10 potential for one last push before hanging them up.