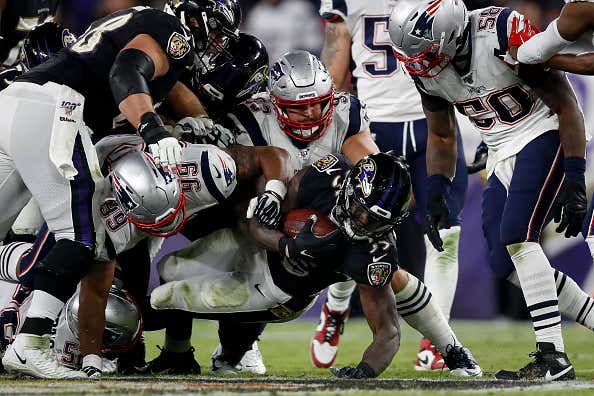 Positional Overview: As with all living things, the position of interior defender in the NFL is evolving. (Sorry to lose all you fundamentalist readers who think we came into the world fully formed 5,000 years ago, but  go handle your snakes somewhere else.) Birds, reptiles, mammals, me over the last month becoming more sofa than man, everything adapts in order to survive. And professional defensive tackles are no exception.

As the league changes, so does this position. There is a still a role for huge, space-eating war daddies. It's math. As long as offensive fronts have seven or eight gaps to fill, there will be a need for men to fill them. Sometimes one man to fill two at a time. But as teams go to more spread formations and those seven or eight turn into six, and someone's job is going to be outsourced to a defensive back.

And also, the emphasis is more and more on pass rushing from the interior. To state the obvious, everyone's looking for the next Aaron Donald. Someone with the quick twitch burst to shoot gaps and collapse pockets from the inside. So those Reubenesque, run-stuffing gentlemen who would've been Top 15 locks a generation ago are falling to the later rounds.

For the Patriots, there is never not a need at this position. Bill Belichick has a thing for large men. In 20 drafts, he's selected 14 pure defensive tackles among his 30 overall D-line picks. Including back to back first rounders in 2014 and 15. And that doesn't include all the capital he spent of 3-4 ends like Richard Seymour and Ty Warren in the early championship days. Like his Jedi Master Bill Parcells was fond of saying, when you want big guys, you have to get them from the big schools. So if you're shopping for players who shop at the Big & Tall store, you know that that's where you have to start. And after his front essentially rolled over and let Derrick Henry scratch their belly in the Wild Card game and losing Danny Shelton to the Detroit Patriots, Belichick has to bring in reinforcements.

After playing through his senior year at Auburn, Brown comes into the league ready as a Day 1 plug and play starter, with the polish and fundamentals of an experienced veteran. He's got a variety of moves and counter moves to fend off blocks, including a swim, a rip, a push-pull. With the size and strength advantage no matter where you line him up. In school he was one of those overachievers who makes the rest of us who just wanted to float to graduation on a river of Nattys look ridiculous, winning academic and community service awards and being the Advisory Committee president. Even with his size, he's got the wheels to chase runners down from behind. And as his 28 reps on the bench press at the Indianapolis Gym Class would indicate, he's got upper body to ragdoll even big tackles. If he's limited anywhere, it's as a pass rusher. But then he's got the length to get his hands up and disrupt passing lanes. And good luck to any guard who's left to solo block him.

Compares to the Other Leading Brand: Akeem Hicks

Another Certain First Rounder the Patriots Met with in Indy:

Kinlaw is another senior who represents the Platonic Ideal of what the perfect defensive tackle body should look like. With 10 1/2" hands and a wingspan that is just under 35". He's got a better get-off in the pass rush than Brown, though his set list of moves has fewer songs on it. Which means he's got a lot more room to grow and develop. So to be fair, at the moment he's a better pure athlete than he is a football player. And he was inconsistent in the pass rush, maybe owing to the fact at SC they ran a lot of three-man rushes out of sub-packages, so he drew a ton of double teams. Even at his size, he dropped an unbelievable 40 lbs after transferring from a Juco, and became more explosive, with a lot of tape of him pursuing sideline-to-sideline. But too often overpursues and teams have taken advantage of the aggressiveness. He finished his three seasons with 95 tackles, 10.5 sacks and 10 passes broken up. For any team that can coach him up and harness all that freakish athleticism, his potential is off the charts.

Compares to the Other Leading Brand: Chris Jones

The consensus Best Action Movie Detective Name in his class, if not all time, Blacklock played a lot of traditional nose tackle for the Horned Frogs, either heads up on the center or a 1-shade in the C-G gap, with a lot of stunts and slants. And that makes him a little hard to evaluate. He's projected to be more of a 3-tech in the pros and take advantage of that speed and burst that is rare for a guy his size. He's more of a gap penetrator than someone who's going to fight off a blocker because he's not built for that. Still he's got the lateral quickness to have made himself one of the highest graded tackles against the run according to the analytics crowd. He had an Achilles injury which cost him some time, but shows no effects from it other than some lack of experience. He's a high energy guy with a ton of upside with the right system fit. And probably right now the best interior pass rusher in his class.

Compares to the Other Leading Brand: Sheldon Richardson

Jordan took kind of the long way around to get to the draft. He started out at Texas. Got hurt. Transferred to Mizzou. Sat out. Had an OK redshirt freshman year. Then took a huge bounce last year, doubling his totals with 44 tackles, 8.5 for loss, 2.5 sacks and three batted balls. There's a knock on him that it makes him a One-Hit Wonder but scouts will tell you he's more of a Two-Hit Wonder. That if he was the band Fun, his last games against Tennessee and Arkansas in 2018 were the "We Are Young" to his 2019 "Some Nights." As you'd imagine with a player who look such a circuitous route - and with less than 500 total snaps before last season -  he's got a lot of being coached up to do. But as it stands he's that guy who can do everything pretty well, with a decent variety of pass rush moves and the lean, muscular build to be a gap rusher.

Compares to the Other Leading Brand: Kawaan Short

As traditional, 0-tech nose tackles go, Gallimore is the girl in the 90s movie who takes off her glasses, puts her hair down and gets a makeover and totally transforms herself. He dropped 30 pounds in one year while you've been yoyoing the same 10 pounds on and off again. And now he is the most explosive, gap-shooting inside rusher in this bunch. Interestingly enough, he's from Ottawa, which I guess would make him yet another immigrant who came here to sack the quarterbacks Americans are no longer willing to sack, but he made the U.S. Army All America team, so he's cool. Reportedly he's benched 500 lb and squatted 800 lb. Though unlike me, he did it all at once. So one can assume that should help him fight off guards and centers. At his best, he gets low and fires past O-linemen before they're into their pass blocking sets. At his worst, he seems to have a hard time disengaging when his first move doesn't work and needs some refinement to his game. But you will not find a more unique athletic specimen this year.

Compares to the Other Leading Brand: Quinneen Williams

Madubuike is a lot like Blacklock and Gallimore, only less so. If that makes sense. He's another guy who'll be best suited to line up in the G-T gap and get by on burst rather than Kool-Aid Manning his way through blockers. And he's made a lot of splash plays against top opponents throughout his career (as a sophomore, a sack against Clemson, a TFL and forced fumble against Alabama, last year a pick against Arkansas and a forced fumble for a TD and a blocked kick against Ole Miss). But there are stretches where he doesn't show up on tape. Generally speaking, he's more proficient in the run game than as a pass rusher. Which means in 2020 is like applying for a job and saying you've worked with PowerPoint but not Zoom. In the right system, he could be a rotational, early down/redzone guy, with the potential to get better at rushing the passer.

Compares to the Other Leading Brand: Davon Godchaux

Another Guy the Patriots Spoke to at the Combine:

Feel free to question your manhood and your puny Spongebob arms whenever this mountain of a man passes. Because not only were Hamilton's 33 reps on the weight bench the fourth best at the Combine, they were the most by any non-offensive lineman. He was already considered one of the best run stoppers in the nation over the last two years, but then did more to help himself at the Senior Bowl than almost anyone else in Mobile. He's a bit of a unicorn in so far as he can one- or two-gap. He was a five-year player at Ohio State, but that's tempered somewhat by the fact the Buckeyes play a heavy rotation, similar to the Patriots, so that he's never taken more than 357 snaps in a season. Still, he managed to rack up 21 TFLs in his career. He's reasonably fast and nimble for a guy his size and has shown the ability to pursue from the back size on zone runs and stretch plays. There's potential there for a team that needs someone with sand in the pants early downs and short yardage.

Compares to the Other Leading Brand: Vince Wilfork

Two Guys the Patriots Have Had Video Chats With:

Murchison was a two-year star starter after transferring from Juco and he produced. He's a high energy guy who doesn't take plays off or stop before the whistle. He's produced some big games against bigger opponents, like his 3.5 sacks last year against Florida State and three sacks the year before vs. Virginia. There's an obvious limit to his athletic skills and there doesn't appear to be much room on his frame to add mass. But he plays bigger than his Lucas Oil Olympics measurables would lead you to believe, with a ton of effort. Still, those are the numbers of a DE/DT tweener and rotational player.

Compares to the Other Leading Brand: Zach Seiler

I usually include a heading for the Sleeper of the group, and Winsdor is that guy. Maybe nobody helped improve his stock with his week of practices in Mobile than him. In his senior year he produced 40 tackles with five for loss and 3.5 sacks, including a game where he dominated Iowa with 2.5 TFL and 1.5 sacks. In 2018 he had 7.5 sacks. He's a little light for his size but has the frame to use carefully chosen, league-approved supplements to add bulk. He's a guy who gets by on sound technique and effort to compensate for his less than ideal power. But he's got a long stride that helps him cover ground on backside pursuits. And he's a sound run force tackler. But he's probably at this point best suited to be a situational interior pass rusher with the potential to be a solid 3-down rotational guy.

Compares to the Other Leading Brand: Dalvin Tomlinson

The Perfect Patriot: Brown, obviously, who reminds you of the prototype of a DT in the Belichick system, Richard Seymour. But more realistically since the Pats had to go 5-11 to get Seymour and there'll be no repeat of that, thankyouverymuch, among the guys they can realistically get, Hamilton checks the most boxes.

Whom The Pats Will Draft: Early on, Hamilton. In the later rounds, they take a flyer on Windsor as a developmental guy. The need is that great.