The fucking Nazis, man. No stone unturned. No idea too insane. They'd do anything including a "Catch Me If You Can" type of plan to complete fuck up the British economy. Formally known as "Operation Bernhard".

Back in the early part of World War II, the Nazis were "winning", but they knew they had a problem and that was the strength of the British economy. Britain had their empire raging back then. The sun literally never set on it. The Empire spanned from New Zealand to India to Africa, and Canada. More than that, the British Pound was the standard currency reserve for the world back then. Britain could spend and spend and spend and do everything in their power to win the war and Germany knew there was nothing they could do about that.

So this Nazi fuck 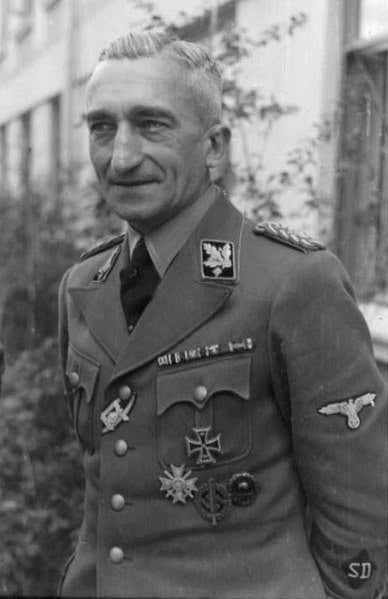 Arthur Nebe came up with a plan. He wanted to round up all the people in prison for counterfeiting in Germany and make them work for the Reich. Use their skills like the US used Frank Abagnale to counterfeit British currency. They were going to print 30 BILLION pounds worth and then air drop the cold hard cash all over the UK. This would cause hyper inflation and cripple the entire British economy and therefore, their war effort as well.

This plan got all the way up through the highest levels of the Third Reich. Even got to Hitler's desk and he said...sure why not

Operation Bernhard was a go. They got to work on this right away. The Nazis thought of everything. Found out which notes were used most frequently in circulation. Got the exact copy of the press used to print the notes. Figured out the serial designation code. Even got the chemical composition of the water down to a T used in manufacturing of the British notes so the counterfeits would feel the same when touched. They worked on this production for over a year before they finally got it perfectly right. They even had 40to 50 prisoners stand in lines and pass the money to each other to age the bills and make them look more authentic. The Nazis allegedly produced as much as 500 million pounds worth of fake currency.

Somehow, Soviet intelligence got a whiff of this secret plan and tipped off the British government. The British slightly changed the 1 pound bills and stopped producing 5 pound bills all together. They also did PSAs to inform their citizens on how to spot fake currency. Germany decided that in 1941 or so that between all the manufacturing struggles, the international trade risks associated with counterfeiting another countries currency, and the fact that the war was going GREAT for them at that point the Germans decided to stick the plan in a drawer.

Then...the War started to flip and the Allies started to win. The Germans were low on cash and were like "hey, whatever happened to that whole fake money scheme we were working on for years?" and they tried to bring it back. This time though they were just going to use the counterfeited money to finance their intelligence operations. It took a LONG time to get the program back up and running the way it was in 1941. By 1944, when the Germans were again able to mass produce fake money it was too late to be as effective as Aurthur Nebe had originally planned and, as you know, Germany lost the war

As the War was ending and Germany was trying to cover their tracks they did what they could to get rid of the bills produced. They burned some, but also dumped a ton of boxes filled with currency in an Austrian lake. Divers recovered cases of money in the 1960s and money was still being found as late as the year 2000. Fucking crazy scheme that probably would've worked if they had just done it back in the early part of the war before the US got involved and saved everyone's ass. Anyways, have a good day.