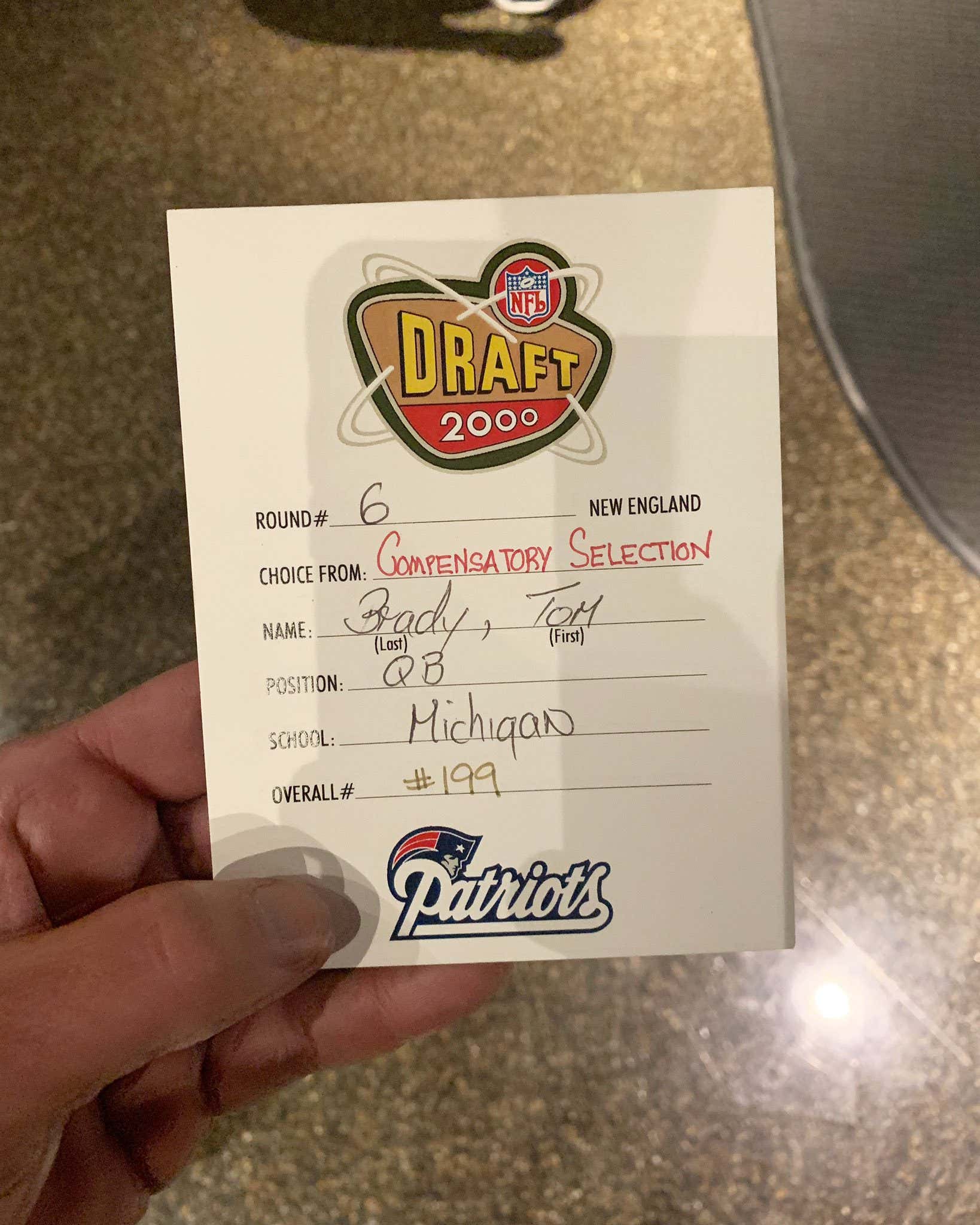 The humble origin story is a tale as old as storytelling itself. The deliverer who came from nothing to change the world is an archetype right out of our myths, our history and our fantasies. An infant wrapped in a Hebrew blanket is plucked from the Nile by Pharaoh's wife. A baby is born in a manger under a bright star. A boy who will someday free millions from slavery grows up in a log cabin. An orphan living on his uncle's moisture farm is cleaning a droid when it spits out a hologram of a princess who needs help. And so on.

And so it was that 20 years ago today, April 16, 2000, that the greatest success story began with the humblest of origin stories. It was late on Sunday. The sixth round of the NFL draft. Long past the time when most of America had tuned out. It was Patriots Day Weekend in Massachusetts, meaning the Boston Marathon was being run the next day and the Red Sox were set to have their annual Monday 11 a.m. start. On this day, Pedro Martinez was 3-0 and his brother Ramon was starting against the A's at Fenway. And its a fair bet that they were sucking all the oxygen out of the Boston sports room that weekend. Especially given that the Patriots had traded their only first round pick to the Jets to get Bill Belichick and their second rounder was offensive lineman Adrian Klemm, which didn't really move the needle for anybody.

It's amazing to watch this ESPN clip, because it's a reminder of how long ago that Tom Brady's legend began. He was drafted into a low-definition, analog, 4:3 aspect ratio world. Where our biggest concerns were Y2K and Bush vs Gore. One where Mike Tirico had a thick main of lustrous hair. Also remarkable is how everything Tirico and Mel Kiper Jr. said in real time was correct. All Brady did at Michigan was put his team in a position to win, struggle to get playing time over Drew Henson, and improve. Smart. Accurate. Throws a very catchable ball. Stands in that pocket and will take a hit. Tough. Not the most mobile guy. Everything they said on that late Sunday afternoon two years ago can be said about the starting quarterback of the 2020 Tampa Bay Bucs.

The Patriots side of the story is pretty familiar by now. Belichick and his coaching staff had just arrived and were still sorting out the mess left behind by the Bobby Grier/Pete Carroll regime. Grier had been handing out guaranteed money like a Al Czervik tipping the staff at Bushwood. And so much of the payroll was going to guys who were no longer playing for the Pats that building through free agency was out of the question, and Drew Bledsoe was almost due for an extension that would make him the highest paid player in NFL history.

So, as New England's schoolkids have been taught on Day 1 of first grade every since, with the 199th pick the Patriots war room was looking at two quarterbacks: Brady and Tim Rattay. To his eternal credit, late, great QB coach Dick Rehbein had worked out Brady, and metaphorically stood on the proverbial table demanding him. Unfortunately he died of heart failure during training camp of the following year and has had to watch all the success he ushered in from Position Coach Heaven.

And of course, everyone knows the six quarterbacks who were already off the board by then. The names Chad Pennington, Giovanni Carmozzi, Chris Redman,Tee Martin, Marc Bulger, and Spergon Wynn have been added to the seal on the Massachusetts state flag. What's lesser known is how the Pats came to be in possession of that compensatory - and therefore untradeable - 199th pick. Unfortunately, the league formula for determining the picks is so byzantine and secretive that no one knows exactly which free agent they lost got them No. 199. There's no apples-to-apples correlation we can make to say "here's the guy that brought us Brady." It was someone in the mix of LB Todd Collins, punter/backup QB Tom Tupa, DT Dwight "Wimpy" Wheeler, and OL Dave Wohlabaugh. In retrospect, letting that combination of guys walk really, really, really worked out.

As always on this historic day, one important element of this saga is that the pick of Brady turned out to be the best present anyone ever gave themselves on their 48th birthday.

Somewhere on Nantucket, an Alexa is cranking out the Bon Jovi at Volume 10.