Source - While the rest of the world is hunkered down in their homes trying to slow the spread of coronavirus, former GOP Rep. Aaron Schock has been partying it up in Mexico with a gaggle of gays.

West Hollywood political activist (and sometimes Queerty contributor) James Duke Mason was one of the first to break the news on Facebook yesterday, sharing photos of Schock enjoying the empty beaches, bars, and restaurants in Cabo San Lucas while everyone else stays home. 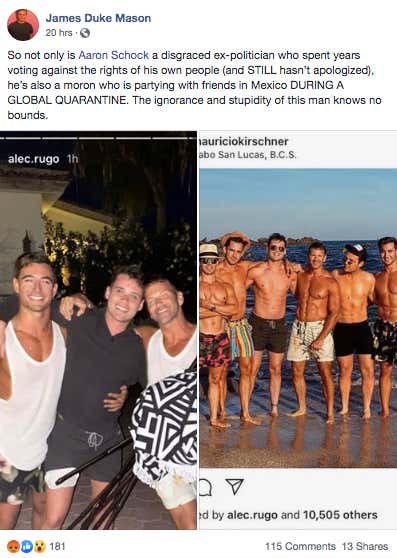 After years of speculation, Schock came out as gay in an Instagram post last month. In his coming out statement, he wrote: “I can live openly now as a gay man because of the extraordinary, brave people who had the courage to fight for our rights when I did not: community activists, leaders, and ordinary LGBT folks.”

If you need a refresher on who Aaron Schock is, you can read any one of my multiple blogs on him here. Long story short, he's a terrible person. So instead of getting into his background, I'm just going to tell you what an 'Instagay' is and we'll take it from there....

An 'Instagay' is someone who's A) usually white B) always fit, and C) never NOT terrible for the community. They're the male version of a bimbo except worse. Which is why it's not at all surprising that a guy like Aaron would surround himself with them. Regardless, people are upset and rightfully so.

You get the idea. And if we're being completely honest, as bad as it sounds, I feel like 90% of the hate coming from the gays online is because of the way they look, not because they're vacationing during quarantine. Like if these guys were fat, there wouldn't be nearly as much backlash. That's going to upset some people, but it's true.

Also, if you yourself are an Instagay, you can't use the word Instagay as a derogatory term. Look at the last five posts on your IG and if any of them are shitless, pantless, tongue out or have some caption that has nothing to do with the picture, I'm talking to you. Keep that in mind next time you start bitching.

The good news is, Aaron is out of the country and hopefully will be for a while. That's all I have on this one. Now if you'll excuse me, I'm going to go check out these chocolate chip cookies my mom has in the kitchen...