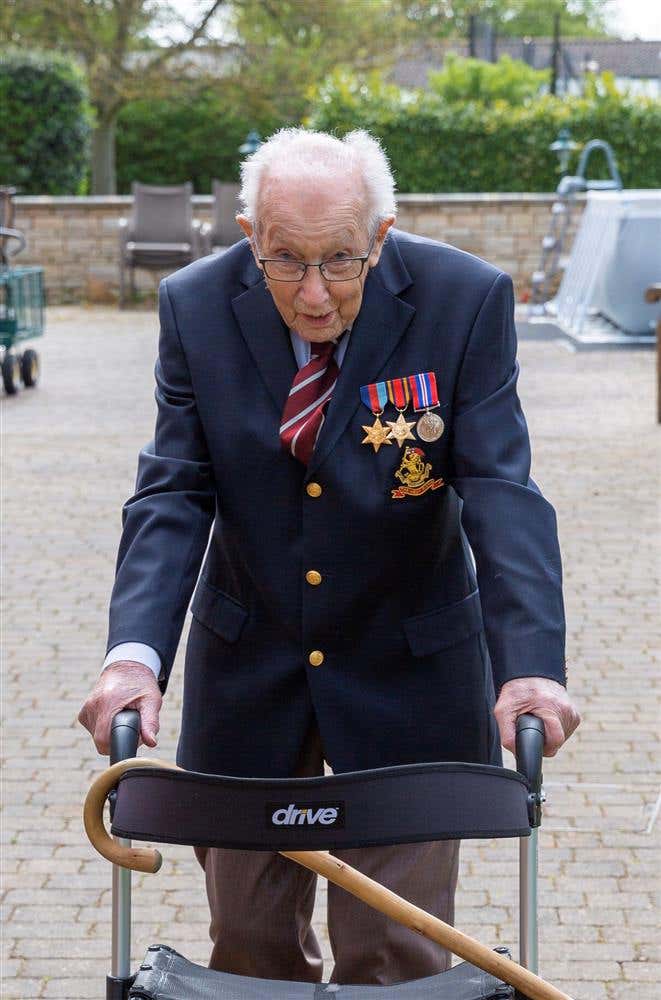 NPR - Tom Moore, who rose to the rank of army captain while serving in British-ruled India and Burma, set out to walk 100 laps of his back garden in Bedfordshire, around 50 miles northwest of London, before his 100th birthday on April 30.

His original fundraising target was $1,250. His family said the fundraising site JustGiving had to stop the "Captain Tom Moore's 100th Birthday Walk for the NHS" page from crashing, as more than 90,000 people tried to access it at one point.

The site crashed because so many people were trying to donate money at the same time! If that doesn't put a smile on your face, there's something wrong with you. I mean, this 99-year-old vet - a man who's already given so much of himself for other people - decided to walk 100 laps in 10-day increments for his 100th birthday in order to raise a little over a thousand for U.K.'s National Health Service.

Not for nothing, but for a 99-year-old man, he's hauling ass! Those are the £10 million strides of a man on a mission of gratitude.

The money will go to NHS Charities Together, a collective that supports the medical staff, volunteers, facilities and patients of the NHS, Britain's publicly funded healthcare system, which was created after the Second World War.

Moore decided to use the fundraising challenge to thank NHS staff for helping him recover from a recent hip replacement and skin cancer.

At almost 100 years old, an age during which most people aren't even capable of caring for themselves, Captain Moore is thinking about how he can thank those who have helped him.

And even those of us he's never met.

"Let's all carry on and remember that things will get better," Moore told BBC News. "We have had problems before — we have overcome them — and we shall all overcome the same thing again."