So this tweet has been making its rounds the last few days as everyone points and laughs at Dave Gettleman on Twitter, which has been the case for years now. But I honestly can't understand why because I think Gettleman CRUSHED Tom Telesco's setup. The only reason I can think of is ageism, which is pretty much a federal crime in 2020.

On what planet do you need five computers for anything? You know how if you have two quarterbacks, you really have none? Well if you have five computers, you really have none. Do you want a GM that has no computer running your NFL team? Fuck no! If you work in the cubes of even a moderately sized company, you know at least one person with multiple computers and monitors on their desk. And you know what that person spends their entire day doing? Talking about their multiple computers and monitors on their desk while doing just as much work as everyone with one computer. I'd be impressed if Tom Telesco had some sort of Doctor Octopus contraption on that allowed him to use every computer at once.

But without it, he's just a hardo with a bunch of extra keyboards and monitors wasting valuable energy and WiFi that could be better allocated by people trying to find a cure for the coronavirus.

Now lets take a look at what Dave Gettleman is working with:

Now THAT is a desk of a Football Guy. True gridiron grinder shit. DG has everything you need to draft and nothing you don't. A well-oiled machine that embraces the sabermetrically-friendly K.I.S.S. Method (Keep It Simple Stupid) that includes:

- One Franchise Computer That Puts The Whole Team On Its Back: If the draft clock is winding down and you need to look at that one note about a prospect, Davey G isn't shuffling between different computers on different OS's. He has his ol' reliable Thinkpad ready to rock, which is pretty much the Eli Manning of computers. Not flashy or cool. But an absolute rock that will get the job done as long as you have something to protect it from viruses/pass rushers. Dave Portnoy built a media empire hunched over a single laptop and I see no reason Gettleman can't do the same for a Super Bowl champion.

The Gettleman haters, of which there are clearly man, will say drafting using one computer is risky since you will be running Zoom, which could slow down everything else you are doing. Well what if I told you that Dave Gettleman not only has already conducted a draft remotely

And in two seasons would have a 15-1 team that was one Cam Newton recovered fumble from potentially winning the Super Bowl.

- Post-It Note Almost Definitely Filled With Passwords: There will be no hacking DG's emails or personal information. Sure if he loses that small yellow piece of paper, he will be locked out of every website on the internet because he won't be able to access anything. But in an increasingly dangerous online world full of hackers looking to steal peoples' identities, keeping all your personal info accessible offline is the way to go. Plus I guarantee the phone numbers of all four, count'em FOUR, of Gettleman's computer folks are listed there.

- A Zillion Papers Along With The Biggest Binder In The Universe: This one made me laugh the most because I can guarantee not one of those pieces of paper have any actual notes on them. If I have learned anything from the Gettleman Era it's that he likes who he likes, no matter what some paper or all of Football Twitter says. Gettleman is the guy who rolls into your fantasy draft with the ESPN fantasy football cheatsheet that he just uses to cross off who has been picked. He also picks about three players that have already been drafted every year and says "Ahhh fuck it" before taking a Defense 3 rounds before anyone else does. But make no mistake, that rainforest worth of papers in a binder aren't for him. What are they for?

That's right. Tom Telesco can keep his fancy computers. I'm much more terrified of a guy that killed two printer toners on reports about how big a bunch of college kids' hands are.

- Bottle of Purell: I guess one GM is trying to stop the spread of the coronavirus and it sure as shit isn't Tom Telesco.

- Bottle of Lotion: Everyone's hands are living in a perpetual state of dryness as we scrub them to the bone every time we touch anything. So some lotion makes perfect sense at the workspace you spend most of your time at. Plus if you fall in love with a player on film, sometimes you gotta blow off some steam so you can think clearly. Some would call that the JJO strategy. If Gettleman cracking stick is what's needed to prevent him from using the Giants' number 4 pick on yet another defensive tackle in Derrick Brown, I can live with it.

In case that absolute beatdown didn't convince you that the Giants are in great hands on Thursday, this quote from Bills GM Brandon Beane should on the hit ESPN show Pardon My Take. 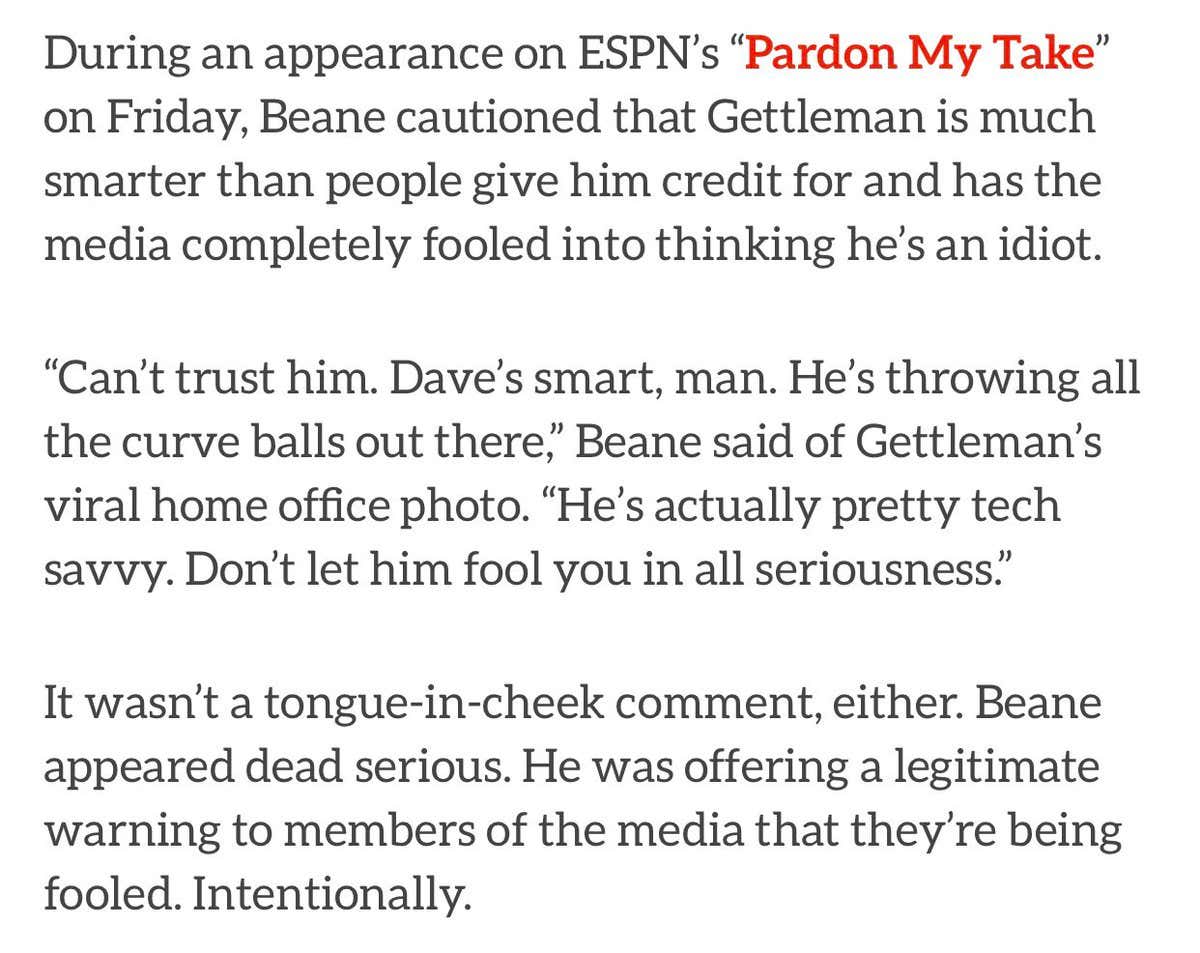 Is Dave Gettleman the Keyser Soze of GMs? Because all I've been reading about is how dumb he is while almost all the players he traded away while trying to save the Giants from the Cap Hell that Jerry Reese sentenced them to have either been released, are on the trading block, or are being comically overpaid by the Redskins.

While his two Giants drafts have included picking the best running back in football (regardless of where he was drafted) and a quarterback that went 3000/24/12 in only 12 games and led rookie QBs in passing TDs (regardless of any other stat he may have led rookies/the league in).