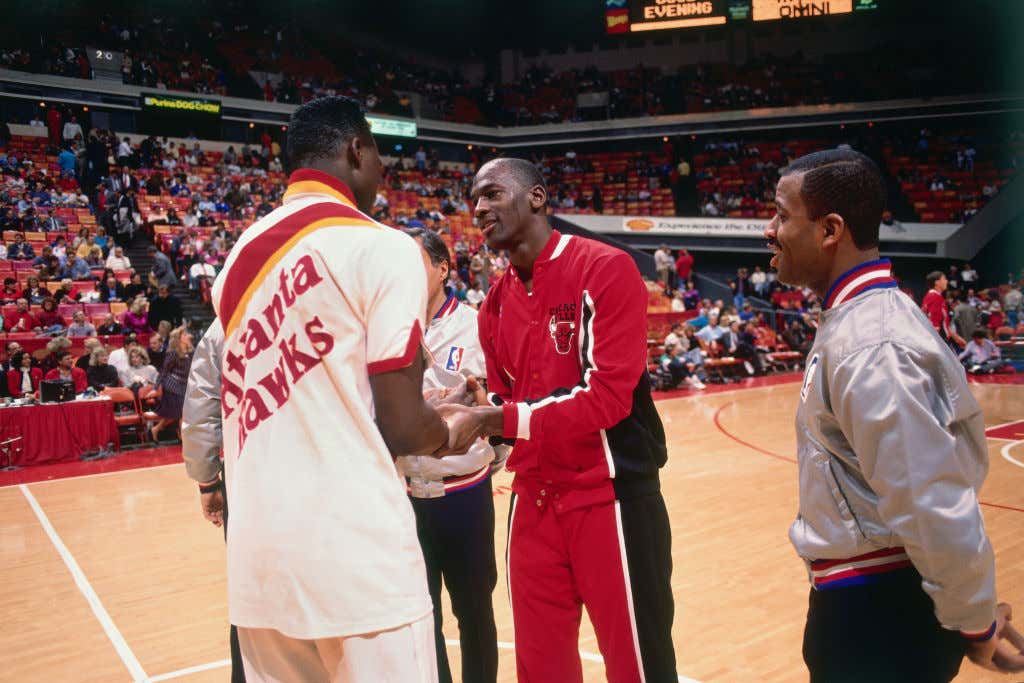 (The Athletic) - Dominique Wilkins, an NBA legend with the Atlanta Hawks and long-time Jordan contemporary who lost to Michael in that famous 1988 dunk contest in Chicago, said there was nothing special about their first meeting when they played against each other in college (Wilkins went to Georgia), but this memory stood out from early in their pro careers:

“He was something else, something else, man,” Wilkins said. “I remember him walking into our locker room in Chicago (April 1987) and he walked right by me. And I’m like, what the hell is he coming in our locker room for? And he walked by me, walked by Kevin (Willis), and he tapped Randy Wittman on the leg and he said, ‘Lace ‘em up, it’s gonna be a long fucking night.’ And he walked out. He had 60 that night.” (Actually, Jordan scored 61 points that night, tying, at the time, a career-high.)

As we inch closer and closer to the release of the MJ Documentary, I have been absorbing all these Jordan stories like a sponge. They all sound so outrageous and the fact that they are all true just goes to show what a monster Jordan was. We knew that already, but take this story from Dominique Wilkins. In 1987 Jordan had a total of 0 NBA titles. It should be noted though this was the first of 7 straight seasons where Jordan averaged at least 30 and won the scoring title. He was 23 when this went down so even though he didn't have the championship hardware he was still very much a monster (averaged 37 that year). He'd make another All Star team, All NBA 1st team, and come in 2nd in MVP voting behind Magic.

So the fact that he was so cocky at such a young age makes some sense, and to me its stories like this that make me love MJ even more. It's one thing to talk shit, plenty of players do that. But it's a special breed that goes to go into an opposing team's locker room and says something like that and then comes out and drops 61 points right on their face. That's some Larry Bird type shit. Fortunately for us the internet exists and we have some actual footage of MJ vs Dominique in that game (who had 34 and scored his 10,000th point)

Jordan wasn't too shabby either with his 61, but he also topped 3,000 season points in this game (2nd player ever to do that) while also scoring over 23 straight points at one point. I dunno about you but I could watch MJ highlights until my eyes bleed, but they are so much more fun when you have the background story like Dominique gave here.

That's why I cannot wait until Sunday. I have a feeling we're going to look at MJ in a completely different way once that series is over. Hopefully it has more stories like these, because I think it's safe to say that during this quarantine they may as well be crack.