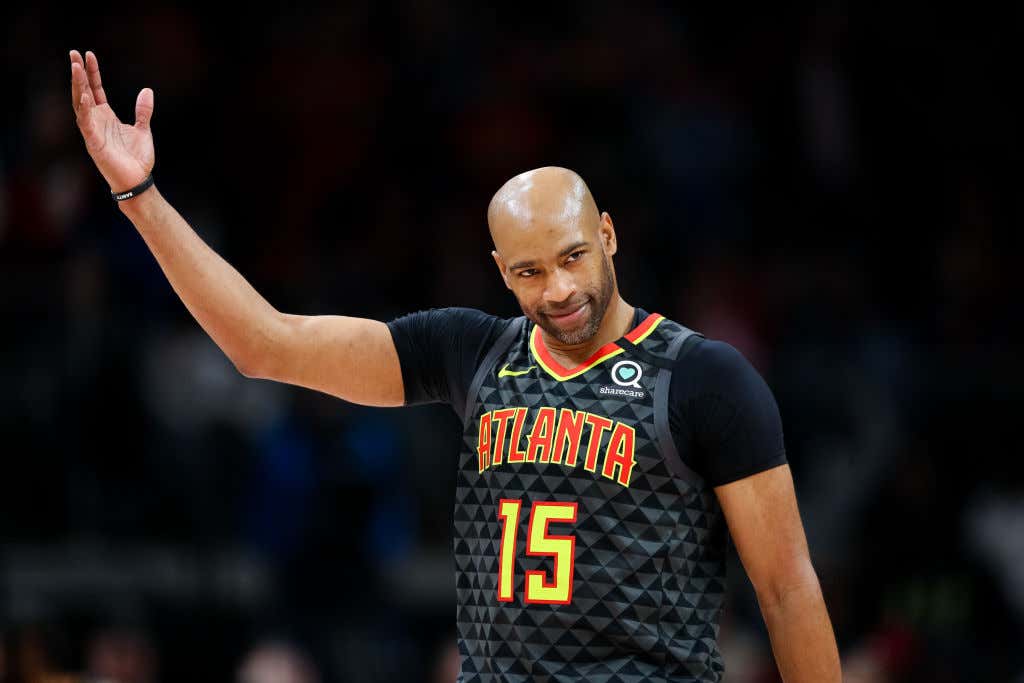 Of all the basketball reasons this current hiatus stinks, near the top has to be the raw deal when it comes to the conclusion of Vince Carter's career. Tonight the Hawks were scheduled to face off at home against the Cavs in what would have been Vince Carter's final NBA game. While I don't think he was about to go nuts and pull a Kobe and drop 60, it still would have been an awesome moment to watch. My guess is he probably would have gotten the start and everyone would have demanded he shoot the ball every time he had it.

It sucks that we didn't get to see Vince return to Toronto for the last time on April 10th as well, but that doesn't mean we can't have a quick shoutout blog for the guy. I mean you play in 4 SEPARATE DECADES, have a first ballot HOF career and are one of the most influential players of the 2000s, you deserve at least that much. When you look at the NBA landscape, who is another player that you expect to be playing at 43? There's LeBron....but then who? I don't think Udonis Haslem or Kyle Korver are going to play 4 more years. JJ Redick looks pretty good and he's 35, but does he have 8 more seasons left in him? Probably not. What Vince Carter has done is pretty remarkable, he's the 4th oldest player all time (Nat Hickey, Kevin Willis, Robert Parish finished older) and honestly he aged pretty well. Even now in 2020 he's had his moments on the court and there are plenty of guys that look way worse in their late 30s than Carter has looked in his early 40s. That doesn't exactly make a whole lot of sense but it's true.

I also respect the shit out of the fact that during the home stretch of his career Vince Carter never ring chased. He spent ages 38-43 on MEM/SAC/ATL. As one of the greatest players to never win a ring, nobody would have blamed him if he simply joined the Warriors or some shit. But he wanted to play, he wanted to be a role model in the locker room and chose to a different path. I think that's pretty cool.

So even though there's no farewell game and moment tonight, take some time and celebrate one of the true legends in the NBA. There's no denying that from 1998 to 2020 Vince Carter had one hell of a career.

Am I crazy for hoping that this whole situation somehow convinces him to come back for one more year once the league starts back up again? Probably, he's basically already locked in his broadcasting career, but as someone who loved watching him play a guy can dream.