We've spent a lot of time at Barstool Chicago today talking about Frank Thomas and 90's baseball. It started earlier this morning when the news started circulating that Frank Thomas was an objectively better hitter than Mike Trout through their first 8 seasons.

The internet was shook. WSD took the blog to add context to Frank's greatness while explaining his '94 season was on pace to be the greatest season ever. One thing leads to another and I'm down a 1990's Chicago baseball rabbit hole deep through the afternoon. It wasn't until radio was about to start until I uncovered something remarkable: Kyle Farnsworth gave up 28 home runs in 130 innings in 1999. People forget he came up as a starting pitcher and got his shit rocked to the tune of nearly 2.0/HR's per 9 innings = dead last in MLB.

Now, you could argue people forget that about this version of Kyle Farnsworth for a few reasons. Notably, it was 21 years ago. Also, the '99 Cubs won 67 games and finished dead so you're kind of obligated as a Cubs' fan to remember nothing. And then even more compelling, Farnsworth went on to relieve the rest of his career that includes almost 900 appearances over 16 seasons so we're really talking about a robust body of work. It would make sense to forget/have no idea how it started.

But really the #1 reason people don't know remember Farnsworth's 1999 rookie season is because he effectively murdered all of your memories alongside Paul Wilson's upper lip in June of 2003. The second this fight broke out you knew Kyle Farnsworth would forever and always be This Guy

And honestly I don't think he would have it any other way. You're looking at the maximum glory a set up man can achieve at the height of the steroid era: smashing Paul Wilson's stupid goatee into the back of his throat. That's the 7th inning apex in 2003, and chances are it all started because Wilson said some dumb shit about Farnsworth's puka shells 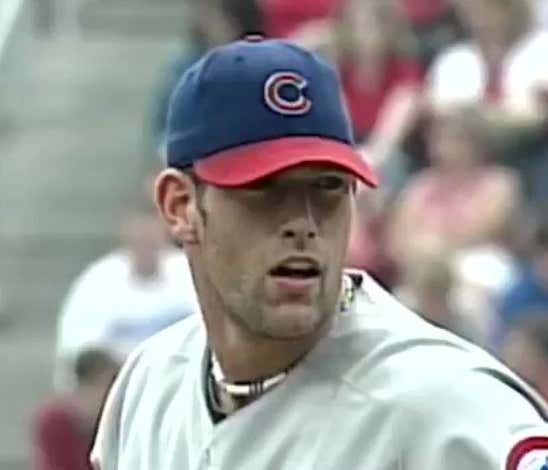 Probably not the first time someone got beat up in Cincinnati over a necklace from Abercrombie but that's a different blog. For now let's just agree that this was awesome.