Source - Don’t be shocked if you see more Buccaneers jerseys moving forward, New Englanders. Despite Tom Brady’s exit from the Patriots, people from New England states are more interested than Floridians in Brady’s Buccaneers jerseys, according to data collected by Betonline.ag. The data, researched using Google Trends, was collected over the past month.

Here are the top 10 states:

And here’s map showing interest in Brady Buccaneers jerseys across the United States: 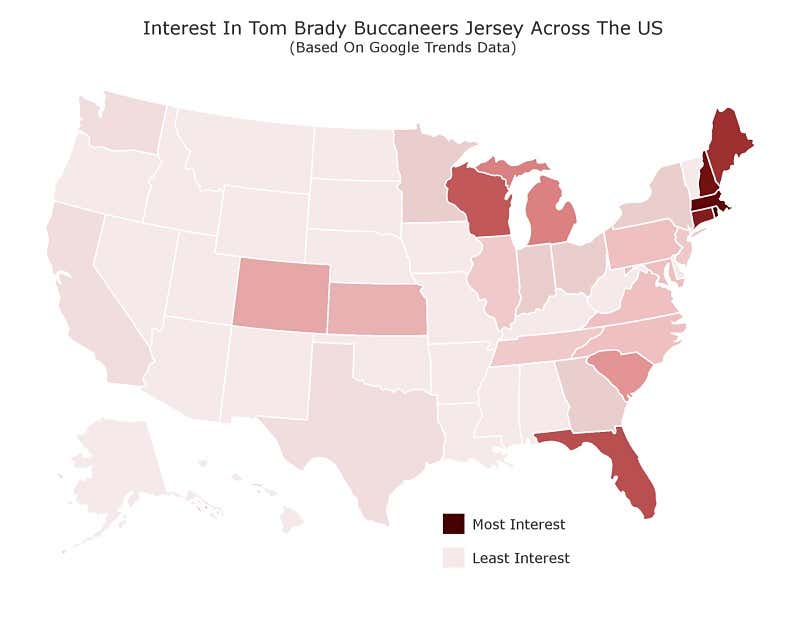 I've heard Dr. Drew Pinsky say that the concepts of fairness and unfairness develop in all children around the age of four and the expectations that life should or has to be 'fair" goes away about about age eight in well-adjusted children as they mature. With that, I'm not about to argue that it's unfair a place like Florida gets the greatest athlete of all time and can't even appreciate it, because I'm not eight. But I will say that this state filled with podunk, backwoods, meth-mouthed, double-wide, Dreamcatcher-hanging, Affliction-shirted ingrates doesn't deserve Tom Brady. The data on that is clear.

These sun-baked yokels ought to be crawling on their hands and knees to the WalMart (while staying safely six feet apart) to buy Brady jerseys by the shopping cart load. Even if you allow for the fact that the Buccaneers are splitting the state with the Dolphins and the two dozen or so people who self-identify as Jaguars fans, this is inexcusable. This is the third biggest state in the union, with more than 21 million people. Massachusetts can't crack 7 million. They can't even gin up enough interest to outsell New Hampshire or Rhode Island, who have like 2.1 million combined. Hell, half of Connecticut is Giants territory, and they're outselling Florida.

And, just as a reminder in case anyone needs it, Brady is the guy who moved out of here while there are still championships to be won. Because, like so many New Englanders, he wants to semi-retire to the Sun Coast. And still we're buying up his red, black and pewter gear more than the people he's playing for. But that's us. Loyal to a fault is how we roll.

I guess we all just overestimated the interest in having the GOAT around. Or there's too much competition for the fan loyalty down there coming from the Rays and Lightning. Or perhaps Bucs fans still haven't gotten over the departures of late '80s Vinny Testaverde or 2000s Brad Johnson and aren't ready to love again. All I know is they don't deserve Brady. But I guess deservin's got nothing to do it with it.

Still, Florida, you can redeem yourself. But these instead.