Goodness gracious. That's the last time I take a tweet literally. When you see five white guys in a video with the caption "they just shooters" you assume "they just shooters." We're a people plagued with Osgood–Schlatter disease and a stunning lack of athletic ability. Jumping high isn't part of our DNA, so I'm sure you can understand my confusion when they moon bounced over the competition.

I did some research on these guys and here's what Google (Reags) had to say:

Agreed, but they can dunk which is all that matters now that NBA no longer exists. I feel like part of it is that they're unafraid. Like if you're over six feet tall, which these guys are, you can get rim. All you have to do is hold on when you're going full speed and it looks sweet. I used to do it all the time when I played in my old mans league in Norwood, MA. It was awesome. Not one sixty-year-old on the court contain me. Anyway, I was going to end this blog on a positive note, but then I saw what number five did after he dunked on his 5'7" competition. 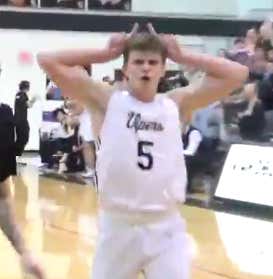 Yikes. Pick on someone your own size, dude.