It was only a matter of time before someone in the Boston or New York health care communities responded to John Henry's Boston Globe questioning the usefulness of the 1.7 million masks the Kraft family flew back from China. I mean, Globe reporter Dugan Arnett managed to point out "Fears of counterfeit masks run rampant, and many doctors are concerned they would put workers at risk," and track someone down who said the KN95 masks are “not gold-standard, and gold-standard really matters when lives are on the line.” But somehow didn't find the time to go to the doctor with the responsibility of running the "gold standard" among all the hospitals in the world. The hospital that was a recipient of these masks that the Globe deemed inferior. The one that is pretty much right in the Globe's backyard: 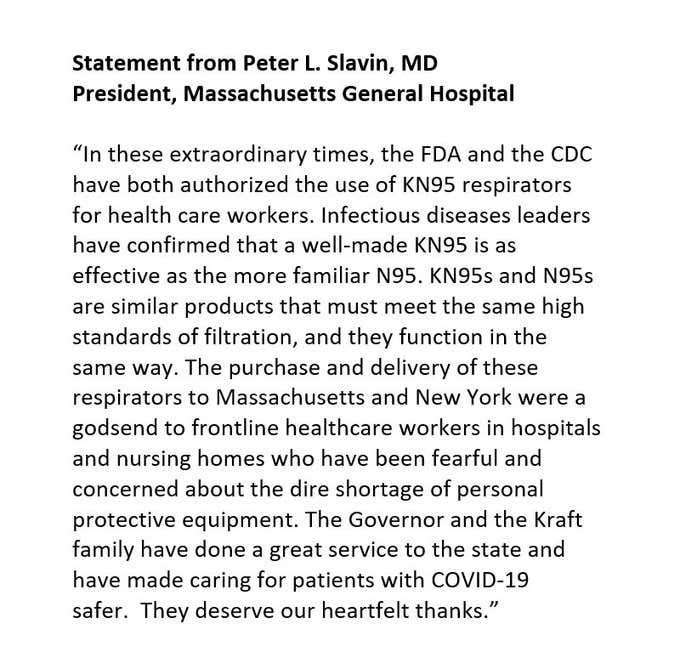 Huh. I guess John Henry's most dependable reporter for all anti-Kraft hit pieces couldn't be bothered to talk to the most respected experts in the field who were an email away. Or if he did, he didn't include the stuff about the KN95s being "a godsend" or how "the Kraft family have done a great service to the state." The line about how the Patriots' efforts "have made caring for patients with COVID-19 safer" somehow didn't make the final edit of the published piece. Curious.

Not to mention, we've got a doctor with the weight of the world on his shoulders and hundreds of lives depending on what the institution he runs does during this time, having to take time out of his day to respond to this report. A report that casts doubts on the effectiveness of the very critical medical supplies his staff are depending on. And undermine public confidence in the Personal Protective Equipment he considers "a godsend." All to placate the bruised ego of a bizarre, translucent billionaire who owns a sports group and a newspaper. It's an outrage.

Every so often when I touch on this topic, I'll get someone telling me John Henry has no say in what gets published in his newspaper. Which has to be the most ridiculous statement ever made. The idea that the guy whose signature is on the front of everyone's paychecks would have no say over what his employees put in his publication is not only naive, it's preposterous. And flies in the face of the hyper critical coverage of the football team in town and the fawning coverage of the baseball team. Not to mention every movie ever made about the newspaper business from "Citizen Kane" to "Spotlight." If you don't believe me, ask Michael Rappoport how his Barstool career went after he took dump all over the loyal readers and listeners who keep the lights on around here. He'll be by with your take out delivery in a few minutes.

This was yet another attempt by Henry's employees to please the boss by trying to discredit the Kraft family. And yet again it blew up in his face like a cartoon cigar. I'd suggest that they quit trying, but I long since realized they - and Henry - don't know any other way.