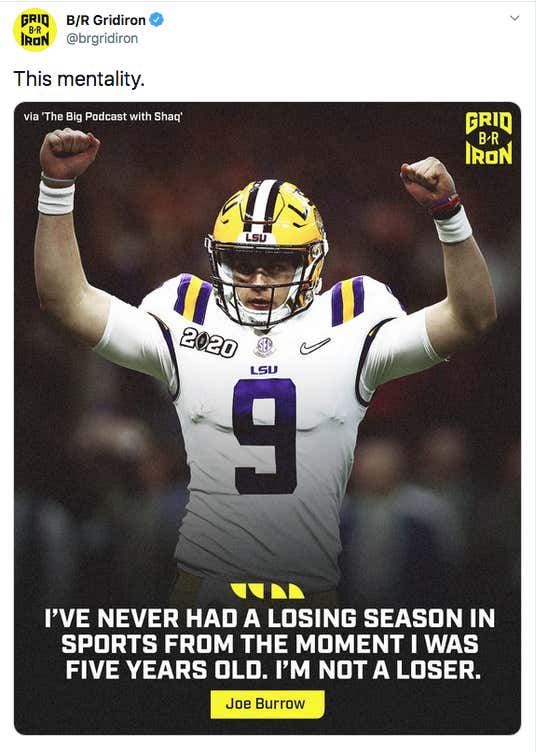 What happens when an unstoppable force meets an immovable object? Because that's apparently what's going to take place when never-before-failed Joey Burrow gets drafted into a Bengals organization that hasn't won a playoff game since 1990. They went 2-14 last year, folks. Something's gotta give. But before we get too far into the meat and potatoes of the discussion, let's get one thing straight: Joe Burrow having "this mentality" is nothing new for quarterbacks coming out of college. It's nothing new for the NFL in general, but specifcally nothing new for anyone in the AFC North. You know who else was going to "Wreck This League"?

SEC quarterback.......Heisman winner......and a ton of confidence. Hmmmm, I think you could connect the dots here. Toss 21 interception Baker Mayfield into the mix too as he fits most of that mold.

Look, I'm really not comparing the douchebaggery of Johnny and the cockiness of Baker to Joe Burrow. I think Burrow is better than both of them, and MUCH more level-headed, but he did say this in regards to being drafted by the Bengals.....

"I've never had a losing season in sports from the moment I was 5 years old. I'm not a loser".

I like the answer and I'm not sure what I'd rather him say, but Joe, let's not act like the soon-to-be #1 NFL draft pick having a successful youth, high school, and college career is anything different that 90% of other QBs coming out of the draft. You played at Ohio State and LSU……obviously you have winning seasons there. And it's not shocking to me in the slightest that a QB going on a full ride to one of the best programs in the country had a pretty successful high school career, too. Makes sense. And I think one could fathom that he was probably a pretty good youth player, too. It all adds up.

Do you think Tua was 4-6 in high school? Do you think Kyler Murray's youth team couldn't win any games? Even Jake Fromm was hitting bombs in the Little League World Series. I bet his Pop Warner team was okay, too. Superstar athletes in the pros were generally pretty good as kids, as well.

I don't know. I don't mean to harp on the guy. I really like him as a person and as a player. But you're going to the 2-14 Bengals, buddy. You gotta play the Browns, Ravens, and Steelers twice a year. You're not having a winning season next year, regardless of how good your youth baseball teams were growing up.